Avia homebrew PC, gets a work out! Grahame Shannon, who’s been discussed here as the developer of Avia Design software, recently put together a PC, comms, and sensor system — details here — meant to showcase his latest AviaSail program.  Then he went racing across the Pacific with it, which turned out to be quite the test of gear, boat, and crew, documented here.  Grahame kindly sent along this report: 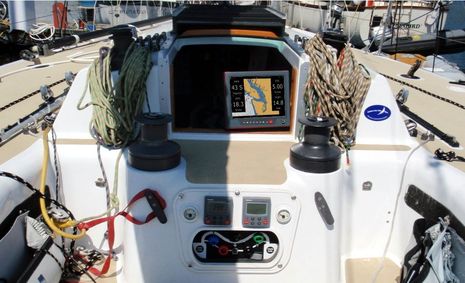 I have just returned from a 1000 mile offshore heavy weather test of our software combined with a homemade fanless solid state disk PC, and the Airmar PB200 and DST 800 sensors. We started out to sail to Maui in the Victoria to Maui race, but dropped out after 3 days of gale force winds, mainly due to water ingress into the boat. We then sailed to San Francisco. The full story is at www.bluebookofboats.com/blog

Although the computer was adjacent to the companionway, in a non watertight desk, it performed splendidly throughout the ordeal as did the NavPixel touchscreen, which was repeatedly doused with salt water. Lots of water came down the hatch, wetting our bunks and sleeping bags. The furnace and engine were both put out of operation by salt water, and our Aquair towed generator had a wiring short. We did manage to fix that so we could generate power for the computer, which uses about 2 amps on full brightness. Once we got in smooth water near SF we got the engine running again, only to run out of fuel under the Golden Gate in 30 knots of wind. Exciting.

The NMEA 2000 network was fine, as was the translation from NMEA 2000 to 0183 which was used to feed the Standard Horizon VHF/AIS receiver and the Raymarine autopilot. The AIS data came back in as well. The computer has 2 “real” serial ports. Data repeated via wifi (Asus portable hub, seen below) to iNavX on my iPhone and to my netbook which was used for route planning and navigation with Coastal Explorer. Avia Sail acted as the gateway to allow wireless use of Coastal Explorer and works with other navigation software as well.

We have an Icom 802 SSB and Pactor USB modem and were able to send and receive emails using the netbook and SailMail. In 8 days at sea I never recharged the Asus eee Netbook–great battery life. Our Satphone was used after we dropped out of the race, to let the families of the 5 crew know we were OK and heading for SF. It worked just like a cell phone, just more expensive!

Our track was on the internet thanks to the Spot Messenger, which functioned flawlessly, but you must remember to restart the track mode every 24 hours. We hung it in a drybag on the stern pulpit.

The PB200 wind speed and direction worked exceptionally well, and the Raymarine was able to steer a good course from the wind data. The gyro really works well. The heading and GPS data do not seem to be gyro stabilized, and COG, SOG and HDG were all over the place in big seas, although they were ok in smooth water. Obviously Airmar have the technology, as the wind data was very steady even in the worst motion. (The DST 800 reads exceptionally deep, and several times we had bottom reading in over 1000 feet of water.) I contacted Airmar support on the isssue and they recommend a separete below decks heading sensor. I’m guessing that applies to GPS too. So much for the simple “only two sensors” approach we tried.

The AIS worked OK, but for most of the trip was blank. We never saw another vessel from 50 miles off Cape Flattery until 25 miles off San Francisco. There is nothing out there! In summary the technology was more reliable than the power source. The next time I go offshore I’m going to insist on a boat with a dodger or better yet a pilothouse.

{Big thanks to Grahame}