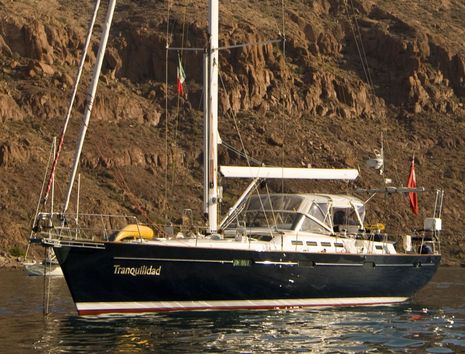 I think you’re going to be amazed at how many NMEA 2000 sensors and displays Jeremy Anwyl has managed to install on his lovely sloop Tranquilidad, though probably not surprised that they haven’t all played together perfectly.  In fact, when I wrote the first entry on N2K bridges I joked that Jeremy’s soon-to-come guest entry on the subject might be sub-titled “One brave man’s experiment with a CANbus bridge, and the issues that drove him to it!”  The publishing delay is entirely the fault of your easily distracted editor, but the good news is that Tranquiladad did some cruising over the holidays and Jeremy has more testing results he can add to the comments that will no doubt follow his initial bridge experimentations…

Jeremy Anwyl:
I should admit upfront that I am a bit of a tinkerer. My wife and I purchased a Beneteau 57 sailboat back in 2005 and I have been messing with it ever since.
One of the more extreme projects three years ago was to replace the boat’s standard aluminum mast with a carbon mast from GMT. Pulling a mast affords a great opportunity to replace the devices at the masthead. Upgrading to a LED tricolor/anchor light/strobe from OMG for example.  Another upgrade was an ultrasonic weather station from Maretron. Being a NMEA 2000 device, this was all the excuse I need to start down the path of installing a NMEA backbone. And, of course I would need a Maretron DSM200 to read all the data coming from the weather station.
Looking back, this all seems a very long time ago. I really bought into the ideals of NMEA 2000 — that devices from different manufacturers could all cohabitate. Sensor data from one manufacturer’s device could be shown on another’s display.
Reality, as I found, is a bit more complex. I don’t have to point out to readers of Panbo that being compliant with NMEA is no guarantee that a display will be understand every PGN (necessitating different displays for different data).  Props to Maretron for their DSM 250, which is the most comprehensive display I have seen.
But reality didn’t stop tripping me up there. I have been learning through hard experience as I have added and upgraded all sorts of displays and sensors. Here’s a list of what is currently installed:

I was very careful to follow best practices when installing the network. Even so, as the network expanded, I started experiencing weird behavior. The most troublesome was that various devices would randomly drop off the network. They would stop transmitting — for no reason I could discern.
This first occurred with my Floscan Flonet device. Later with my ST70 pods. Then my Lowrance EP-85. I also found that when connecting the Maretron ALM 100, bus errors would skyrocket. On top of all this, my ST70 displays would randomly lock up, or reboot–and often lose settings in the process.
I would check with each manufacturer’s tech support. I would get allusions to capacitance issues. Or impedance issues. Or timing issues. Or reflections.
None of which meant much to me.
Maretron’s tech support has been one of the best and is very responsive. Especially as I often call with questions about other manufacturer’s devices. They suggested upgrading my backbone from micro to mid cable. This would reduce any voltage losses and minimize impedance. They also suggested snaking the backbone through the boat to reduce drop cable lengths (to help with reflections). And finally, to try to use the same cable wherever possible.
This project was dutifully completed. And I did see my error count drop. It further dropped when Raymarine released software V 3.03 for their ST70s.  (Version 3.03 is finally close to stable, so it is worth noting not all problems are related to cabling.)
But still I would have devices drop off the network (and continuing to add more devices made the problem worse).
Things really deteriorated when I installed an Airmar PB200 (after reading some glowing reports on Panbo).  I received one of the first PB200s not to have the terminating resistor in the PB200. NMEA decided this was a bad idea and to comply with NMEA dictates, Airmar now offers the resistor as an option in the cable — not the device.
After installation, I found that when the PB200 was connected, the network error count would soar and devices would drop off the network. Disconnect the PB200 and the network would be much more stable. Finally, I tried the crazy idea of installing an inline resistor at the base of the mast. This actually worked — mostly.
What I am learning is that impedance and capacitance are real issues. Mixing cables, for instance, is known to create problems. (Hard to avoid when some devices come with a cable attached, or when devices use proprietary connectors.)  Some devices use “ceramic” versus “crystal” oscillators, which apparently can cause timing mismatches.
Through all of this I have become what I would term as “subject matter dangerous.” I have learned the issues, but not enough to really know what to do about them.
One thing that occurred to me was the notion of breaking the network up into smaller components and finding some way to bridge them together. Smaller networks, my reasoning went, would help isolate problems and perhaps bring any capacitance and impedance issues within norms.
The problem was that I had never heard of a NMEA 2000 bridge device. I asked around and learned the idea wasn’t completely novel and that if I waited, perhaps next year, one or two might be introduced.
But wait a minute. Isn’t NMEA 2000 a set of specifications based on the CAN bus standard? CAN bus networks play in a much bigger arena that just the world of boating.
Digging around on Google, I quickly found CAN bus bridges do exist. One company, ICP DAS-USA was located here in Los Angeles and offers a whole host of CAN bus gizmos (That is gizmos with a small “g.”)
Taking a chance, I ordered their CAN bus bridge (the I 7532) which is priced around $350. 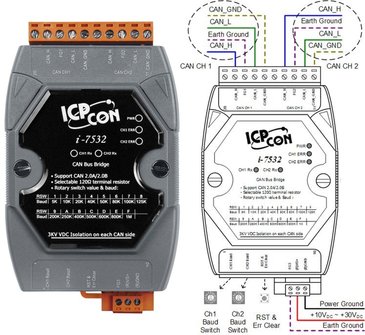 Installation only requires power and a connection to the CAN L and CAN H and shield of both buses. There is the option to power the device from the network, or to power the device and each network separately to manage any long voltage drops. This second option also allows one bus to be powered down without affecting the other.
So installation is simple, but does the bridge work?
For my boat, the idea was to create a small network for the troublesome Airmar PB200 and four Furuno displays on the mast. This would then bridge to the remaining primary network. I made the connections, powered everything up and…everything worked. (I use Maretron’s N2K Analyzer to see what is happening on the network and Maretron’s DSM 250, which can count system errors.)
Everything worked, that is initially. The Floscan and Lowrance EP 85 stayed up on the network. But I found the PB200 would still drop off several hours.
I then set the PB200 up on a network by itself. This seemed better, but still not quite right. I am really getting suspicious about the resistor that is inside the Airmar supplied cable. What is crazy about this NMEA requirement is that troubleshooting this is very difficult. To check the cable resistance, I need to disconnect the PB200. This would require going up the mast and trying to reach out to the end of a wand extending up and forward of the mast. Something I am not looking forward to doing. (I installed the PB200 when the mast was again out of the boat.)
Other than the PB200, the rest of the network is doing well. So my bridge idea was not completely crazy. I have continued to test and so far what works best is the PB200 on one end of the network and the bridge on the other with termination at the bridge enabled. I then connect the Furuno displays as a spur via a tee connector. It is a long drop cable length–probably over 12 feet but seems more stable than a network with the PB200 at one end and the displays at the other, connecting to the bridge via a tee. I have no idea why. After testing for a few days with setup means that the Floscan and EP-85 remain online. Progress!
So what have I learned? First, that I really like Furuno’s approach to terminating resistors. (With the FI series displays, they can be enabled or disabled via software. It would be a wonderful if I could to troubleshoot my PB200 using Airmar’s weathercaster software.) NMEA, are you listening?
Second, that even with a bridge, each network is not completely isolated from the other. If they were, why would the configuration of the PB200 on bus 1 affect the Floscan or Ep-85 on bus 2? Again, I am way over my head here…
Finally, I have learned that a network bridge is a useful solution. Not only can I (partially) isolate a troublesome device and troubleshoot without bring down the whole network. I can also set up a separate network for low priority devices. Battery monitors, switch monitors, tank level sensors, etc. These can then be bridged over to the primary network. (Something I am planning on trying next.)
Or I could set up a second network for devices used underway that could be shut down when at anchor to save power. And finally, bridges are a way to break the bounds of NMEA 2000 backbone lengths and limits on the number of devices.
There are NMEA 2000 bridges being introduced. Some will offer data filtering w
hereby you can control which PGNs get bridged from one network to the other.
But in the meantime, I would recommend CAN bus bridges to anyone who needs one now.

{How about a big Panbo hand to Jeremy for sharing his experience!  Also, I’m pretty sure he’s willing to answer followup questions and also to catch us up on what he’s discovered since he wrote this in early December — Ben}