A hot room and air conditioning fans on high blowing warm air isn’t a good way to start your day.  About two weeks ago I woke to just that.  I knew something had to be wrong with the air conditioning but figuring out what involved a few wrong turns before finding what turned out to be a pretty obvious problem.

I’m a prima-donna when it comes to air conditioning.  Though I love the water and love living on a boat I don’t love the feeling of a warm damp boat.  So, little ruins my mood faster than a failure of the air conditioning.  In part because of my intolerance for air conditioning problems I’ve learned to maintain and perform small repairs of my AC units.  Have Another Day uses R-22 split-gas (meaning the compressors or condensers are in the engine room and the air handlers or evaporators are in accommodation spaces) Cruisair ACs.  There is a 48,000 BTU condenser serving two evaporators in the salon and pilot house.  The staterooms are served by 24,000 modulating (meaning it can adjust its output based upon demand) serving two evaporators, with one in the master and one in the VIP stateroom.

The salon and pilot-house evaporators are both controlled by a single thermostat in the salon and effectively operate as a single unit.  The staterooms have one thermostat per evaporator where each zone can run independently.   This whole system was installed in 2002 when the boat was built so the controls aren’t as sophisticated as what would be done now.  As a result, the stateroom units are wired such that all they do is send a signal back to the modulating compressor indicating that their respective zones would like cold gas sent forward.  These units don’t receive the normal errors for high pressure, low pressure, and low voltage that the more standard salon configuration does.  I’m getting a little ahead of myself, but bear with me, these details turn out to matter as I figured out what happened. Armed with only the knowledge the staterooms weren’t cooling I jumped down into the engine room to take stock of what was happening.  I quickly discovered the unit was trying to start for a couple of seconds and then stopping.  Being the pessimist I am I quickly jumped to the conclusion that the compressor has seized and I’m in for a hot and expensive day (or couple of days).  In addition to finding the compressor wouldn’t start I also found it was very warm.  At this point I shut the unit off and started dialing for experts.  I feel very fortunate to have great network of really competent individuals.  One of those people is Phil Gutowski of BoatRX who just happened to be pulling into one of the Beauforts (I’m not sure if it was South or North Carolina) after a 7 day passage from San Juan, PR.  I got in touch with him and despite my contacting him while he was pulling in he was kind enough to consult on my tale of woe and provide guidance. After talking to Phil and my friend Don who owns an HVAC company in the Chicago area I calmed a little and decided it was possible something less catastrophic was amiss.  Fast forward through some trouble shooting to find I have a badly clogged condenser system and it’s driving very high head-pressures.  On an R-22 system the head pressure should be between 200 and 300 psi.  It turns out my second unit was hitting the high-pressure limit switch at 425 psi.  It took longer than I would have liked to figure this out because there were some factors that lead me in the wrong direction.  The biggest of which is that the salon unit shares the same water pump and condenser cooling manifolds but it wasn’t having any troubles.   Ultimately, I think this was because of a small kink in the condenser discharge hose on the salon unit which constrained the already limited flow on that AC unit. Opening my strainer revealed a shocking amount of growth and mud in the strainer. As soon as I saw this I was embarrassed that I was several hours into troubleshooting and hadn’t started here.  So, with the strainer cleaned the system was fired back up.  The pressures had moved down but not enough for me to think I was in the clear.  So, it looked like it was time to flush the coils.  Have Another Day has been a freshwater boat most of her life and while condenser coil problems do arise from time to time it’s much less common than in salt water.  Hence I’ve never cleaned the coils on my AC units. 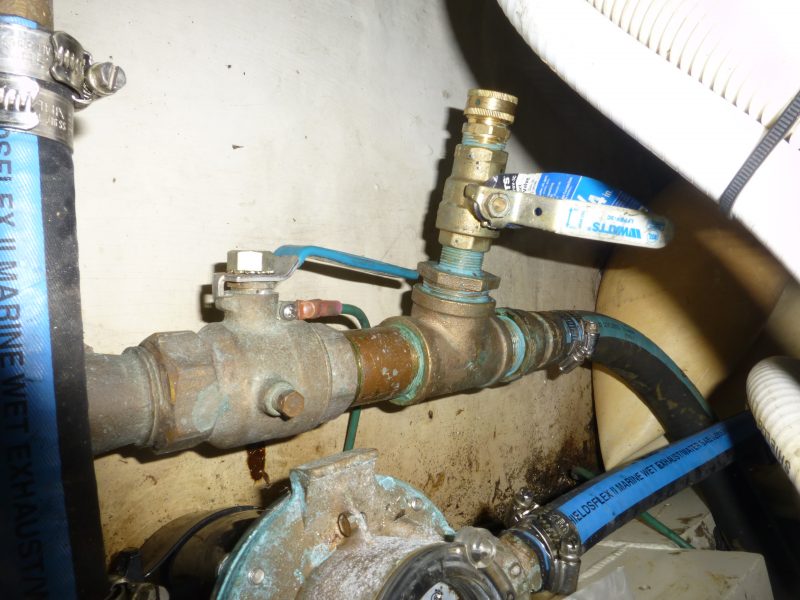 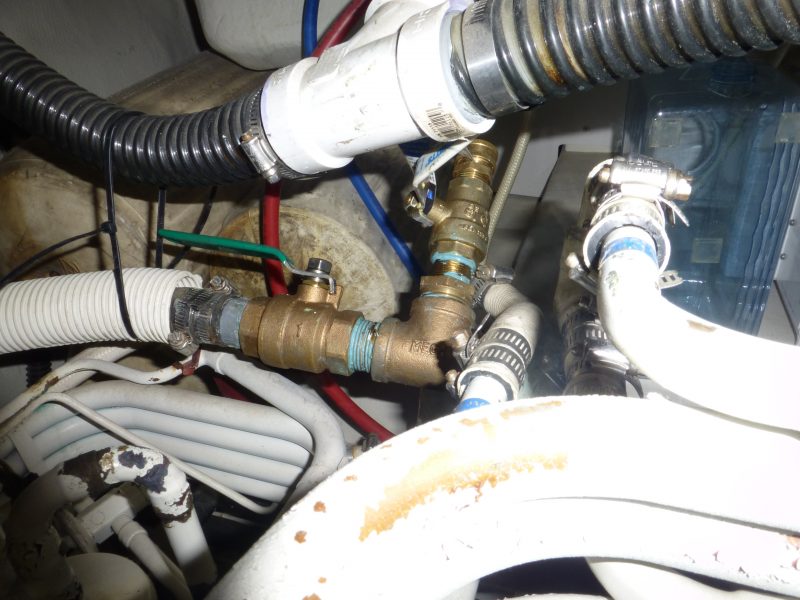 I took one look at the access to all the condenser hoses and decided I didn’t want to try and pull each of the three condenser loops apart and then reassemble them.  My friend Don mentioned to me that he had just modified the plumbing on his AC condenser lines to allow him to flush his units.  Using what he did as a guide I set out to find all the bronze bits I would need to build modify my plumbing to allow easy flushing of my condensers.  $300 in bronze later I had what I needed and set about standing on my head in the bilge to get them all installed.  In the left picture above you can see my intake plumbing.  I’ve added a tee fitting, bushing and 3/4″ valve with a garden hose adapter screwed into it.  In the right photo, I’ve added the same tee and valve arrangement but also a 1″ valve to close off the flow of water overboard. When it’s time to flush the system I close the intake seacock, remove the cap from the garden hose fitting and open 3/4″ valve connected to the tee.  I then make my way to the discharge side — behind the AC units with the only viable access gained by laying on top of the Seakeeper — and close the 1″ valve that stops water from being sent overboard.  Now I also remove the garden hose cap and open that 3/4″ valve.  Lastly, I connect hoses to both hose adapters and deposit them in a 5-gallon bucket full of Barnacle Buster.

The last modification I made was to put a toggle switch in my pump relay box to allow me to manually activate just air conditioning pump to circulate the flushing mix.  This time I let that mixture circulate for about an hour and a half.  During that time the mixture went from a nice light blue to jet black with lots of stuff floating in it. After completing my flushing I was thrilled to find the head pressure sitting right at 200 psi and the units both seeming to run noticeably happier.  I’ll add this to my routine maintenance list and complete a flush once every six months or so.  But, this also left wondering about how to monitor this better.  I don’t think most boaters carry a set of HVAC manifold gauges just in case their AC units have troubles.  I looked at a few of the NMEA-2000 pressure sensors out there and couldn’t find anything capable of handling enough pressure to reliably report on this.  If anyone finds one that can or if a manufacturer wanted to start making one I’d be very interested in getting my hands on four of them to ensure the health of my AC units.  After all, I’m a prima-donna and I don’t want to have to go without my nice cold air conditioning.