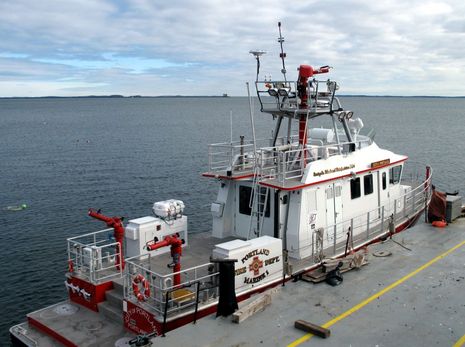 This morning I managed to talk my way onto Portland’s new fire boat, City of Portland (IV), just before it headed home from Rockland Marine, and I was glad I did.  Apparently the firemen themselves got to choose the electronics and they ended up with an interesting mix.  Those are two Garmin GMR HD24 radar domes just forward of, and beneath, that remote-controlled 3,000 gallon-per-minute water cannon.  It’s aimed to starboard like that because when its dedicated 525hp diesel pump fires up, it burps a “large dollop” of salt water before going full stream, and the crew are trying to give the domes a chance.  Given that the canon can purportedly hole a building at close range, the fire fighters must also have a strategy (like rotation stops) to avoid blowing that Furuno satellite compass (upper left) into space…

Another thing you want on a boat with a monster water cannon on top — especially one which is manned 24/7 by rotating crews — is a clear reminder to close the overhead hatch before firing up the pump.  If you click on the photo below, you’ll see it written clearly right above the firefighting station.  Fireman David Crowely, sitting at the main helm in the shot below, explained that they’d chosen Garmin 5212s for similar reasons…because they felt them easiest to use for all the personnel cycling through.  And they’re happy with their choice, except that he was a little bummed that the Furuno satellite compass at the top of the dash had recently stopped communicating with the Garmins (via NMEA 0183, I presume) so he didn’t have good heading and radar overlay when tied up.  That’s a Raymarine 218 VHF and Furuno FA-150 AIS just forward of the electronic controls, and just to its right is a joystick for either of two big dual beam ColorLights.  The boat also had a thermal camera, but it “hasn’t worked out” (brand unnamed) and they’re thinking about switching to a FLIR. 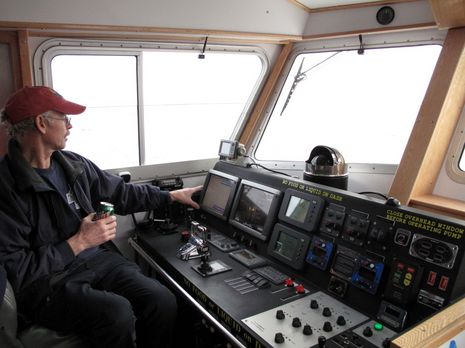 The boat also has seven monitoring cameras — all Raymarine 100’s, I think — going to a multiplexing and recording system just abaft the helm.  And in addition to the helm shown above, there’s a complete backup helm to starboard, plus an open air one above (watch out for the canon!), and a maneuvering station on the aft deck.  There are a lot of wild situations a boat like this can get into, especially given all the tankers that come into Portland, and all the heavily inhabited islands in Casco Bay.  One of the boat’s many notable features is an emergency medical section that’s a duplicate of what EMT’s use in the city’s ambulances.
I’ve put up an album of my photos, and builder A.F. Theriault has some too, as well as PDFs of some articles on the boat.  And I would be remiss not to mention why City of Portland was up in this area:  Despite all the excellent navigation equipment, sometimes mistakes are made (and veteran fire boats are missed.) 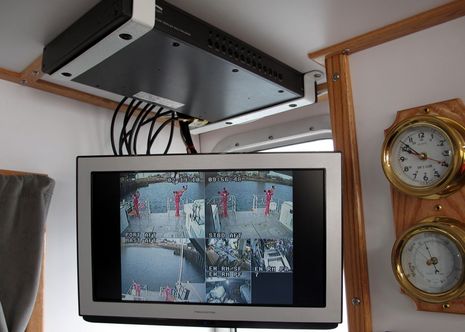