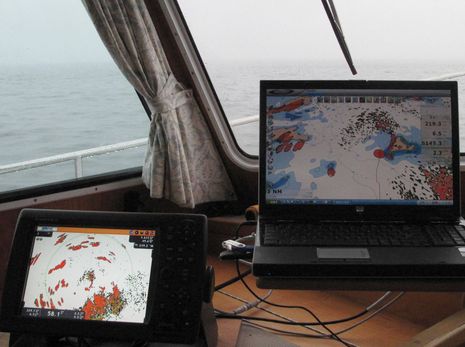 Despite soggy weather I had a fine time wowing a WoodenBoat School navigation class with electronics while we cruised from Camden to Brooklin last Friday. (It was also nice to be reminded about what a neat place I helped to create, what an interesting array of students it attracts, and how nicely my replacement Rich Hilsinger has improved the school while maintaining the good vibes…consider a course, or at least a visit by boat or car.)  And on Saturday I also enjoyed bringing Gizmo home by myself, even though my wife began to worry when a burst of wind and lightning knocked the electricity out in our neighborhood. But when she called, I told her truthfully that I felt quite snug and safe at the pilothouse helm and could easily see where the squalls were thanks the little Furuno DRS2D radar showing both on the NavNet MFD12 and in MaxSea TimeZero, as seen above…

Actually, by the time she called I’d remembered that I could put the NavNet MFD in dual range radar mode, with one window at a half mile or so for navigation and lobster boat avoidance (there weren’t many pleasure boats out 😉 and the other at twelve mile range for squall monitoring. I also had MSTZ overlaying the near range radar returns with a little 3D tilt so I could see chart further ahead without losing detail right around the boat. It’s pretty hard to imagine how I could have had better situational awareness.  It’s also hard to imagine how an experienced mariner could look at all that radar goodness below and then realize that it was all coming from a little 19-inch 2 kW radome without saying something quite emphatic like “HOLY CRAP!”
It truly is phenomenal what some modern radars can do, and, in my view, none is more phenomenal than Furuno’s Ultra HD, even the smallest model. So I was especially interested to read an extensive test of modern radomes published recently by Practical Boat Owner in the U.K. The article is not online, but you can buy a PDF for $11 (search for June, 2011, product tests). Given the huge amount of work a test like this entails, charging for the content is quite understandable. In fact, I’ve long been amazed that European magazines can produce comparative tests as detailed as this, and I used to admire their willingness to pick a winner.
But now that I’m doing my own long term comparative testing, I’ve come to view “best of” judgements about complicated marine electronics as at least subjective, if not downright oblivious to all of a product’s feature details and/or the bigger picture of differing boater needs and abilities. The PBO test piece, written by David Pugh, is first class, but I think it might have been better if they’d avoided a “best of ” choice (even if readers yearn for such simplicity). But, then again, I’m sure Navico is delighted that their new model Broadband 3G radar earned “PBO Best on Test,” and I was impressed to read that it painted a big target at 9.2 miles range 90% of the time, while the original BR24 (which I’m quite fond of for closer ranges) only managed 50% of the time. But PBO’s testing didn’t even mention the ability to discern rain squalls, which of course is a lot harder to test in a limited time frame. (It’s worth noting that the Raymarine RD418HD radome is also very good at imaging rain and we saw it integrate nicely with Garmin’s new GDL 40 cellular NEXRAD service up on Gizmo’s flying bridge last friday; between the two MFD screens you had a pretty good idea about the need for foul weather gear from about a half hour ahead of time right up to the moment the rain drops picked up or slowed down.)
At any rate, the PBO testing corresponds in many respects to my own experience comparing modern radomes over the last two boating seasons. Digital signal processing — which is what the vagaries of HD, UHD, xHD, etc. are all about — has really modified the old wisdoms about the value of high power pulses and narrow beam widths. Pugh does note that most of these small HD domes are now 4 kW, and wonders if 2 kW radomes aren’t under “severe threat”, but he also allows that Furuno’s little DRS2D “seems to punch above its size and power”…which I’d like to second emphatically. Unfortunately I misplaced some comparative long range screen shots and photos I took last Fall (NavNet 3D can still not do screen shots, which is why those Furuno images in the PBO article look somewhat washed out), but I can tell you that Furuno somehow squeezes remarkable range out of its 2 kW, just as it somehow paints pretty sharp close-in detail with its xx beam width. And the DRS2D also offers a lot of radar features like ARPA and true echo tracking that you’d normally only see on ship bridge. However, all that doesn’t mean that a Furuno UHD is necessarily the best radar for you. There are so many more factors beyond features and raw performance, like cost and the other components needed, not to mention the disruption of Navico’s really different Broadband technology. You can learn a lot from the PBO article, but the big decision is yours. Another useful source might be this page of links to my Panbo and magazine radar pieces. 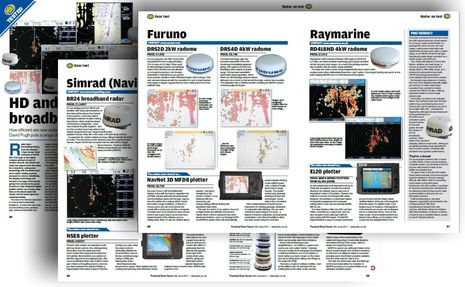