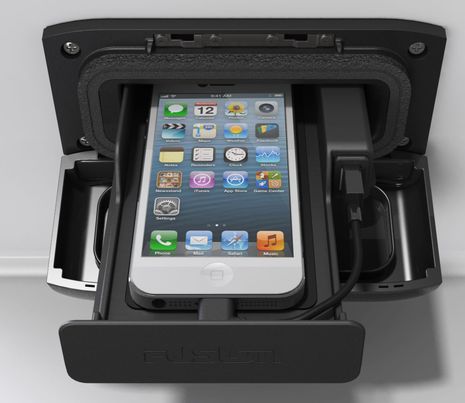 Last week I had a long conference call with the Fusion Marine product management team in New Zealand. I came away even more impressed with how committed the company is to integrating its entertainment products with our boats and mobile A/V sources in every way possible. But I also got a deeper understanding of what a complicated mess their innovative ways has created!  I’ll start with the new MS-Unidock Universal External Dock (above). It solves the problem Apple created by putting a new and entirely different Lightning connector on the iPhone 5 and current iPods — without even telling their accessory developers in advance! — but it also created a new issue for Fusion…

There was no way to fit a Lightning adapter into all the existing Fusion standalone and built-in iPhone/iPod docks so Fusion designed a Unidock that comes with 3 adapter cables such that all iThings and many Android media devices can live safely inside, plus Fusion will be ready should Apple make yet another connector change. (In fact, the Unidock design is very similar to the PolyPlanar MRD80i dock I tested, which presumably was able to adapt to Lightning.)  But here’s the problem: Fusion’s flagship MS-IP700 does not have an external USB port that the Unidock can attach to.

Fusion has come up with two Bluetooth streaming devices so that IP700 owners will soon have a way to use their new iPhones and iPods with the system, but it also rolled out a new MS-IP700i version of the stereo head. The revision even has a grayer, squarer style which harkens back to the 600 Series and which I personally prefer… 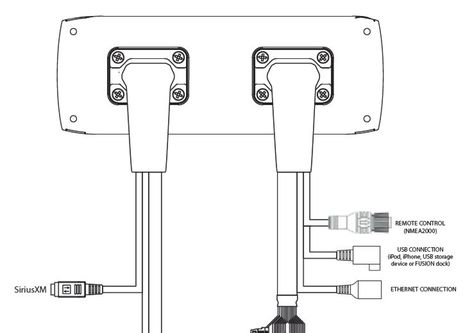 The big change on the IP700i, though, is that USB port hanging off the back in the diagram above. Thus you can drop an adapter cable to your iPhone5, a Unidock, or other choices. But that’s not all that’s different in the diagram. instead of the original 700 Series proprietary DIN N2K connector that Fusion surprised us with (and that I tested here). {Correction 7/7: the new Fusion “NMEA 2000” connector looks like Micro C on the outside but has 7 female pin slots and must be used with either the powered adapter cable that comes with the 700i or a CAB000852 non-powered adapter cable like this one: http://goo.gl/364Se } Which is why a new MS-AV700i and a new MS-NRX200i remote are also rolling out; they all have new Fusion N2K connectors. Fusion seems rather coy when it describes the change as “an improved marine grade FUSION remote control network connector for added reliability and simplicity” but there is a good reason…. 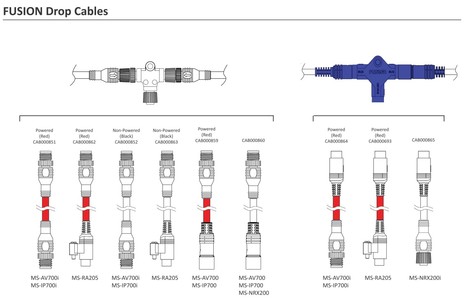 Yike! The future drop cable spread above is what I mean about Fusion complicating its business by trying to make systems that integrate every which way. One reason that they first tried using their own N2K cabling system was so that NXR200 remotes could easily be installed on boats that lacked an existing N2K network. The head unit provided power to the CANbus, and the N2K Conn Kits (cable CAB000860 in the diagram above) that I’m now using to connect IP700 and NXR200 to Gizmo’s network do not have live power wires because you can’t add power to an already powered backbone. The two new 700i head units can still power a backbone for an easy install option, so that’s why you see two possible drop cables that both have standard N2K connectors.
When all is done it will be possible to use any combination of Fusion remotes or 700 heads with a standard network or standalone but that’s why there will be so many drop cable options. Don’t fret; I’ve already seen a well-done document describing all the N2K install configurations and hope it will make the Fusion site soon.

That’s still not all. Fusion recently introduced the MS-RA205, an update of its smaller stereo head that includes a NMEA 2000 port so that it too can connect with NRX remotes and also with the displays that do Fusion-Link via N2K instead of Ethernet (which may cause more confusion). So far that just means certain Garmin models, but I have now experienced Garmin Fusion-Link on Gizmo’s 7212 and it’s excellent. In a future entry I’ll detail that as well as my experience with the currently free Fusion IOS remote app, the beta Android app, maybe Raymarine’s and/or Furuno’s Ethernet Fusion-Link, and finally the BT200 Bluetooth streaming/control device I installed yesterday. There are so many ways even the IP700 can be managed and so many music sources it can use.
Fusion has gone beyond trailblazing, I think, but even if they didn’t make any mistakes themselves picture how many partners they now have to coordinate with. In fact, the IP700 beta software update that made the BT200 work also apparently breaks the Garmin Fusion-Link connection. Doh!  Patience is recommended as Fusion rejiggers its product line, but my enthusiasm has not waned.