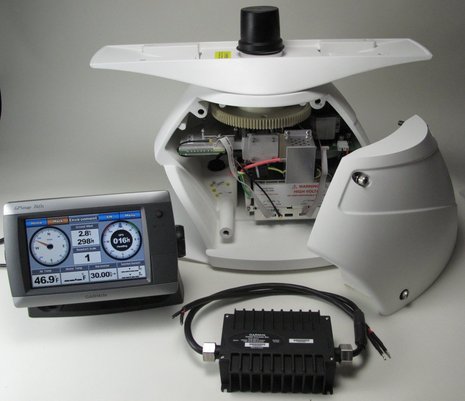 Garmin may have lost its bid for Raymarine last week, but, as noted, there’s plenty of evidence that it’s building a daunting marine electronics line on its own.  Check out the little  GPSMap
740s and the big GMR 604 xHD (pedestal) above for examples of growth in both directions.  It’s hard to imagine getting much more MFD into a casing less than 9 x 6 inches and under 2.5 pounds.  Meanwhile, all that cast aluminum in the radar base contributes to a heft of 46 pounds, not including the 12 pound array.  Which is actually 4′ 3.5″ wide, but still fit on Gizmo’s antenna mast…just.  Yup, both are now installed on the boat, along with a Garmin 5212 and a skeleton N2K sensor network.  My dash board projects are not quite ready to show off, but the testing season has begun…

Let me say right off that the 740 is fabulously fast, which is a bit of a surprise given that it’s positioned as an “affordable” alternative to Garmin’s fully networked touchscreen MFDs.  And that’s particularly good news as the smaller a screen is, the more an operator is apt to zoom and pan around it.  The 740 is also full of interface features that will make some 4- and 5000 series owners jealous (at least until they show up in a software update for those machines).  For instance, there’s a new, and much more powerful, routine for setting up data overlays on the various chart screens, and also “combination” screens.  As shown in the shots below (which are now easy to make), this particular design is #8 in a series of choices which can also include route navigation data if you’re using one (I wasn’t).  Any of the 9 data designs (including “none”) can be assigned to any screen type, and most of the data fields on each design can be changed globally if you want.  In other words, there’s a pretty simple way to get the data you want, but you can also tweak pretty deeply if that’s your style.  (You can read more about this feature on page 51 of the very complete manual, downloadable here, which is also nice surprise.)  At any rate, while I’ve just started to get familiar with the test unit, I already suspect that the 700 Series hits the sweet spot I thought it might. 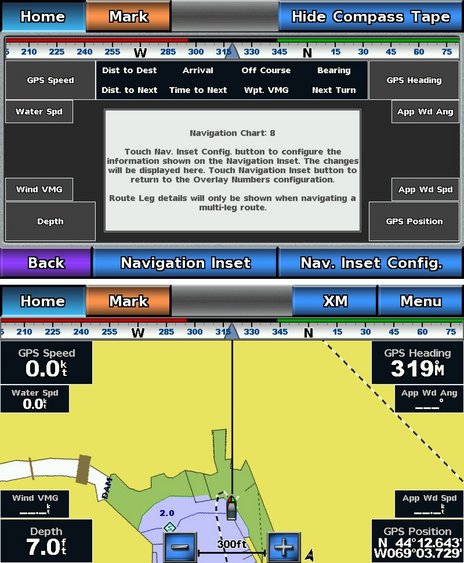 In fact, I wouldn’t be surprised to see some bigger boats using a 700 as an adjunct to a bigger system. The various engine, wind, etc. screens (best seen here) means it can function like a super size GMI 10.  And I’ve seen already that it networks well via N2K, sharing the GXM 51 satellite weather/audio receiver and other sensors nicely with the 5212, and even updating itself when I applied the newly simplified Marine Network card update system to the bigger MFD (though it’s not listed).  Heck, we even switched the Ethernet plug from the big radar to the little 740 and it all worked fine, though the latter’s little screen didn’t seem to have enough pixels to show all the empty Outer Harbor mooring buoys seen below (sorry for the poor focus).  I’ve had even less time with the 604 xHD, but so far, so good.  I don’t know if it was blind luck, or clever programming, that let me pick the one moving boat amongst all those targets on first touch, but I do know that the Marpa calculations on this and a few other targets seem to be spot on.  It will be interesting to see the full color version of this radar imagery on a GPSMap 7212 that I hope to try eventually (and compare it to last summer’s experience in the same areas with other radars).  The on-the-water testing season has begun (though I still have lots of install projects yet to go). 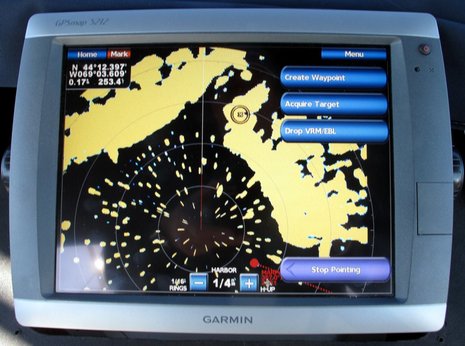