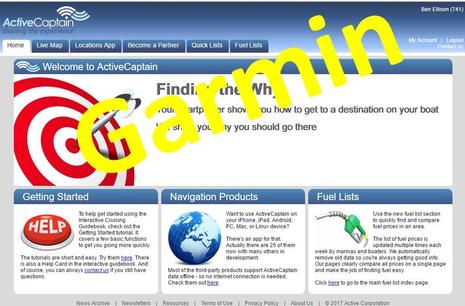 This morning Garmin purchased ActiveCaptain and I have no idea if that will turn out to be good news or otherwise. Will this large and growing database of crowdsourced cruising information change now that it belongs to a major electronics brand? I have no bold opinions but I do have lots of questions I hope to discuss…

For instance, will access to all the ActiveCaptain cruising data remain forever free as promised by the founders but now former owners Karen and Jeffrey Siegel? The Garmin press release doesn’t touch on this subject, but this sort of release tends to be dry.

Will AC’s partner companies like Furuno, C-Map, Rose Point Navigatiion, MaxSea, and many others also retain free access to the database so that those of us who create, update, and use the info can access it on all sort of screens? Clearly, one of the reasons that ActiveCaptain gained so much traction since its 2007 inception was it widespread availabilty wherever you wanted it, and detente among competitors is something of a hopeful modern trend — like Google Maps on iPhones or the fact that (Garmin’s) Fusion audio remains compatible with all major marine electronics brands.

But then again, (sibling of C-Map) Navico and Garmin are still fighting hard about sonar patents and Garmin foiled Navionics attempt to make SonarCharts available to its MFD users. In that discussion I wondered if crowdsourced sonar data should be somehow apart from commerce, and now I’m wondering if ActiveCaptain contributors will feel miffed that their work could become exclusive? Or is the resource actually safer in the hands of a large corporation than in a tiny two-person company?

Bigger picture: Is it fantasy to hope that crowdsourced data could be solicited and organized by a non-profit organization with forever guaranteed access to all users, commercial included?

Then again, does Jeff Siegel’s press release quote — “Garmin has extensive engineering and cartography capabilities that will allow ActiveCaptain to be deeply integrated into their product offerings” — bode great things to come? Jeff, I will add, was just termed “the speaker who caused the most stir” at what sounds like an interesting NOAA meeting on the future of charts.

I will ask Garmin if they can be any more specific about future access to AC data, but that may be well be undecided. In the meantime, does this sound like good or bad news to you?