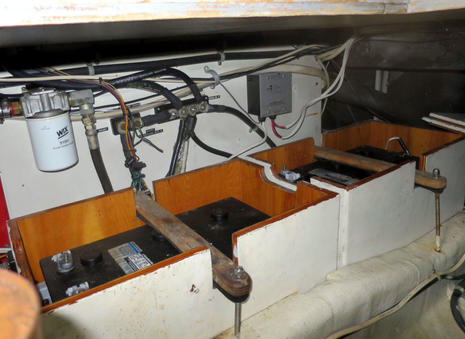 The time has come. Actually, it was a specific day late last October when I Torqeedoed out to Gizmo only to find a dead ship. Not even a modest LED light nor the panel voltmeter would power up, and this dual Deka 8D house bank measured 5 volts at the studs. While I later figured out that only one had suffered a catastrophic malfunction, I’d already sensed that these AGM batteries were on borrowed time. They’d been on the boat at least a season when she became mine in early 2009, and at least occasionally mistreated since. But the real issue is what to do next…

A favorite homily these days goes, “Old age is a high price to pay for maturity,” and in fact my understanding of boat power may have increased at roughly the same rate that my ability to remove those damn 158-pound dead batteries declined. Then again, current battery technologies are wickedly complex if you dig down, solid real world comparison testing is scarce as hen’s teeth (for several good reasons), and the factors involved in a specific boat/boater choice are many.

I remember how much Panbo readers helped me when I was house-battery young and naive in 2010. (The 70’s liveaboard years don’t really count, and even seem quaint in terms of amp hour capacities, SOC, expected cycles, and so forth.) So the goal of this entry is to lay out my perceived options for discussion. I know I’m not the only cruiser scratching a chin or two about battery replacement, and a bonus is that now I know some guys who have genuine expertise on the subject.

Go with the tried and true? 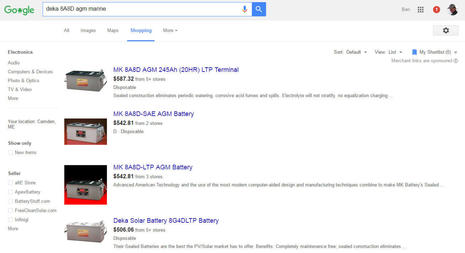 For instance, it only cost me a Reuben sandwich and a Bloody Mary to talk this over with my “power guy”, Alden Cole, who’s still very much in the business — now at Lyman-Morse Wayfarer — and who has reached a point where he can discuss boat battery varietals and individual brand bouquets like fine wines. Heck, he once explained to me that it’s good practice when putting together a bank to use batteries with sequential serial numbers (they aren’t popped out like widgets, after all, and a close match helps with a long, balanced life). Alden likes the East Penn Manufacturing 8A8D AGM’s that Gizmo came with — which are sold under Deka, MK and other brand names — and it certainly could be prudent and easy to simply replace them.

I can’t fault the Dekas’ service life and I got used to what their total (original estimate) 490 amp hours could do, even after upping their role by replacing an extra noisy generator with solar panels (which, I realize better now, probably helped a lot with their health). But I surely like a boat fix project that includes some improvement, though then again, batteries aren’t just batteries. They’re part of a system and much of a change can also mean changing alternator, regulator, main fuse and/or the safe containment scheme, maybe more. Yes, I may have become a tad obsessed, though Alden didn’t flinch; he grinned. 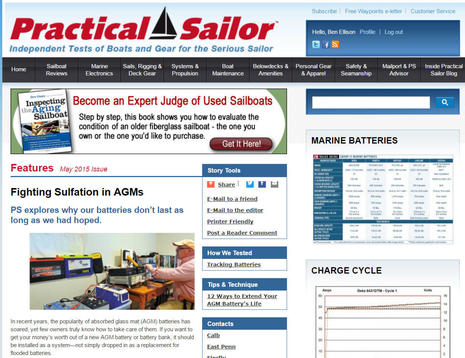 I haven’t put my battery quest to RC (Rod) Collins — the proprietor of MarineHowTo.com who once wowed readers here with his Smartgauge battery monitor analysis — but I did figure out that he’d recently designed an even more elaborate testing challenge, this time focused on the way many of us actually use AGM house banks and published in Practical Sailor. I even purchased an annual subscription to read the three part (so far) series, and highly recommend it (not easy for a curmudgeon who finds some PS practices, like the lack of bylines, annoying).

If you sometimes run your engine to charge your house bank, you probably don’t want to do it often or for long (me too). What RC has painstakingly proven is that if you drive AGM batteries to a 50% depth of discharge and then charge them in a typical way for an hour — generally the “sweet spot” when they’re accepting a high amperage bulk charge — they will lose some capacity every time you do it and even when you top them up, they still won’t hold as much juice. The apparent cause is sulfation, and avoidance of partial state of charge (PSOC) cycling is just one facet of treating batteries well (PS and RC shared tips here). Incidentally, RC neatly terms the 50% capacity we shouldn’t use “dead lead” and there’s lots more to his work, like which AGM brands tested best. But I keep wondering if there is a better battery technology that would make sense for Gizmo?

While I know that Nigel Calder is keen on advancing the energy/hassle to boat-juice-banked ratio, he’s a hard guy to pin down and a hurried conversation in a hallway at METS only yielded a “carbon foam batteries?” scribble-to-self. That, however, may turn out key to this quest, though I’m getting ahead of the story. 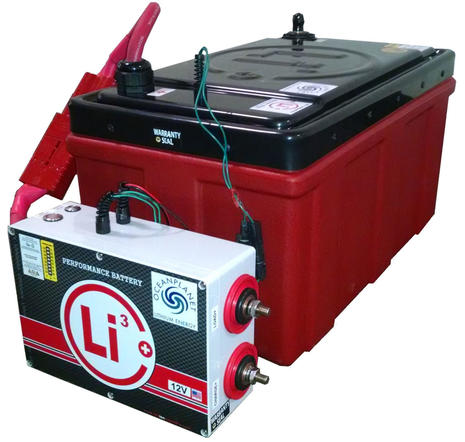 I’ve known Bruce Schwab since before Bruce Schwab Energy Systems. Yes, now he sells high-tech boat batteries and much more, but that’s not a bad thing. Consider the system awareness a couple of solo circumnavigations has got to instill and, besides, Bruce is probably going to take your call, too. At any rate, he’s pitching me two interesting products and we’re not done. The Lithionics OPE-Li3 Lithium system he helped develop seems state of the art, and I was already impressed with how well Mastervolt’s system held up to extreme demands. But does lithium make sense given Gizmo’s use case, and mine? Yanking the generator did improve performance, but weight isn’t that critical. And while needed capacity is an entirely different calculation when there’s no dead lead with very fast charging possible, the smallest 110Ah OPE-Li3 — the size range is amazing, pricing PDF here — retails for about $1,680!

There is a rational method of calculating true battery cost by factoring in expected cycle life, which is discussed more in the Mastervolt entry, but that too has a personal dimension, like if you’re a boat guy looking at 70. I’m looking forward to learning more about Li3 and its NeverDie management system (BMS) in Bruce’s booth at the Portland Boatbuilders Show this weekend, but…

Firefly carbon foam AGM, may be the one

The real draw is the Firefly carbon foam AGM batteries which Bruce distributes nationally. It turns out that this is the technology that has at least tentatively excited Nigel (PDF here). The Firefly is also the only battery that came back to full capacity after RC’s grueling test regime (though he too awaits more real world user experience). Plus, I didn’t turn tail after a deep dive into Firefly Energy presentations and, hey, they’re made in Peoria.

The Firefly is only available in Group 31 size, and two will not fit in a Gizmo battery box, but neither is box modification or replacement a major task (he said), and never having to move an 8D again is an improvement. Four Fireflys totaling about 440Ah purportedly far more resilient to sweet spot charging with far less dead lead should be an improvement I enjoy on a regular basis. And in this case the $/kWh calculation over battery lifetime might justify the higher initial cost. “All a tentative rationale” you say? Please go on.

Finally, consider the snappy Firefly installation below as perhaps another positive data point. There’s actually 8 batteries total, 4x parallel 2x serial to drive that 48v Thoosa electric propulsion and also step down to house loads. My notion: whoever put this together — Bruce only supplied the Fireflys, though he certainly offers system design — thought long and hard about battery selection. Do I need “real” counseling? Obviously, more to come. 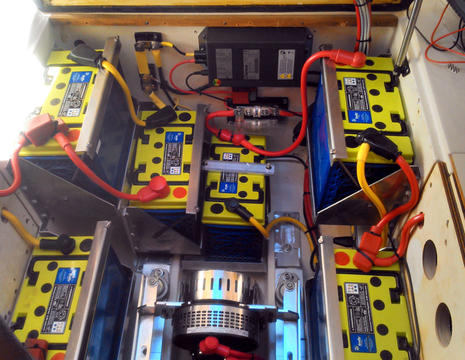