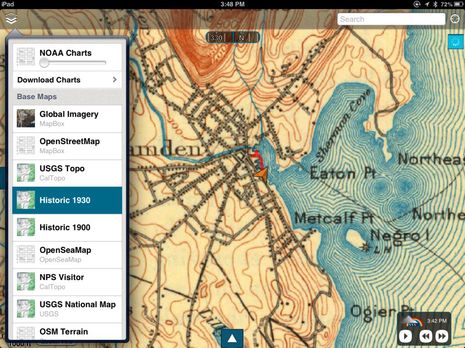 I was testing the new marine navigation app Skipper when I realized that historical topos were among the many “base maps” it can display, along with regular NOAA raster charts. Skipper has some interesting features (to be covered soon), but I’ve been waiting a long time for this historical angle. Haven’t marine electronics and software become so powerful that they can help us with more than just the “work” of operating a boat? As in my hopeful 2005 comment that, “One day PC/plotter memory will be so abundant that historical charts will be included in navigation packages just for the fun of it!” Of course, I didn’t realize then that tablet computers with wireless broadband Internet connections would come along, and aren’t they dandy for accessing the ever growing cloud of cartography?

While it’s true that Skipper’s historical topo maps could be higher resolution and also better geo-registered (I was at Gizmo’s float when I  took the screenshot above, not on shore), but isn’t it interesting that Curtis Island was once called Negro Island (and worse)?  Heck, I once wrote a magazine feature about how apt cruising is for enjoying history and even included a sidebar about finding antique maps online (PDF of Hudson River Melting Pot here). Skipper, incidentally, is getting its historical topos from the interesting site CalTopo (explanatory blog here), but unfortunately the online CalTopo collection only includes a small fraction of what you can find in the UNH Library New England & New York Collection, not to mention the huge (though hard to search) USGS collection. 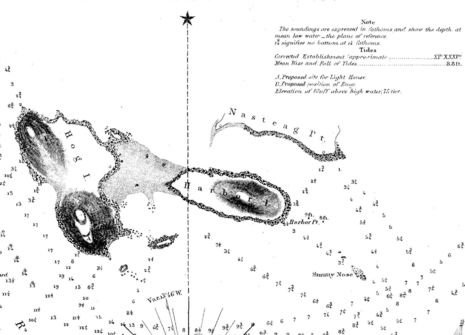 But wouldn’t it be neat if Skipper or some other app included easy access to NOAA’s Historical Map & Chart Collection, now at over 35,000 scans? I found this site even easier to use, yet much richer in content than during my last visit. I got a kick, for instance, out of the 1854 “Reconnaissance of Eastern Part of Eggemoggin Reach, Maine” clipped above. It’s not a chart per se, but rather a worksheet used to make charts and also contemplate a possible lighthouse (that wasn’t built). You can easily picture the hydrography team rowing careful courses and taking soundings, while other crews climbed those sharp island peaks to do their “Triangulation” and “Astronomical observations”… 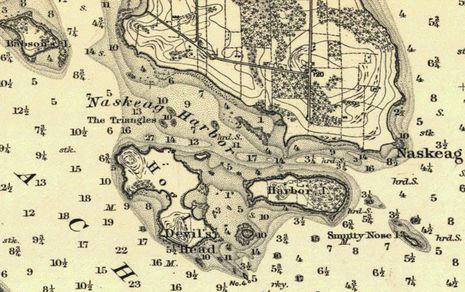 Now look at how well this area was charted by 1885 (click on image to see at the full resolution NOAA offers). I drove Gizmo through somewhat tricky Naskeag Harbor in July and could probably have used this chart (though the use of fathoms for deep water soundings and feet for the shaded shallow areas is a little confusing). Notice how much more topography and vegetation detail there is than in modern charts. How did cartographers pull this off before GPS and aerial photography, let alone before high resolution satellite photo maps?

I’ve rhapsodized about old time cartography skills before, but maybe someone knows of a book or other source that explains in detail how these charts were made (besides for the excellent overview in Nigel Calder’s How to Read a Nautical Chart

)? And I’m pleased to report that the developer of Skipper likes the idea of offering historical charts, too, though I suspect it might first take an enthusiastic intermediary like CalTopo to aggregate NOAA’s collection into large area layers. There’s so much catographic activity online that I’m hopeful, and I further hope that the historical charts aren’t cropped, so we’ll still be able to check out details like those shown above. 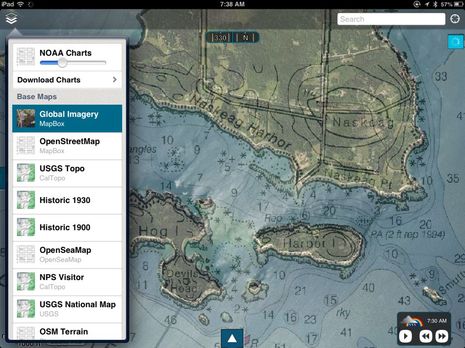 In the meantime, I’ll note that the Skipper app,which is a sibling of  the Gaia GPS mapping apps, offers all sorts of base maps and they can all be downloaded for use when you’re not online. Plus, you can overlay any base map with the NOAA chart at whatever transparency you want, as I’ve done with the Global Imagery sat photo map. It’s not as effective as Nobeltec TimeZero’s Photo Fusion, but then again Skipper’s $12/year subscription is a smaller investment. There’s also an Android Skipper on the way, and you can test drive the current iOS version for a dollar.
Finally, in the fascinating historical cartography category, do you know about the Library of Congress Panoramic Map Collection? If you’ve ever spent time in Wiscasset, Maine, you’ll know that many buildings are still recognizable from the remarkably detailed view seen in part below. Apparently, panoramics like this were once quite a craze in a Chamber of Commerce sort of way, and teams of crack cartographers went from town to town creating them. Again, I’d love to know more detail about how the heck they did it, and wouldn’t it be neat if you could easily access these public domain images as you cruised the coast? 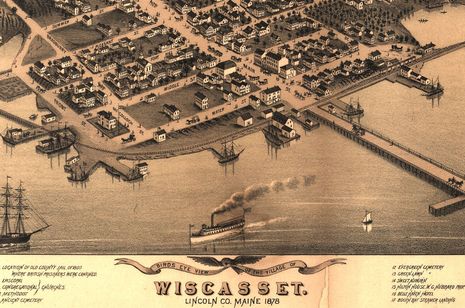