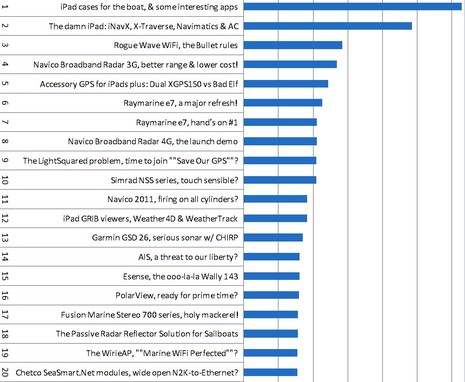 Looking back at Panbo statistics for 2011, the iPad was undeniably a major topic. The February entry “iPad cases for the boat, & some interesting apps” was the most read of the year, by far, and the next up was the “The damn iPad: iNavX, X-Traverse, Navimatics & AC” entry written back in May, 2010 (when I was lusting for one). In addition, March’s “Accessory GPS for iPads…” came in at #5, and May’s “iPad GRIB viewers…” at 12. So should Panbo become iPanbo? Well, certainly a major goal here is to report on and discuss important trends in marine electronics, but understanding statistics like these involves a lot of nuance…

Occasionally, for instance, a Panbo entry “goes viral” when larger sites link to it and prompt a big spike in visitors. But the detailed stats for those two highly-visited iPad entries don’t reveal major referrals, just a steady stream of folks searching for information on how to use iPads on boats. I’m going to guess that apps and pads were big subjects at all the tech sites, and will continue to be so, and I know that there will be lots more for me to cover in 2012, particularly the connection between mobile apps and dedicated marine electronics. (Note, for instance, the interest already shown in the Raymarine e7 and the Chetco N2K-to-WiFi bridges.)
Speaking of WiFi, isn’t it interesting that “Rogue Wave WiFi, the Bullet rules” — an entry written back in October, 2010 — was the third most read piece on Panbo last year? I attribute that to how much cruisers want to be connected, how frustrating long distance WiFi can be, and also how much useful information commenters contributed to that thread. Also helping is a link to the entry on Wave WiFi’s home page, which I consider a positive sign of how manufacturers have adopted to the wild and wooly web; after all, some of those comments are not only critical of the Rogue’s pricing but explain how similar results can be had cut rate.
Also noticeable in the top twenty is a strong continuing interest in Navico Broadband Radar, which is not really surprising given how unusual the technology remains. I also notice technologies that no longer make the most-read list, like AIS. While it is still the most popular search category in Panbo’s archives, I think a lot of readers understand it pretty well now, and the aspect that gets more attention is a spirited argument about AIS privacy concerns (or misunderstandings ;-). The story is similar with NMEA 2000; it’s better understood now and comes up in all sorts of other marine discussions, but it’s not the stand alone topic it once was.
I may be making too much of the list; a lot of diverse entries got nearly as much attention on Panbo last year as the ones seen toward the bottom of the list. But it is a good excuse to publish this “lookin back” picture Dan Corcoran took last summer. And also to ask you all what you think the big marine electronics stories of 2012 might be? 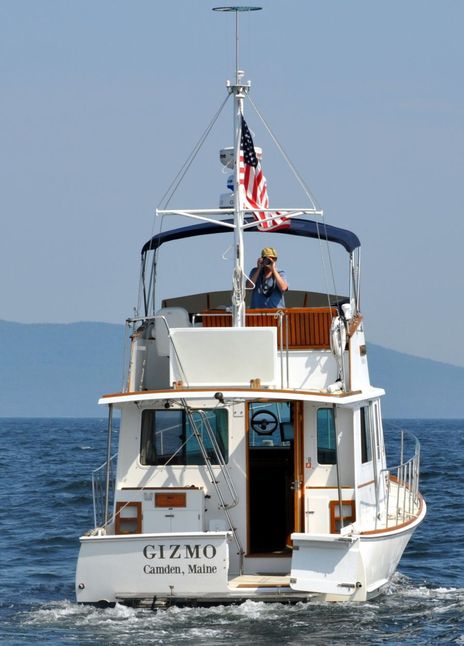