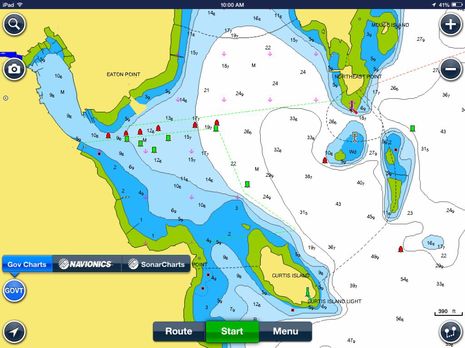 This is a significant surprise. Version 7.0 of the free Navionics Boating app released today for iPad and iPhone includes the ability to download and use NOAA vector charts, as seen above. Meanwhile, if you already own a Navionics Marine app for iOS, there’s a 7.0 update available which adds “Gov Charts” and the same feature will soon come to Android versions of both the Boating and Marine apps. Navigators who already use Navionics charts on a tablet or phone may find it useful to have NOAA data for comparison, but the big news is that any U.S. boater can now enjoy a Navionics level charting app completely free… 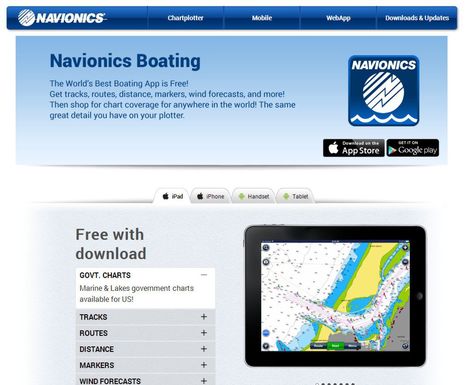 Before getting further into what Navionics is up to, you too may want to know what the difference is between Navionics Boating and Marine apps. The short answer is, “Not much!” I just downloaded Navionics Boating to my iPad mini this morning, and it’s virtually indistinguishable from the Navionics US HD app that was already there. If you download the Boating app and then buy the Navionics US charts for $50, they would be exactly the same. In other words, the Boating app means that Navionics is moving from selling eight apps with a specific chart region included to selling chart regions within a single app. The Navionics Boating page explains this fairly well, and owners of a Marine app bought since 2010 will appreciate the “will continue to receive updates and support” promise. 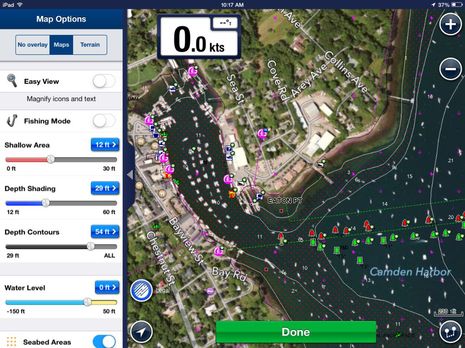 So here’s my Marine US HD app now upgraded to 7.0 so I can view NOAA data if I want. While it’s not surprising that the Navionics charts have a lot more features available — like satellite photo overlay, Community Edits, excellent tide forecasting, and more — a little further down I’ll illustrate some of the many Boating app features that come free. 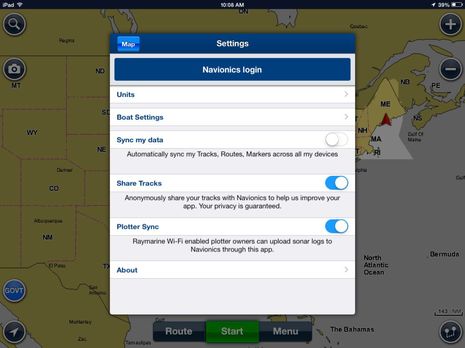 First, I want to note that both 7.0 apps include a newly revised Plotter Sync feature that I’m quite excited about, and that may also explain why Navionics is now giving away a perfectly usable charting app. As explained at the Miami Boat Show, Raymarine and Navionics are stepping up their app/MFD integration with a sync (feature temporarily removed), but will also use the app and mobile device as a way station between Navionics servers and Ray MFDs. Fresh charts and Community Edits will go to the boat and if you’re willing, automatically collected soundings will go to Navionics. In other words, boaters using free Navionics Boating will conceivably help collect data that might eventually induce themselves and others to purchase Navionics charts and the added Freshest Data option that includes SonarCharts. It’s a clever scheme indeed, and the demos I saw suggested that what sounds like a complex synchronization will be super simple for the user. 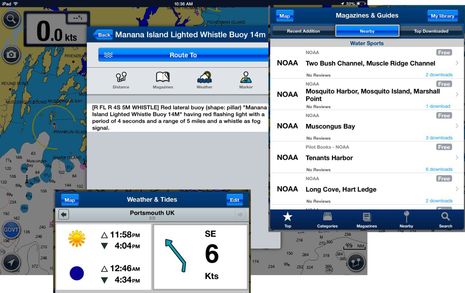 Here are some Navionics Boating app features that work even with free NOAA charts. Data like nav aid specifications is easy to access and read, the “Magazine & Guides” library includes NOAA Pilot information, and at least wind and Sun/Moon data is available worldwide. I also think that basic route making works pretty well, though I’ve become fond of the $5 Advanced Routing module that came out a while back. No company has been working on charting apps longer than Navionics and it shows, even in the free version.

So, why was I looking up the weather in Portsmouth, England? I’m pleased to report that I’ll be visiting the Raymarine R&D center there next week. You can see in the screens below that even when using the free “Govt” charts in Navionics Boating, there’s still a somewhat useful base map available elsewhere. When I tried switching to Navionics charts, I was, of course, offered the opportunity to buy them, but could also get at Menu/Map Options to turn on the photo overlay. I’ve only messed with the new 7.0 app briefly; what goodies or issues can you find? 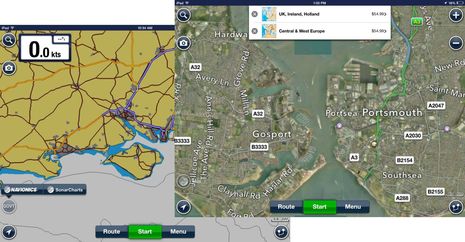 PS 5/31: Sonar log uploading is working for me, and it’s easy as pie. When I got onto the a77’s WiFi yesterday and opened Navionics Marine US HD, I was greeted with the message below. The app even walked me through where to find the button to enable sonar logging on the Ray MFD (running LightHouse II v10.34). When I did the same thing today, the app uploaded and processed the sonar logs it saw on the a77 to my iPad mini and when I got home it sent them off to Navionics with the promise that the resulting SonarCharts will be available in about a week. Apparently the sonar logs are automatically saved to the whatever card is in the MFD and can also be uploaded to Navionics via the Chart Installer you can download from their site. So you don’t need the app to contribute sonar data. But you do need either a Navionics+ card or the Freshest Data app option to see SonarCharts. 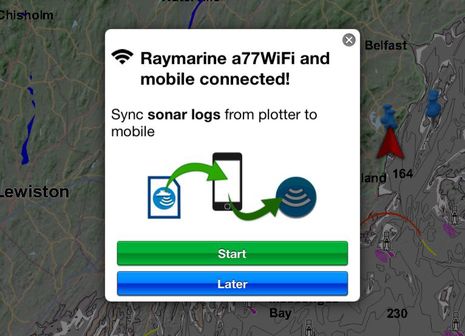