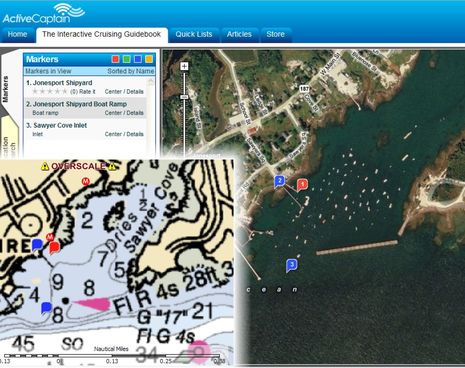 Jeffrey Siegel caused a minor ruckus when he titled an iphonesailing.net thread about ActiveCaptain “There’s no reason to buy another guide book…”  I’m a huge fan of AC, and I’ve watched Jeff’s bold predictions come true one after another, but in this case I’d like to think he was just trying to provoke a constructive argument.  I don’t think AC or any other source of cruising info will ever do a complete job, and my goal is have as many sources as possible on tap.  The snug little harbor I sit in right now is an excellent example…

First of all, compare the inset of the NOAA chart above — as seen in Coastal Explorer 2010 beta with AC, Maptech, and other guide overlays — against the Microsoft satellite image seen on the AC web site (which, cool beans, I can now link to directly).  NOAA doesn’t even show the huge steel and concrete breakwater that was built here in the 80’s!  Meanwhile, AC only shows rudimentary data about the facilities here, and it’s misplaced.  The Maptech data is somewhat better, though older in my case, and less likely for many cruisers to have since Maptech Navigation and Coastal Explorer stopped being partners.
The best coverage of this harbor can be found in the Cruising Guide to the Maine Coast, a dog eared copy of which is probably aboard every cruising boat that gets this far Downeast.  But, darn it, that beautifully designed and thoroughly researched guide doesn’t do Sawyer Cove justice either.  Specifically, it understates the Jonesport Shipyard, which has four transient moorings, neat-as-a-pin showers and laundry, repair expertise, and a friendly attitude.  It may be tiny in terms of “marina” but given that there’s no other marina for at least 30 miles in either direction, this is information every passing boat should have.  It’s great that I can update ActiveCaptain about this stuff, but many cruisers won’t be aware of what a respite the Shipyard offers until the major print guide makes a point of it.
That’s because printed guides are still often the most thorough and easy to use sources.  I could give hundreds of examples where that Maine Coast Guide, now in its fifth edition, is more useful than AC or anything else I have, digital or paper.  Another good example is the new Great Loop guide just announced by Managing the Waterway.  The Doyles have already published some really well designed guides, but check out their latest ideas on how to organize all the info they’ve collected.  Sure it would be great to have it on, say, an iPad — with automatic updating — but it’s really hard to imagine how a mostly-user-generated source like AC could put together data like this.  I think the well equipped cruiser has all available sources in all available mediums. 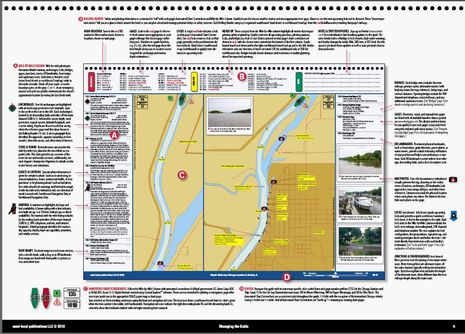