Raymarine recently announced three new multifunction displays, extending the multitouch aSeries to 9- and 12-inch screen sizes, and the glass bridge gS Series to 19 inches (the proportions of my collage are approximate). Given four additional a9 and a12 models with digital sounder or Chirp DownVision built in and the fact that all these new MFDs can network with all the aSeries, cSeries (non touch), eSeries (hybrid touch), and gS models already available, is any other manufacturer offering so much choice? They all run the same software — now up to Lighthouse II, release 10 — so you may already be familiar with most of the features, but the new MFDs do have a few new hardware highlights, some of which I got to see in action aboard Raymarine’s remarkable testing vessel… 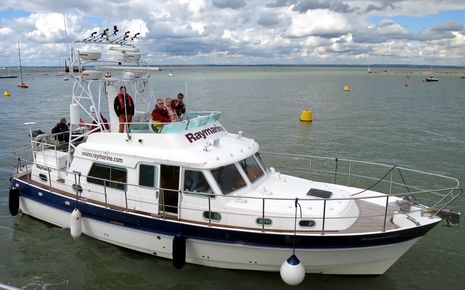 Raymariner is a highly customized Hardy 42. The abundance of wind sensors, radar scanners, and GPS mushrooms visible in this photo only hint at what’s inside. In this scene some of the 20 boating writers invited to England last week are being put on a dock in Cowes so they could try other demo boats while a few of us rode Raymariner back to her home dock on the River Hamble. Sitting middle seat above is my colleague Chris Landry, who’s already written an informative Trade Only piece on Raymariner. 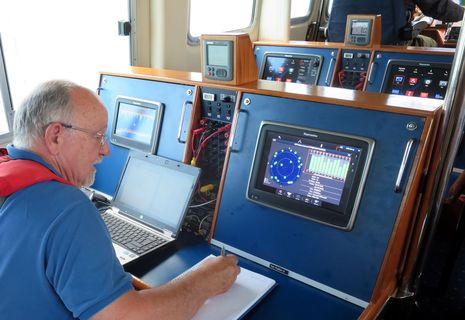 The next day I enjoyed more time on the Solent aboard Raymariner, when she was back to work. Here you can see four of the eight main testing stations, each with a big removable panel which can be set up with displays back at the R&D center in Fareham. I forgot to ask but presume that on some days you’d see competitor products getting reviewed here. But on this day I found Tony Jesshope — a once-retired Motorola engineer and never-to-retire local sailor — doing some final checks on the new “10Hz Fast Acquisition GPS with GLONASS, WAAS / EGNOS /MSAS” built into the a12 (and a9). Note the extensive patch panel, which meant in this case that Tony could easily unplug the optional external GPS antenna… 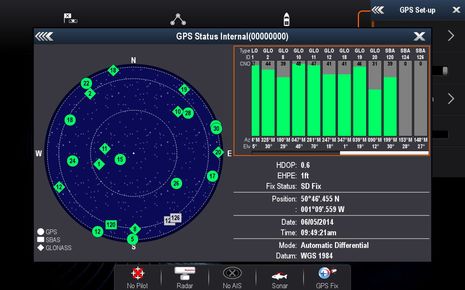 The performance I saw was stunning. With the exterior antenna attached, the a12 got a fix very quickly and was soon using 22 satellites — note that the signal strength bar chart scrolls — with an EHPE (estimated horizontal position error, or 50% confidence circle) of one foot! Jesshope showed me how the a12 recovered gracefully from an antenna “failure” though this status screen showed a performance drop, and even more of one when he put his hands over the internal antenna that runs along the display’s top edge (though it was still delivering a valid fix). He also showed me how a LightHouse II diagnostic screen can indicate which GPS antenna is in use. I’ve already noticed great improvements in Ray diagnostics, particularly regarding third party NMEA 2000 devices, and this was more evidence. 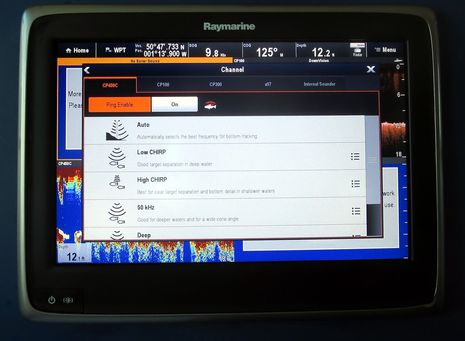 I’d seen the multi sonar module support that arrived with LightHouse R10 on one of the demo boats (and yesterday on Gizmo), but I doubt that anyone will ever stress the feature to this extent. What’s happening here is that we’ve set up a new favorites page with four sonar windows and now we’re being asked which “sonar channel” we’d like to see in each one. I can’t count the possibilities because this particular a12 has an internal sonar module and it’s networked to an a97 with built-in dual frequency sonar plus one each of Ray’s three black box fishfinders, all of which offer multiple modes and may even have more than one transducer attached. Note the informative text and graphics describing what the attached CP450 is capable of, and also the ability to turn pinging off if you run into an interference issue (which seemed quite possible in this case ;-). The bottom line is that fisherman or other sonar fiends can have nearly infinite sensors and can set up favorites pages that display the channels they want for a particular purpose, apparently with all settings saved.

The bigger picture is that Raymariner — there’s also FLIRtacious in California, and many volunteer test vessels — is a terriffic tool for testing the bejesus out of marine electronics. I can’t talk specifics about the LightHouse R11 update that was also being stressed out last Thursday, but it does involve radar display synchronization and the tester was making the driver do high-speed maneuvers that most of us will never try. Helping R&D wring out new features and software is one thing, but Tony also showed me an elaborate test protocol on his laptop that gets applied in real world conditions to every model every time anything changes. 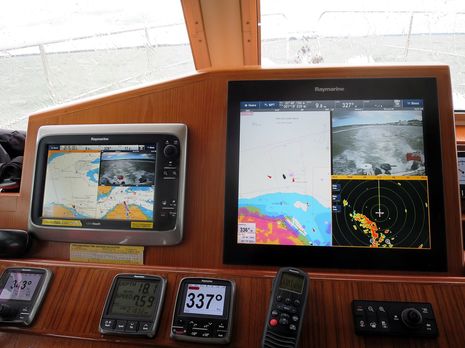 Raymariner also had a new gS195 mounted next to the real lower helm station. It’s very fast and you can see its vast screen area compared to the captain’s e12 (which is sporting an extra wide bezel refit kit). Note the RMK-9 keypad; it’s still primarily marketed as a gS Series accessory but in fact it can also extend hybrid touch to an aSeries (as can the Remote app on a smartphone, sort of). The small hardware change in the gS195 is the addition of an HD-SDI video input port. I’d never heard of the protocol myself but was told it’s “future proofing” and also notice that Raymarine is now offering even FLIR’s top end marine camera systems. Meanwhile, another feature of the new a9 and a12 models is support for analog as well as IP video — perhaps because making IP boat cameras is harder than anticipated? — and also the inclusion of a SeaTalkNG to DeviceNet adaptor cable with every unit (see “in the box” here). Many of us have known for a long time that STng and N2K work together fine, but having Raymarine declare that in such a material way is a good thing. 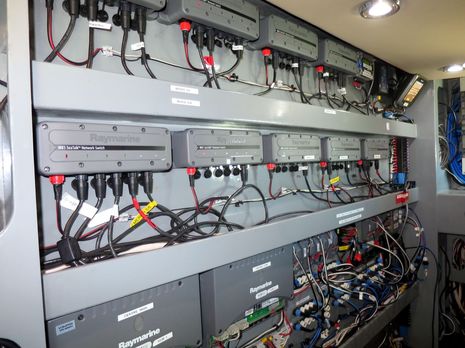 Of course I was also fascinated by the technology behind a test vessel that can support so much equipment. Here’s a view of the networking wall in an aft utility cabin. Note how much updating must have happened when the relatively new RayNet Ethernet connector and HS5 switches came out (discussed here on Panbo). Also tucked away somewhere is a massive battery bank and various heavy duty inverters and DC voltage converters. And besides “four rows” of fixed sonar transducers, Raymariner also has two “moon pools” like the one below. Those three Airmar CHIRP transducers were installed in a blank fiberglass form that was then swapped with the one already bolted into the boat’s starboard casing, no haul out required. Does anyone know of such a well-equiped marine electronics test vessel? 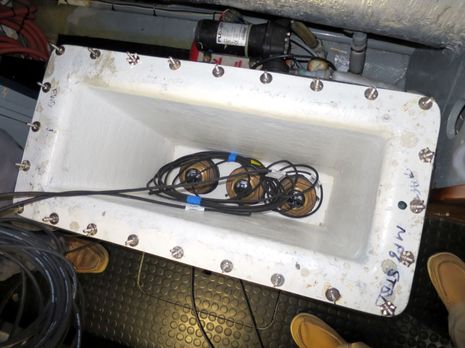 But an able test vessel doesn’t mean much if the manufacturer involved doesn’t also have solid R&D and manufacturing processes in place, which I believe Raymarine does. I think it’s quite visible in the current product lines and quarterly LightHouse updates, and I saw more detail of how it works in England, which I will write about soon. The story also has a people aspect, suggested in part by the photo below. First note the forest of masts in the background; this southern coast section of the big island has a huge recreational boat population, as well as a huge maritime history (as I saw a bit of on HMS Medusa). Now consider the seasoned engineer and mariner who drove Raymariner for the demo day. I didn’t get to talk with Derek Gilbert much, but I know he currently manages Raymarine’s global customer support department (U.S. excepted) and has worked for the company since 1986. That means he was part of the Autohelm team that Raytheon acquired in 1990 to backbone its recreational marine division, was there for the leveraged buy-out that created “Raymarine”, etc. etc…timeline here. We tend to think of Raymarine as a company that’s been through a lot of changes, even hard knocks, in the last decade, and it has; but there’s also a salty core of expertise that been there all along and now with some guidance from FLIR seems to be maximizing its potential. 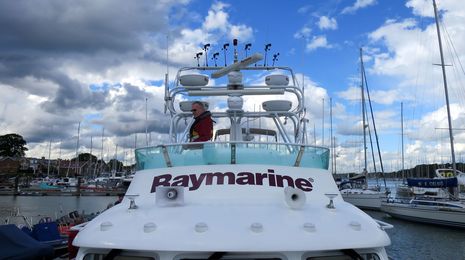