Onboard R/V Falkor, the Google “See Inside” way 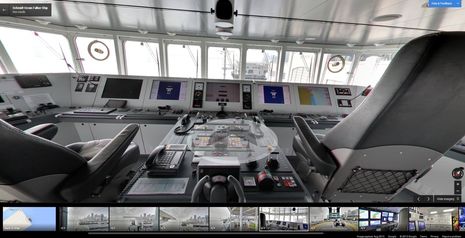 I was blown away, partially due to the timing. Just after writing about how apps can make fascinating historical cartography easily accessible, I learned about a fascinating advance in 21st century mapping. I’d guess that most every Panbo reader has marveled at the seamless panoramic photography found in Google Street Maps; well, now it’s possible to use very similar technology to tour inside a ship, and the vessel Google chose for the first demonstration is a corker… 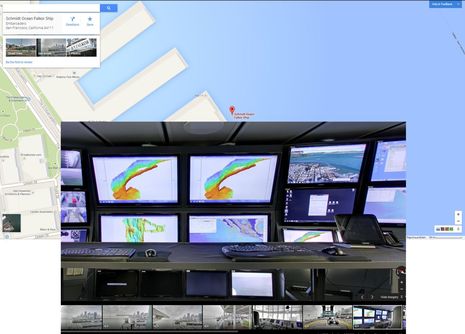 You might stumble on the “Schmidt Ocean Falkor Ship” while wandering the San Francisco waterfront in Google Maps — especially if you put a single ‘*’ in the search bar to show all points of interest — but here’s an easy link to the map screen above. Note the “See Inside” choice right next to the “Street View”; “inside” is a slight misnomer as the first click will take you to the R/V Falkor’s masthead, where you can check out the harbor, the deck layout, and even the antenna installs. While you cannot pan, zoom or click yourself to other levels of the vessel, that’s what the thumbnail images at the bottom of the inset do. In the image I had just selected the science control room (dazzling!), from which I could explore all over that deck…

It’s hard to overstate how thoroughly the vessel was photographed. I wandered around for a long time and I’m pretty sure that I still haven’t found all of what I’m told are over 300 panoramic sites (like the X seen on the floor of the engineer’s squared-away shop above) on nine levels. The resolution is so good that you can sometimes read what’s on the many bulletin and whiteboards the various crews use. Note that you can often click right through closed doors, and that it’s very helpful to download the Falkor’s deck plans here, where you’ll also find the ship’s specifications and equipment lists.
Note, too, that you can save a link in Google Maps that will take anyone to the exact “See Inside” photo view you select. So, say, a (goo.gl shortened) link like http://goo.gl/kccwz0 can lead right to Falkor’s impressive and possibly critical coffee machines. Please show us what you find particularly interesting on this very tricked-out research vessel, and extra point if you can find the purported “staff Easter eggs” somewhere in all the imagery. (Incidentally, a big thanks to occasional Panbo commenter Kurt Schwehr, who is now a member of the Google Ocean team.)

I got a particular kick out of the helipad views because they include several glimpses of America’s Cup 34 contender Oracle, which I’ll see racing this Thursday (soooo excited). That’s because the photo session took place in late July during one of Falkor’s infrequent dock visits. She’s now off Vancouver Island (status page here), but I’m told that Google Maps can’t move her “See Inside” icon along her track. While I suppose that nuance might be possible when and if satellite AIS coverage becomes public information, I’ll be happy just to see more interesting boats available for virtual tours, which is darn possible. 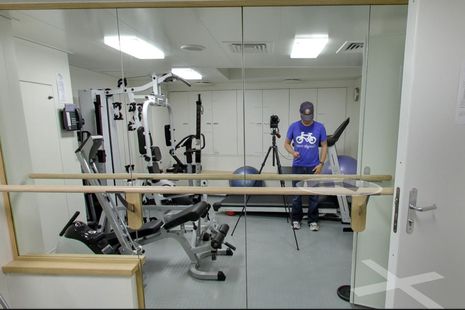 Now please don’t worry about a Google photography crew suddenly showing up on your boat, though that’s been some folks’ first thought when I’ve yakked about my Falkor tour. Actually, the vessel photo project is simply an extension of a program called Google Maps Business Photos, in which a company can hire a Google-approved photographer to take the panoramas and do the processing needed before they’re added to the business’s map icon as a “See Inside” choice. Fortunately, it doesn’t require a big custom camera, like those seen on Street View cars or even the relatively new backpack Trekker (which can now be borrowed if you’re worthy).  If you can find the R/V Falkor’s gym mirror (above),you can see the conventional 35mm camera that made all the panoramas, and here’s a great PetaPixel explanation of how it’s done. 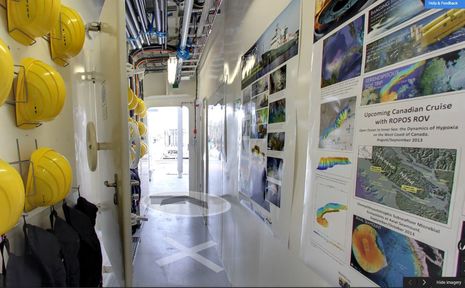 So, yes, apparently you can have your yacht photographed and added to Google Street View, which already includes some 20 petabytes of imagery. Brokers might particularly appreciate having Google host such detailed panoramas with their free fast servers — they can also be embedded on your own site — but it would be great to show off Gizmo this way, too. (In fact, I hereby volunteer my lovely boat to any Google “trusted” photographer looking for an interesting portfolio project and a little marketing via Panbo’s About page 😉
It took me awhile to realize why the R/V Falkor is the first Googlized ship, but then it made so much sense. Google President Eric Schmidt and his wife Wendy founded the Schmidt Ocean Institute with the vision of advancing our collective ocean knowledge “through technological advancement, intelligent observation, and open sharing of information.”  Apparently, a science team with a good project can use the R/V Falkor for free as long as they’re willing to share their data. That seems like a good thing for all, including laymen like me who like, say, seeing Falkor’s recent multi-beam mapping of the crater associated with what’s known as the Cretaceous-Paleogene extinction event (below). After touring this state-of-the-art research vessel, you, too, may want to spend time browsing Falkor’s cruising logs and expedition map/blog. (Right this moment, for instance, they’re live streaming a deep water ROV.) These days we don’t often see the incredible craftsmanship that distinguishes a lot of historical maps, but there sure is a lot of incredible cartography going on. 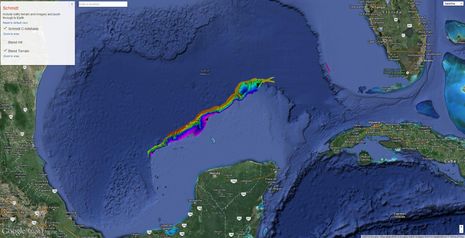