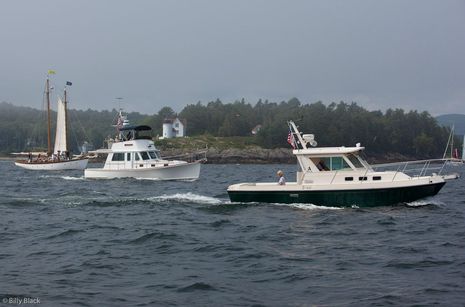 While I was enthusiastic about the first Penobscot Bay Rendezvous last summer, when the event actually came around I only managed to make a couple of the parties and do a little spectating (above). But I sure liked what I saw and am pleased that this year I’m helping to manage the PBR as the Powerboat Fleet Guide.  I like how the event welcomes both power and sail — and how it attracts a mix of local and visiting boaters too — but the powerboats need things to do on the Bay besides watching sailboats race (as enjoyable as that can be). The ideas were good last year, and I think we’ve improved them a lot for 2012…

PenobscotBayRendezvous.com has lots of information on the August 16-19 event, but let me point out some highlights, particularly for the power fleet. The underway activities for day one and two are what we call The Photo Pursuit, which is both a friendly competition to take good images around the Bay and a chance to learn how to capture even better images from some pros. It will also be an opportunity to get your boat photographed in a beautiful setting, and there will be lots more to see. Note, for instance, that the Texas Flying Legends Museum will show off their WWII aircraft over the PBR just before Friday’s race start, and that on Saturday the powerboat fleet will visit the village of North Haven for a special brunch at the wonderful Nebo Lodge.  And there will still be chances to watch sailors struggling to get around marks ;-)… 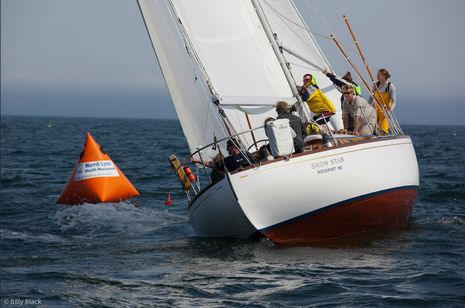 Organization wise, the PBR is frankly a promotional event — sponsored by two large boatyards and numerous businesses both local and national — but don’t let that put you off. For one thing, we just don’t do “hard sell” up here and, for another, even many locals haven’t yet enjoyed guided tours of Wayfarer Marine or Lyman Morse. And note that this year there will also be a presentation by Stanley Paris, whose remarkable Kiwi Spirit is being build in the equally remarkable LM boat shop seen below. Plus the PBR ticket pricing wouldn’t be so reasonable if it weren’t for the sponsors, and the ample food and drink are first class. 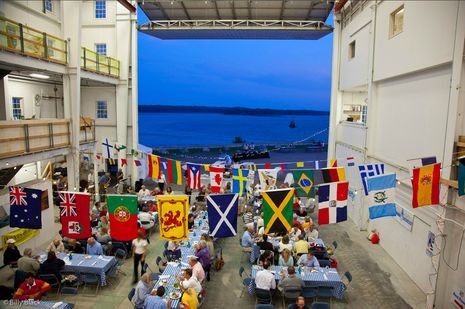 So check your calendars, poke around the PBR site, and consider an August rendezvous on Penobscot Bay. If you have any questions, especially regarding the powerboat part, please don’t hesitate to ask as that’s my job! 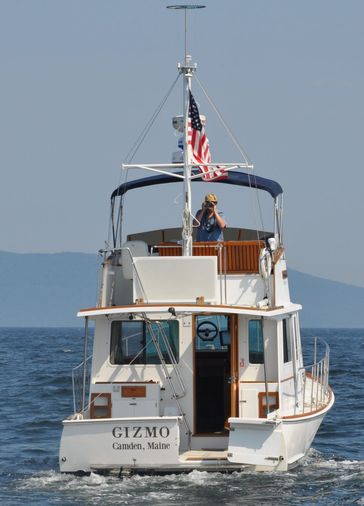 PS 6/27: I finished this in a hurry yesterday because I got a boat ride offer I couldn’t refuse (more soon), and thus left some good material out. Like the Powerboat Poker Run, which is sort of a goof wherein we pick up cards at various venues (often sponsors) both ashore and on the water, but which we’ve now combined with a historic boat tour of the Isleboro area narrated by Ben Fuller, the loquacious curator of the Penobscot Marine Museum. Ben is also going to pick some photos from the museum’s wonderful online collections that we’ll use “then and now” style during the Photo Pursuit.
What about marine electronics? Well, I haven’t actually broached the subject with the PBR team yet, but I think this event could be a terrific opportunity to see how AIS shore stations and cellular online-only AIS could work together really nicely so that every boat involved could easily see what’s going on during the sailboat racing and powerboat cruises, and even where the boats end up in Rockland and Camden harbors.
I’ve had my brother-in-law Rich Itkin experimenting with mAIS as he makes his way from Rhode Island to Camden and it’s not only tracked him well on MarineTraffic but also transitioned smoothly to his regular Class B when M/V Brilliant is picked up by a shore station. mAIS and AIS coexist fine, even on the same boat, and that means that in an area like Penobscot Bay where there is both good cellular coverage and AIS shore stations (more coming), every willing boat and all mandated commercial boats can be tracked online at virtually no extra expense. I’ll bet that even some of the Bay pilots and ferry captains find it useful to have an iPad or similar running Marine Traffic or Boat Beacon for extra situational awareness, or at least to see who’s winning the races. 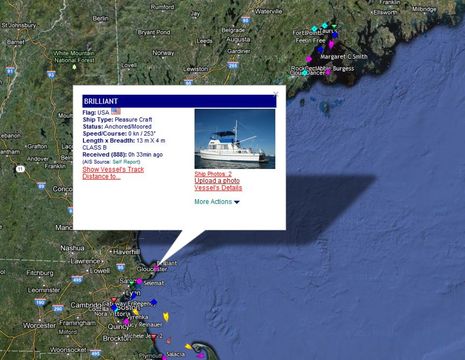