Actually, as you can see above, SEAiq lets you overlay both ActiveCaptain and Waterway Guide info onto its chart display (and easily turn either or both overlays on and off). But as noted on the SEAiq website, the AC data will not be updated after May 23, though “We are considering updating SEAiq support for ActiveCaptain but do not have definite plans yet.”

As Panbo has been reporting, third-party app support for AC is uncertain for a couple of reasons, but I’m hoping that it will turn out to be reasonably easy for developers to adopt Garmin’s new AC data distribution system (and free licensing requirements). In fact, I’m hoping to see SEAiq and other apps able to display both AC and Waterway Guide info well into the future. There is some overlap, suggested above, but the data is being sourced in two distinct ways, each with pros and cons. 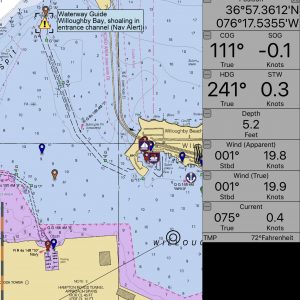 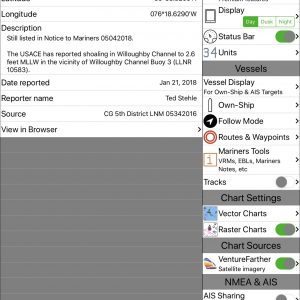 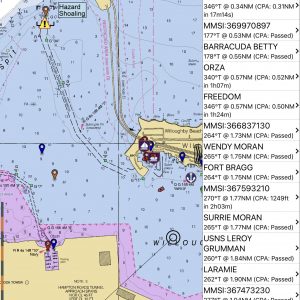 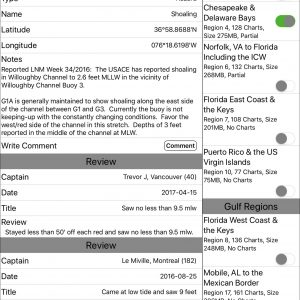 The four SEAiq iPad screens above show how the publication WaterGuide and the crowdsourced ActiveCaptain Community each handle a shoaling situation along the main channel into Norfolk’s Willoughby Bay (where Gizmo and I are waiting out a sou’west blow). I like the distinctive WG Nav Alert icon, and especially appreciate the Local Notice to Mariner’s detail that was entered by a professional editor, who also recently updated it. Now in this case, an AC captain also referenced the (original) LNM — and it’s quite nice that some other AC contributors reported on how well the added green can keep you in deep water, as it did for me this morning — but in my experience, AC Hazard info is pretty hit and miss.

For example, if I end up having to run some of the New Jersey ICW, it will be interesting to see if the few (but edited) WG Nav Alerts actually outperform AC’s way-too-many Hazard markers (you’ll have to pan/zoom the AC Livemap to Atlantic City, as it doesn’t seem to support location links anymore). I know from past experience that the AC shoaling warnings are often redundant and/or quite outdated, and the difficulty of using so many while also negotiating the skinny NJ ICW made me wish AC had pro editors. 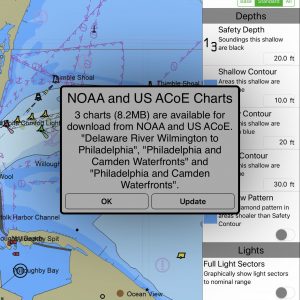 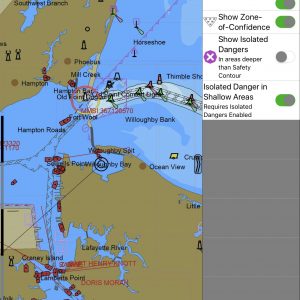 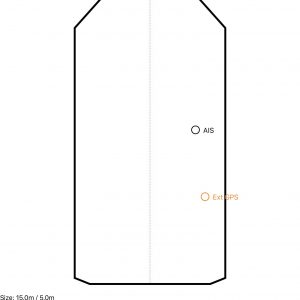 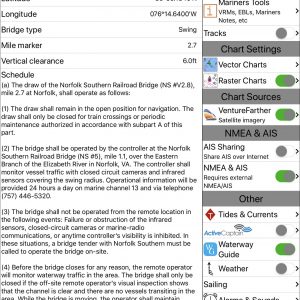 I hope you’ve also noticed in the images that SEAiq can do a whole lot more than showing WG and AC data, and get this: All the iPad screenshots here were taken using SEAiq USA, which costs just $5 (after the 7-day free trial) with access to all NOAA vector and raster charts. (There’s also supposed to be an Android version but I can’t find it). {Clarification 5/16: there is no SEAiq USA for Android.}

SEAiq’s main market is professional pilots, and even the recreational versions have a serious mariner feel, as I’ve tried to illustrate with some of the extra screenshots. I’ve noted the app’s excellent NMEA data over WiFi abilities in the past, for instance, and I think that SEAiq is the first charting program to display NOAA’s valuable Zones of Confidence. I haven’t figured out how that feature works yet, but I’m going to test the app some more.