Simrad ForwardScan (B&G too): a breakthrough even in beta testing 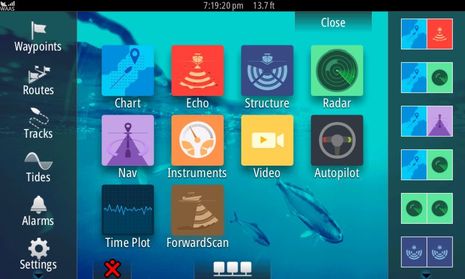 On Monday I got to poke around Baltimore Harbor with a beta test version of the Simrad ForwardScan announced last spring (discussed here on Panbo) and also introduced recently as B&G ForwardScan. Navico’s sonar product manager, Matthew Laster, brought along several versions of the NSS evo2 software that supports the new forward looking sonar (FLS) transducer, but loaded the latest, saying, “It hasn’t been tried on a boat yet, but I think it’s quite stable.” In fact, it was darn stable and I was quite impressed with what I saw…

Once the updates were installed, the Simrad NSS7 evo2 home screen, seen above, got that ForwardScan icon as did the NSS16 on the flybridge. That’s because FS is fully networked over Ethernet like most every modern sonar product, but notably unlike the EchoPilot FLS I’ve been testing since early August. The EchoPilot Platinum Video, which is the only other FLS system similar to ForwardScan currently available (I think), also involves installing two powered black box modules while FS requires none… 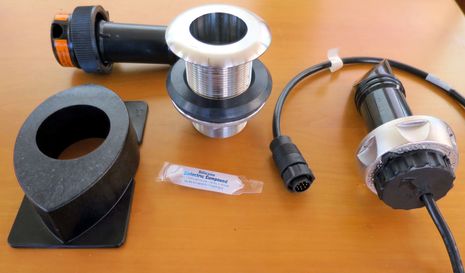 Here’s a look at the $799 FS hardware kit that is scheduled to ship at the end of October. Whereas I’d already installed an Airmar B617 bronze version of that same retractable stainless housing, I only had to pop in the new transducer and run the 30-foot cable up to the NSS16. I would have used the port on the nearer NSS7 but it’s already occupied with a StructureScan HD transducer. (Both units also include sonar ports and processing.) 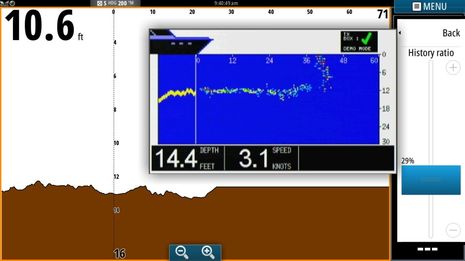 Perhaps the most significant difference between the Navico and EchoPilot FLS products is that ForwardScan attempts to translate the pings received back into a solid profile of the bottom ahead. There are many other differences — like the ability to adjust the percentage of screen showing a fishfinder-like historical bottom profile — but it’s the interpolated solid view that makes FS easy to understand and useful at a glance. 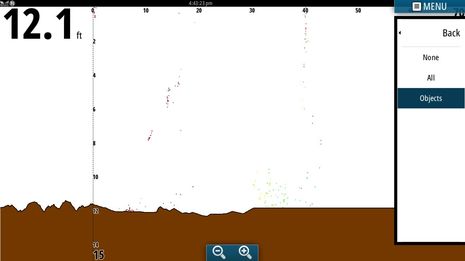 Personally, though, I wouldn’t be happy if ForwardScan only showed its guesstimated bottom profile. “What raw data is that based on?” my skeptical mind would be asking. But the designers handled this perfectly, I think, providing a “Data point” menu that lets the user alternatively overlay All the raw data or just the Objects above the interpolated brown bottom. The screen shots below were taken in All mode largely because it illustrates how the profile algorithm works, but it’s also how I’ll probably use FS for real gunkholing. 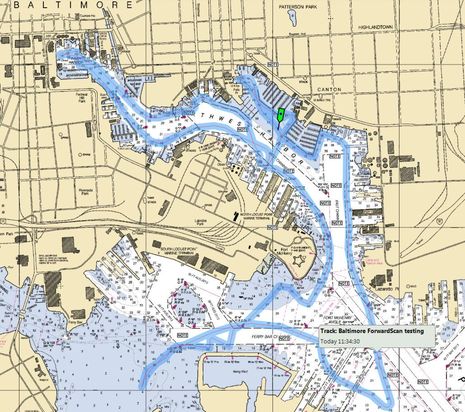 Not that Matthew and I didn’t nose around some dicey areas of Baltimore Harbor, and wasn’t that fun! You can see by the track above that we were rarely in the dredged channel or on the correct side of the nav aids, but that meant we got some great closeup views of this busy and fascinating port. And isn’t that what the freedom of boating is partly about and what a tool like FLS can help make easier? (By the way, NSS evo2’s ability to save a geographical region of tracks and waypoints as a GPX file made this Coastal Explorer screen fairly simple to make.) 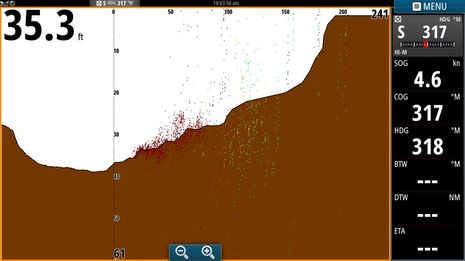 So here’s ForwardScan profiling a rapidly shallowing bottom about 200 feet ahead. That’s about 6 times the 35 foot depth under Gizmo’s keel, which is the sort of performance I saw consistently at such depths and in line with Simrad’s claim of maximum 8x forward view, nominal 4-5x forward view (though oddly B&G claims 10x, which should be corrected). Note that the 241-foot forward range shown on this screen is a little glitch that will likely get fixed before this software goes public (it was adding the 1-foot offset I’d applied to the sonar transducer)… 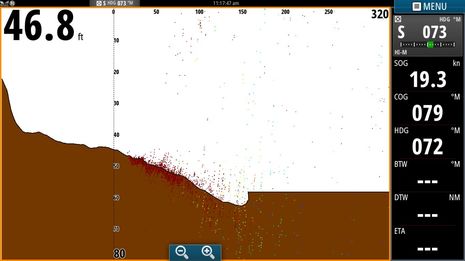 We’d zeroed out the pesky offset by the time this screen was captured, but the more important news here is that we were doing 19 knots and still getting data points beyond the 150-foot range that FS felt comfortable profiling. What the screens don’t show is how fast ForwardScan is working; the raw data changes rapidly with changing bottom and heading, and sometimes the distant bottom profile dances around as the algorithms struggle to make sense of it. Navico should make a video! 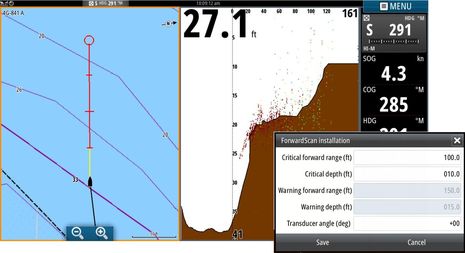 Here’s a good example of what can be done when FLS is deeply integrated in an MFD. In the ForwardScan Installation menu you can establish a “critical” forward range and depth that can show as red on your boat’s heading extension line in a chart window. A yellow warning range and depth is automatically set based on the “critical” number. Note, too, that if your transducer install isn’t vertical fore and aft you can correct about 10 degrees of error either way.

Here’s the ForwardScan main menu and View sub menu. Auto ranging works well and is in small enough increments that the screen area is well used. There are times, though, when you might want to manually change depth or forward ranges and the current scheme of doing both at once with the plus/minus buttons on the main screen seemed awkward. Maybe there should be two manual range controls on the main FS screen? I’m also lobbying for an “A” button so you can return to complete Auto mode without having to click down a couple of layers.

This screen, incidentally, was taken at Gizmo’s current marina slip, and I think the close “targets” relate to a large piling that seems slightly outside the 15 degree wide FS beam. Kelp, perhaps? Meanwhile I’m pretty sure the vertical data points at 40 feet show the sailboat that’s tied up perpendicular to me across the wide face dock. Matthew thought we saw fish sometimes in FS, though Navico is not marketing the technology in that direction (yet?), and he allowed that it may be possible to adopt the bottom profiling algorithms to “fill in” objects in the water column. Interesting! 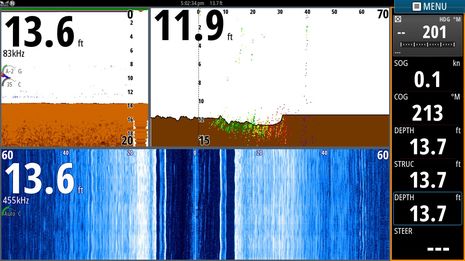 Here’s the NSS16 showing sonar, ForwardScan, and StructureScan all at once — three transducers, no black boxes. However, the shot also illustrates what seems to be a bug that I noticed but couldn’t verify before FS. The large depth numbers in each is purportedly generated by each transducer and the 1.7 foot difference between sonar and FS makes sense as the transducers are about 20 feet apart and the slip is slightly shallower at the bow. But the SS transducer is also mounted near the bow and should read quite close to FS; instead, it’s using the sonar number. Note that each of the three independent depth values can be accessed in a data bar — like the “STRUC” number above — which could be a valuable feature once Navico squashes the bugs. 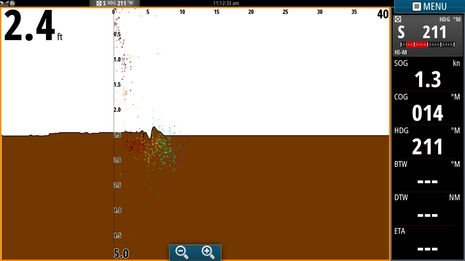 But I’m getting off track. The bottom line with ForwardScan is that it seems to have raw performance similar to what I’ve seen with EchoPilot FLS — i.e. keep your expectations modest — but Navico has truly advanced the data display, while significantly lowering the cost and install hassle. In regard to expectations I’ll close with a shot taken in extremely shallow water and mud bottom. FS couldn’t see very far and like EchoPilot, I’d say forward ranges at depths of 10 feet and less often slide into the 3X range. But we did image the gnarly wires hanging off that old barge (below), and I’ve got a lot of Chesapeake Bay and ICW to do further testing in.

Meanwhile, I’m now at the NMEA Conference and realized that I somehow missed the introduction of Raymarine CP200 SideVision. But hopefully, I’ll get to see it in action behind Sanibel Island tomorrow. The great sonar war rages on! 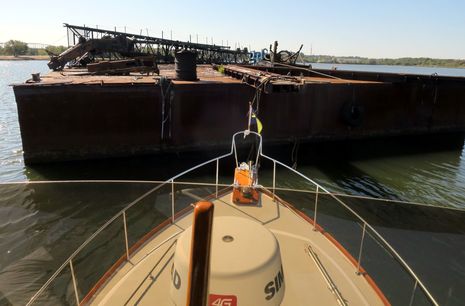 PS 12/5/2014: I finally scored a good image of ForwardScan improvements I saw at the Lauderdale show. The color-coded FS heading line is now an “ice cream cone” shape that also indicates the beam width of the transducer. They’ve also added some coloring to the bottom imagery that doesn’t show very well here but is useful. Plus I observed that the algorithmsare now drawing bottom at greater ranges. All good: 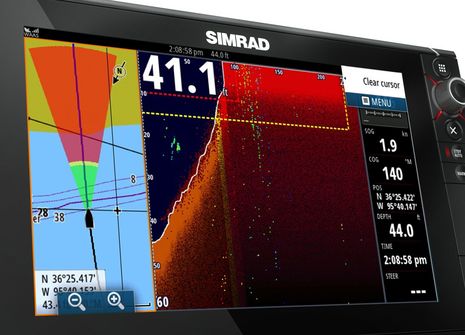