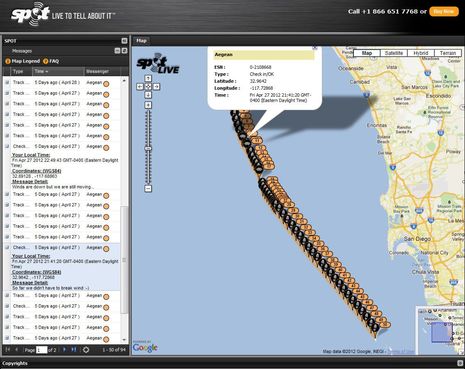 If it’s heartbreaking to see a cheerful-looking Aegean crew underway in fine weather less than 24 hours before they perished — as we discussed earlier this week — isn’t it even worse to know that they sent a fart joke to friends and family by satellite messenger just a few hours before everything went wrong on North Coronado Island?  Getting access (via Sailing Anarchy) to Aegean’s Spot Share Page is also how I surmised that they were using a Spot Connect rather than the more familiar stand-alone orange model, which is why they could send short custom messages typed on an iPhone, iPad, or Android device. Like “So far we didn’t have to break wind ;-)” There’s more I learned…

I’ve now read dozens of articles about the accident and made it mostly through 50-and-counting SA Forum pages even though some comments made me want to shower. Can you believe that some anonymous puke would mock the just-deceased owner of Aegean for racing in the cruising class with old-looking sails? But then again some SA posters were on the race course Friday night and some are working through theories about diesel or propane fumes that might have caused the apparent inattention to navigation. And, besides, I thoroughly believe in the concept of figuring out exactly why bad things sometimes happen on boats so that hopefully we don’t repeat the mistakes.
A personal lesson in all this for me is the ignorance of the mainstream media about AIS — couldn’t they at least Google it? — along with the surprising lack of familiarity many boaters have with Spot tracking and messaging. I spend so much time researching marine electronics and hanging out in the rarefied atmosphere of Panbo that it’s easy to forget how relatively exotic these technologies still are. Perhaps worse is when I ignore a decent device because I find some irritating faults with it and/or see a better system on the horizon.
Thus I found myself searching out the Spot Connect I’ve never mentioned testing last summer, and darned if it didn’t fire up fine on the same Lithium AA batteries I used then. Plus it paired to my new Galaxy Nexus phone without any fuss, proof again that some of the Bluetooth issues I had last year were due to my old phone, not the hardware being tested. I still think Spot made a mistake by not putting a tracking control button on the Connect but if the phone connection is as easy as it seems now having to pull up the app just to start or stop tracking is not so irksome.
The Connect also acquired position and delivered a custom message in just a few minutes from my backyard, and it just took an icon touch to also make it the Tweet you can see in the 2nd column. 41 characters isn’t much but Connect — product page here — remains the least expensive satellite messaging and tracking system I know of. Plus there are options to easily contact a distress center or Vessel Assist towing with your position, and the accuracy and reliability of the GPS and Globalstar messaging have gotten better and better over the years since Spot first appeared. For instance, tonight’s test message is within 15 feet of the Connects actual position if you use the photo map overlay on my share page and I saw a regular Spot messenger deliver every 10 minute track point for days at a time when my friends Arnie and George sailed south last fall.
I think that Spot is a mature and reasonably priced technology and could be useful to lots of boaters, though hopefully not the way it’s been in the Aegean incident. However I can’t help but mention the Iridium-based two-way messenger/trackers like Cerberus, YellowBrick, and inReach. They’re more expensive and have new product issues, but I’ll have some good news on the latter soon. I may be an out-of-touch old fart, but I think that lots of boats will sport satellite tracker/messengers eventually. 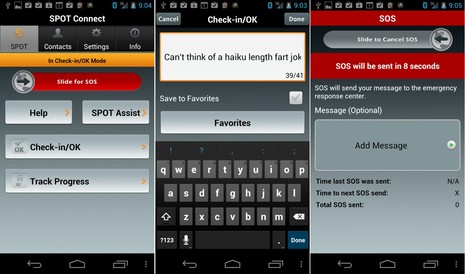 PS John Neyland, formerly with Garmin, sent this photo along with these words:

Theo Mavromatis was a very interesting and intelligent guy who you just really enjoyed working and spending time with. He was a true innovator when it came time to decide what to engineer because he knew that any successful product needs BOTH quality engineering AND a practical business use case that will allow the product to be sold across as many markets as possible. I will miss the relationship with Theo as well as his “always on and thinking outside the box approach”. Rest his soul at Sea aboard his pretty 37 Hunter Aegean. 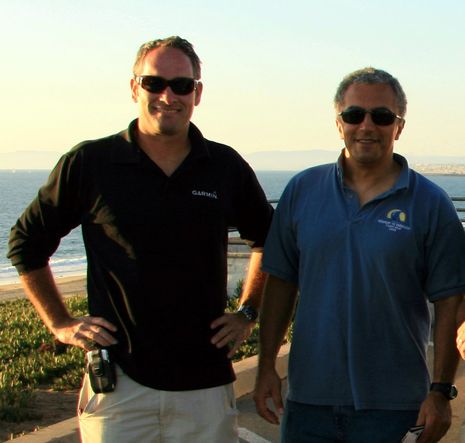