Testing Lithium Ion engine jumpers (plus), from Weego and Cyntur 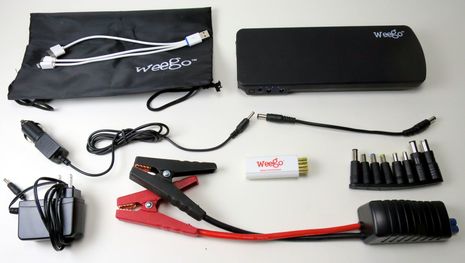 Most boaters will not experience the benefits of a Lithium Ion main battery bank any time soon, but nearly instant gratification is possible with a portable Li Ion charger pack, some of which can even jump start a small diesel engine. Brands and models are proliferating like fruit flies, but I’m particularly keen on the WeeGo Jump Starter Pro above, which I’ve been testing for a couple of months. It is a veritable Swiss Army knife of an on- or offboard power source… 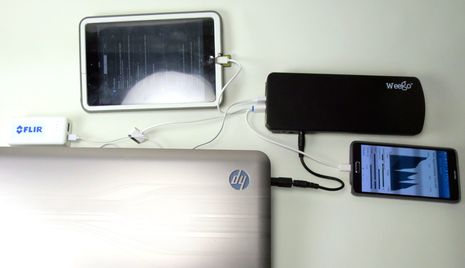 While the top photo shows the complete WeeGo Pro kit, this photo illustrates how hard it can work. Since one of the USB ports outputs 2.1 amps, I was able to top up both my iPad Mini and Samsung Note4 using the included split cable with Lightning and micro USB connectors. And remember that iPads don’t like some USB chargers and few power packs come with Apple connectors (apparently because you-know-who makes licensing difficult).

Meanwhile I’m using the 1 amp USB port to top up that small (FLIR gifted) power pack that could have yet another USB device charging off it. But the particularly useful thing for boaters trying to use a laptop on a 12v boat is the WeeGo’s 19v (and 12v) outputs. This could save you having to buy and manage a dedicated or universal 12v laptop charger for your boat. Unfortunately though, laptop power connectors are extremely varied and none of WeeGo’s adaptor tips work with my current HP Pavilion (though WeeGo is looking into alternative sources).

The Pro’s 18000 mAh Li Ion battery would power that setup for quite a while, I believe, and you could plug its 12v charger into the boat and thus keep everything continuously topped up with the WeeGo ready to swing into jump start action. 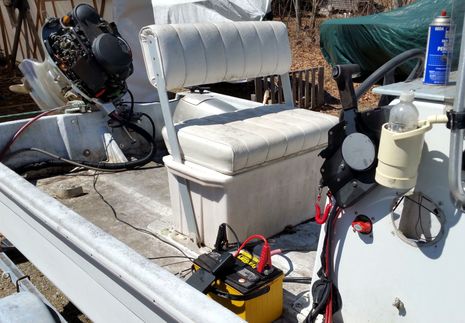 I’ve had a hard time finding a realistic jump start situation, but before I explain the photo above, let me express deep shame before the boat deities for how badly I’ve ignored L’il Gizmo since her big sister came into my life. So it wasn’t a big surprise, or the WeeGo’s fault, when the Honda 40 wouldn’t turn over at all (and it’s now in the hands of a real mechanic).

The test was impressive nonetheless. That old yellow battery was barely alive — showing 10.5 volts with no load — but the Pro happily ran the Honda’s tilt hydraulics up and down until my finger got tired pushing the buttons. I didn’t even see the Pro’s five blue status LEDs show a drop in charge level before concluding that the relatively small Lithium Ion battery has a LOT of gumption. The claimed maximum jump capacity of a 4.8L diesel (about 140 horsepower) or “most gas engines” — or in other words 300A current, peaking to 600! — seems realistic, though Li Ion punch-to-mass ratio takes some getting used to. 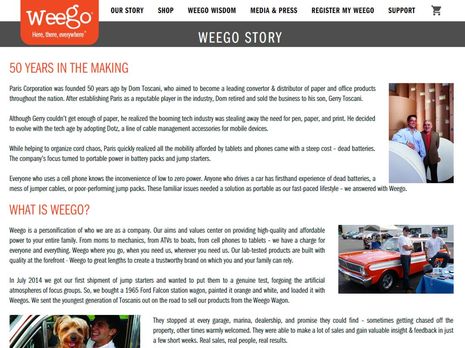 All the Lithium Ion power packs seem to be manufactured in China, but I’m fine with that if someone is making sure they’re made well. WeeGo is definitely the right sort of company for that, as well as solid distribution and customer service. In fact, WeeGo has a particular interest in the boating world and introduced the WeeGo line at the Miami show. I like the concept of a longterm family business with their own testing lab making sure a product like the Pro is safe. Afterall, if you mess up with those battery clamps, you’re apt to see more than just a spark, but the WeeGo Jump products have internal “over-charge, over-discharge, over-load, over-current, and short-circuit protection,” while the clamps themselves have a fuse and a diode which protect against over-current and reverse polarity. (That fuse, by the way, has to be replaced by WeeGo, which is even more reason to clamp first and then activate.) 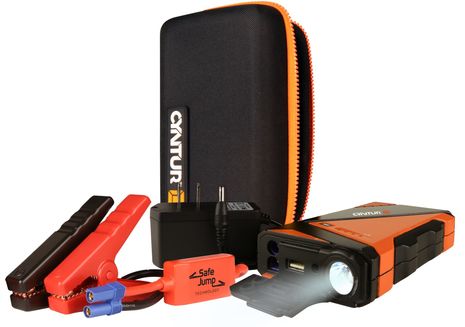 I also tested a Cyntur JumperPack mini which claims 250 cranking amps from its 12000 mAh Li Ion battery. It, too, seems quite well made and it’s less expensive than the similar 12000 mAh WeeGo Heavy Duty model, though also less versatile as a device charger.

I still haven’t run an engine battery dead enough to test either product’s jump start abilities — call me if you’re stuck somewhere nearby — but I did use them to test the SL Sprint 1000 anchor windlass I reassembled on Gizmo before leaving North Carolina. Replacing the motor and some gearbox bearings became an epic repair involving starter shops in both Maine and NC (and a parts supplier in the UK), and it was great to see it run again before reinstalling it on the bow. The WeeGo Pro was a little easier to use because I could switch the jump power on and off (and it may have more levels of protection), but both packs seemed willing to turn the windlass for a long time and I think they might be able to pick up Gizmo’s anchor. Lithium Ion technology is pretty impressive in this form and very available. 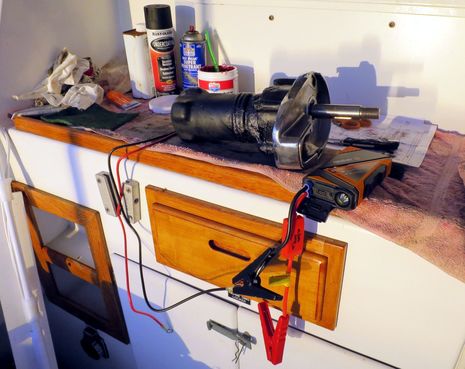