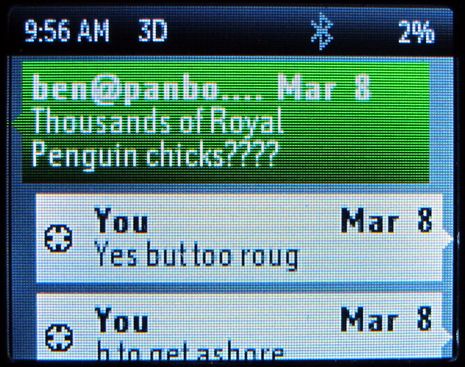 “Two way” doesn’t just refer to the fact that a DeLorme inReach handheld satellite messenger/tracker will let you text back and forth with people pretty much like a cell phone. I also tested the shore side of the system by loaning the sample inReachSE model to friends Doug and Dale Bruce when they went on an adventure cruise to some remote islands south of New Zealand. So that’s me messaging from Maine when I saw where they were headed (via their MapShare track), and then Doug texting me back a few minutes later. Yes, he had a little trouble with SE’s little cursor keyboard, but heck, he was in rough seas on the other side of the planet! 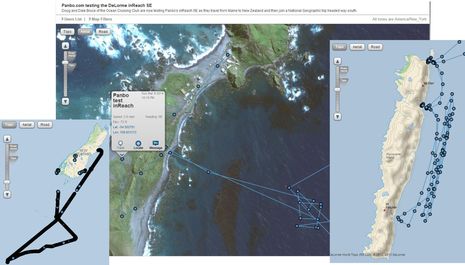 I was pleased with how well I could follow the Bruce’s trip on the DeLorme MapShare site associated with the device. You can see in this collage of screenshots that it took a while for Doug to find a place near their stateroom window where the inReach could see both the GPS and Iridium satellites it uses, but from then on track points with speed and altitude were captured almost every 10 minutes. So I was already learning about the amazing geology and wildlife populations of Macquarie Island as the ship approached, and I “watched” as the Bruces went ashore at the science station and spent a night running back and forth in the island’s lee (because it can get rough between the Roaring 40’s and Screaming 60’s). It wasn’t like actually seeing, hearing, and smelling half a million penguins on a cobble beach, but it definitely brought some excitement to a cold Maine winter. (You can still zoom into Doug and Dale’s trip on the PanboTest MapShare page, which also shows many other test tracks made since 1/1/2013.) 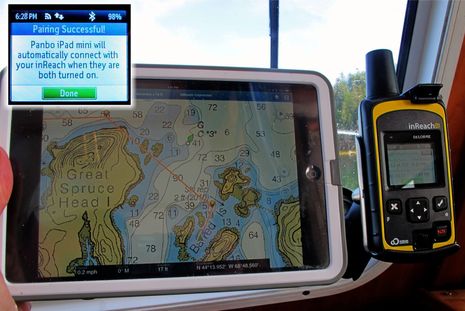 I’ve been testing the inReach system since late 2011, when the first model came out, and I became even more of a fan as the software improved and an iPad version of the Earthmate app was added. The release of the inReachSE (Screen Edition) model about a year ago got me pretty excited, and I remain that way after a lot of time using it myself. When the inReachSE is running, my iPad mini automatically connects to it and Earthmate tracks me on freely downloadable NOAA charts and worldwide topo maps while also handling messages. Nav apps can also use the inReach GPS. And the SE is much easier to leave on and tracking because of its 100 hour lithium battery and easy USB charging (and also a nifty custom RAM mount accessory). I don’t use the color screen and keypad much on the boat, but it certainly extends the device’s standalone abilities, though it is not a standalone navigation tool. 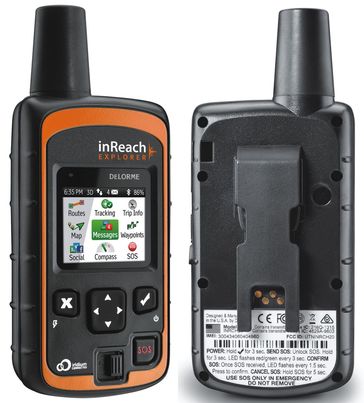 However, the brand new inReach Explorer is a standalone navigation tool, and not just an SE with new software and trim color. It can definitely do all the satellite messaging and SOS the earlier inReaches can, and it has the Bluetooth app connection, but also inside are digital compass, barometric altimeter and accelerometer sensors for better handheld navigation, and probably more processing power… 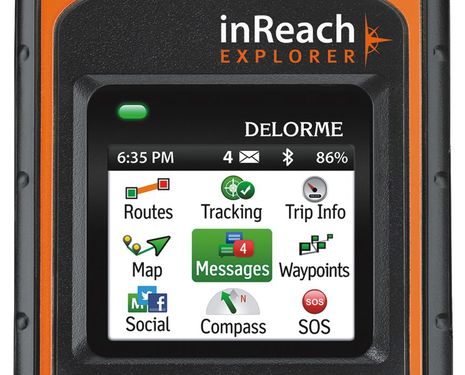 I’m not sure the Explorer is great for marine navigation — the Map icon, for instance, only gets you to a sketch of your track and waypoints — but it could be useful on shore hikes (it has track back function, too). But the Explorer is only a $80 upgrade from the $300 SE model, and I’m also intrigued by the description of how a user will be able to create routes on their DeLorme Explore “portal” (website), which will presumably sync to their Explorer handheld. Will the users of other inReach models also get routing on their Explore portal, which might sync to their Earthmate app (when online)?

I’m happy to add that the inReachSE and Explorer models now have a worldwide weather option thanks to OCENS SpotCast (which also works with Iridium Xtreme and Inmarsat IsatPhone Pro texting). Of course it has to be quite succinct to fit the inReach’s 160 character maximum, but it looks like OCENS has designed the service cleverly. Each message covers 24 hours in four six-hour forecasts and if you’ve purchased the 72 hour option — unlimited forecasts for $8 a month or $80 a year — you can ask for 1, 2, or 3 days at once. The latter detail is nice because the messages will also come out of your service plan, but note that DeLorme started offering a very flexible Freedom Plan earlier this year. 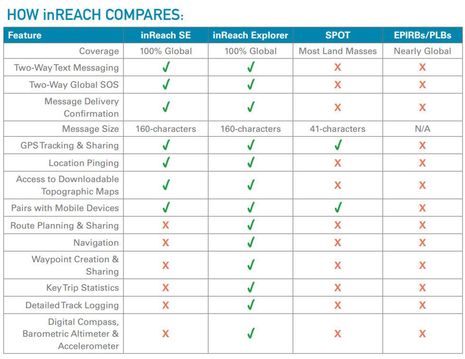 So how does the DeLorme inReach system compare to the SPOT product family these days? The table found in the inReach brochure (download here) is a start. The only inaccuracies I can see are that SPOT covers much more ocean than “Most Land Masses” suggests and that the only Spot model that can pair with a mobile device is the older Connect. But of course the trick to comparison tables is looking for the lines that the manufacturer who created it left out. In the case of inReach versus EPIRB/PLB I think the missing lines involve international search and rescue authority management and history of reliability. For inReach versus Spot I guess the missing lines relate to cost and simplicity… 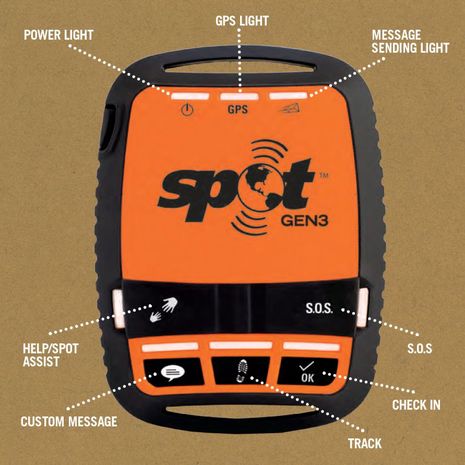 In fact, I tried a beta version of the Gen3 Spot last summer and it really is an improvement on previous models. The power options are much more flexible and batteries last a lot longer because the Spot3 stops sending track positions when you stop moving. It will also track indefinitely instead of shutting down after 24 hours. These are important changes because the Spot has become quite popular for boat tracking. But I don’t think many boaters use the other features; after all, the “custom message” button only means that you can send a message you already wrote on your Spot website and there are no return messages. I was a Spot fan for many years, but now the technology seems quite dated compared to inReach.

I was a little surprised, for instance, that the Spot3 doesn’t include the Bluetooth and app features already developed for the Connect model, so users could have both standalone and mobile options (like inReach users do). And I didn’t see many improvements in the Spot tracking and management site; it still seems complicated to use and still only saves data for 30 days (though there are workarounds like Spot Adventures). Meanwhile, the DeLorme Explore site keeps getting easier to use and yet more powerful, and it has saved years of my tracks and messages now, fun to look through. Obviously I favor inReach. Am I missing something? 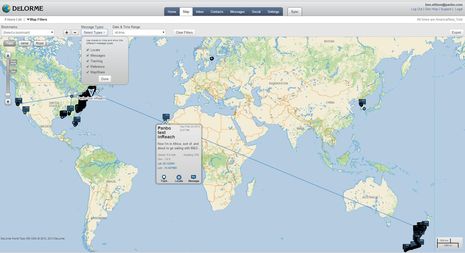