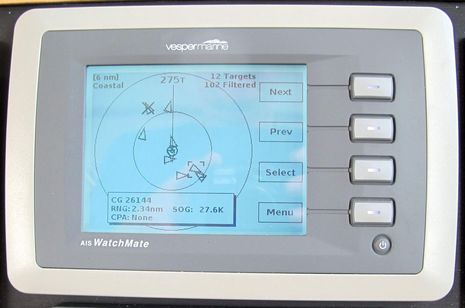 New York Harbor demands your attention even when you have lots of great electronics including what’s arguably the best recreational-level AIS target tracking system. That’s my excuse for not photographing the ideal example of the Vesper Marine AIS WatchMate 850 at work in heavy traffic. A more compelling shot might be more zoomed in and would have at least one solid target icon indicating a vessel(s) that had reached the Vesper’s highly configurable alarm level. But do note how the WatchMate is tracking 114 targets at this point in time though it’s also filtering 102 of those off the screen so that yours truly can better see the ones that matter. That in itself is worthy of discussion… 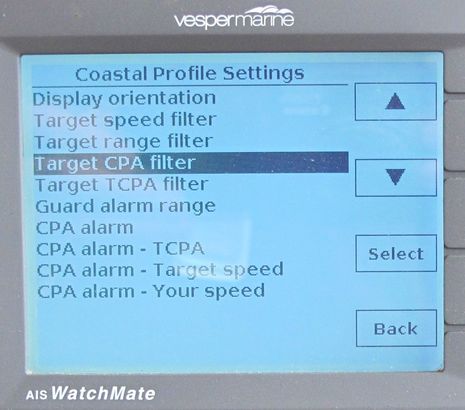 The screen above shows all the settings available for each of four WatchMate profiles, the idea being that you can have four different sets of filter and alarm settings for different situations like the Anchored, Harbor, Coastal, and Offshore defaults. Note that besides the display orientation — north or head up — and the circular guard range alarm, there are four ways to filter (but not ignore) targets and four possible CPA alarm parameters. All the WatchMate products have had this advanced collision avoidance system since I first heard of Vesper in 2008, which makes it all the more mysterious that so few AIS plotters have adopted their good ideas. 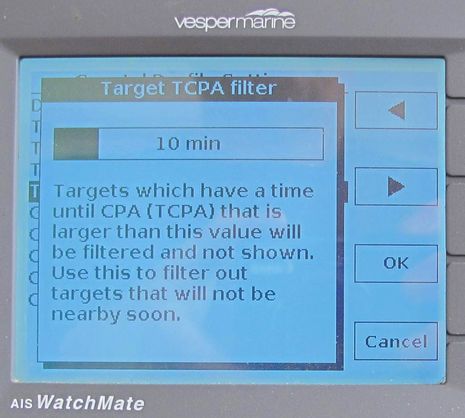 Above is a somewhat random example of filtering I shot on Gizmo yesterday. In fact, I’d be quite careful about filtering targets off the screen based on TCPA, especially in New York Harbor where 30 knot catamaran ferries constantly jet around often outside the shipping channels. A sharp turn could quickly change their TCPA from never to 2 minutes and that’s not when I want them to suddenly pop onto the WatchMate screen, even if that change also kicked off a CPA alarm. But I’m sure that this filter makes more sense in some situations; the paramount goal of maximum meaningful alarms and minimum annoying alarms wherever you cruise is challenging. Besides, on many bridges the WatchMate serves as the primary collision avoidance display while all AIS targets, unfiltered and unalarmed, show up on other screens. The WatchMate supports this with NMEA 0183 and USB outputs, and Vesper’s newer models add NMEA 2000 and WiFi. 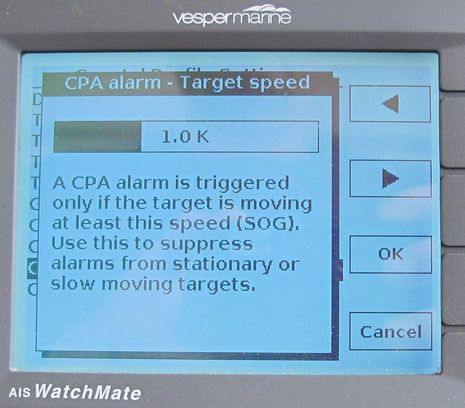 Above is a CPA alarm setting that I often use because I generally don’t need to get alarmed about a stopped target no matter how close I chose to get. I also filter out the stopped target screen icons in a place like New York so I can see the critters in motion instead of the forest. I wonder sometimes if the folks who fret about the proliferation of AIS, usually while looking at a zoomed out screen loaded with oversize target icons, understand how relatively easy it is to track hundreds of targets but still focus on the ones that count. Heck, there’s no magic to these settings; the targets themselves are constantly delivering the data they’re based on (unlike MARPA where your electronics are trying to figure out the other vessel’s course and speed by comparing your boat motion to that of a dumb radar target). 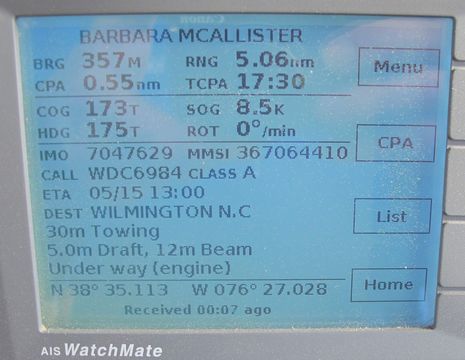 And there’s more. The WatchMate target detail screens are neatly designed to deliver the most important information efficiently. For instance, if a Class A vessel has not entered a destination into its transponder Vesper doesn’t waste your brain cycles by putting “DEST ____blank____” on the screen. But this particular screen is what you get when a CPA Alarm sounds and at first the second button down reads “Mute.”  The “CPA” button that then appears is especially interesting… 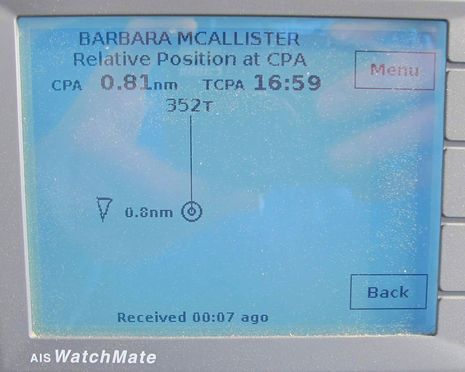 WatchMate is not the first AIS plotter to graphically illustrate what a particular CPA will look like; I saw and liked it in Capn Voyager software many years ago. Again, why hasn’t this view proliferated?  While it’s great to know with some certainty that if you and another vessel maintain course and speed the Closest Point of Approach will be, say, 1/4 mile in 12 minutes, you still may not know if that means you’ll be crossing the bow of big, fast ship — yike! — or nicely passing astern. This screen instantly gives you the answer and moreover will change in real time if you or the target change course or speed.

Some developers are improving their AIS display and alarming, and I was happy to recently spot the Simrad NSS screen above. I like the term “Icon Filters” as it clearly doesn’t mean “Target Ignoring” and those settings would help a skipper negotiate a busy place like New York Harbor, though, again, I’d be careful with the combination of “Hide Safe” (Safe = not causing CPA alarm) and those fast turning ferries. I also like the way Coastal Explorer graphically advances Class B targets, which only transmit data every 30 seconds, and orders the target list into “Passing” and “Not Passing” sections. Does your AIS plotter do something you find particularly helpful?
Meanwhile, Vesper Marine has two interesting new WatchMate transponders, though they were perhaps a dite early announcing them. Seeing the Vision model (below) pop up in a Defender ad on Panbo is one sure sign that this color touchscreen WatchMate is finally available here in the USA. I also notice that Vesper is pairing the new blackbox XB-8000 transponder with a WatchMate 670 so you can get the new generation input/output along with the same low-power plotting display seen above.  I have not yet had a chance to try Vesper’s new generation and would love to hear from those who have. No one, though, has yet seen how these products will evolve. A transponder with 0183, 2000, USB, and WiFi can conceivably do a lot more than AIS as Vesper has already demonstrated with their anchor watch feature. 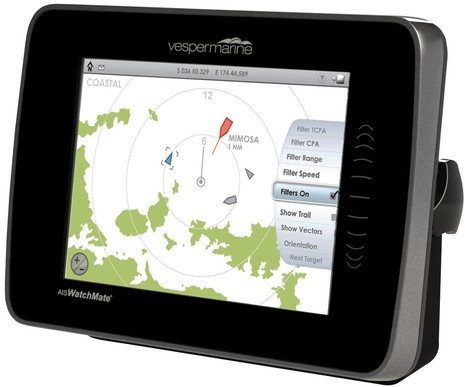