I often use and deeply appreciate the bundle of clever features that Vesper Marine calls SmartAIS, but darned if I didn’t miss one. While the WatchMate app screen above shows some aspects of the Vesper collision avoidance intelligence that makes this my favorite real-world AIS plotting tool (among many choices), it is actually a built-in simulation with significant benefits. So while no one actually fell off Gizmo today, and no AIS MOB signals were actually transmitted, I still got to see how various MFDs and instruments reacted to a “real” AIS MOB transmission. For instance, here is the Garmin 742xs on Gizmo reacting to the AIS MOB simulation I started in the  Vesper app, and mind you that this is not necessarily what happens when you send a real AIS MOB test message. Test signals are a great feature of AIS MOB devices, but seeing how your navigation screens will respond to actual MOB messages tests that end of the system even better, I think, and in this case you can try it before you even purchase any AIS MOB beacons. But, wait, how can an app send AIS messages around a boat? The left screen above shows how you start the “TamakiStraitMOB” simulation in the WatchMate app, but the data actually comes from the Vesper XB8000 Class B AIS transponder that the app is connected to over WiFi. The bad news is that you can’t see the simulation without an XB8000 connected, but the good news is that the simulation data also goes out over NMEA 2000 and 0183 to all connected devices on your boat that you may hope will know what an AIS MOB is.

In fact, the WatchMate app and the XB8000 often relate like this, and it’s extra smart in my opinion. For instance, you can set up and mind an anchor watch with the app, but the actual calculations are happening in the XB, and that’s why the alarm will go off when you drag even if the tablet or phone running the app is turned off or asleep. Here’s more SmartAIS anchor watch detail, plus smartwatch integration, and the same is true of collision alarms.

But let’s get back to the AIS MOB testing, which includes a challenging twist: The simulation takes place near Vesper’s homeport of Auckland, New Zealand, so it turned out that Gizmo’s test MOB was almost 8,000nm away. 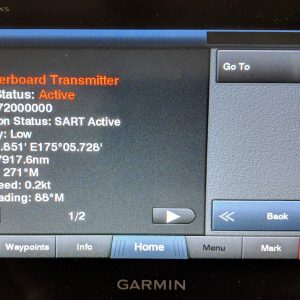 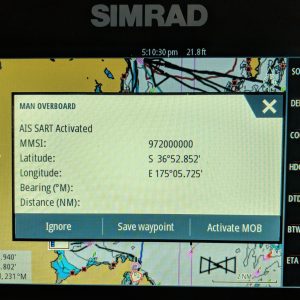 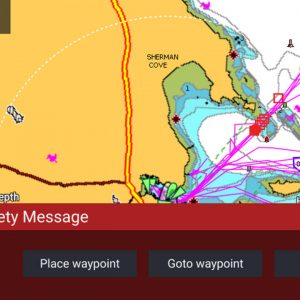 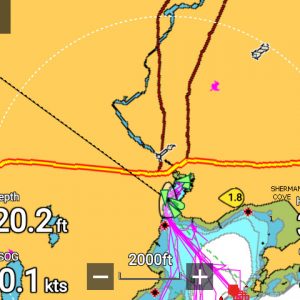 The Garmin, Simrad, and Raymarine 7-inch MFDs at my lower helm all reacted well to the simulated AIS MOB, though slightly differently. Essentially you want to be visually — and audibly, there were much beeping — alerted that someone may have gone overboard and then quickly set a waypoint or MOB waypoint (same thing) to help you get back to the spot (though the beacon’s special AIS icon will likely be a more accurate guide if it keeps transmitting). Or, if the signal is actually coming from some fool who accidentally activated an AIS beacon (ahem), you’ll want to OK or Ignore the alert away.

I’ll add that the test boat’s Raymarine i70 instrument also showed the AIS MOB alert (loudly) but the Garmin GMI 20 did not. So if you have a Vesper XB8000 installed and are considering AIS beacons (or already have one or more), I highly encourage you to try the MOB simulation, and I believe that the same feature is available in the fairly new WatchMate Vision2. And though it didn’t occur to me on the boat today, this test should also work with the many third-party apps that can display SmartAIS data coming in over WiFi, some of which may not know how to alert or display an AIS MOB.

And, finally, you may enjoy torturing your MFD by setting up the MOB GoTo waypoint many thousands of miles away (Kiwis excepted) and then see if you can pan the chart to its location and see all the other simulated AIS traffic there. I’ll close with a memorable real-world example of Vesper’s core AIS plotting smarts. Fortunately, it was calm conditions and clear daylight off New London when I got into this snarl, though I remain somewhat surprised that I managed to get screenshots. I was safely by the first large and fairly fast vessel that the XB8000 had alerted me about via the WatchMate app (according to CPA/TCPA and other factors like target speed I’d set), but, yikes, here comes the 108-foot cross Sound ferry SeaJet I at nearly 29 knots.

Now a Closest Point of Approach (CPA) of 0.07nm in six minutes (Time of CPA) is always concerning, and that’s important information that most any AIS plotter can deliver, as in the earlier WatchMate Detail block at left or the CPA/TCPA labels that WatchMate is putting on all targets of interest. But often the critical missing information is just where that CPA is going to take place, especially when it’s ahead or astern of the other vessel. But I was able to just tap on SeaJet I above to see a plot of what was going to happen if we each maintained speed and course…and it was not good.

In fact I was already working on a plan and we passed safely starboard-to-starboard with foreknowledge. It’s great to see similar radar and AIS CPA/TCPA plotting coming to some MFDs like Furuno TZT2 and Raymarine Axiom, but credit Vesper with making this scene a lot easier.