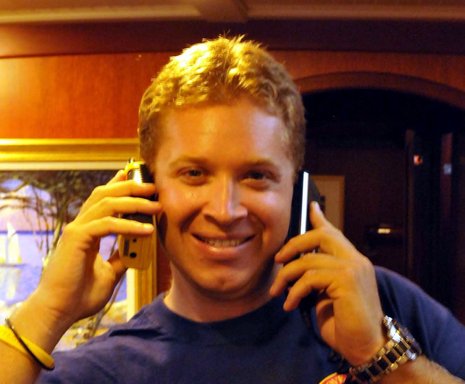 Visions of Johanna is now on the coast of Ecuador, the vast Pacific beckoning.  As discussed recently, Gram Schweikert has set the sloop up to test and compare the new compact satellite voice/Internet systems from Iridium and KVH/Inmarsat.  Above he’s geek goofing with the KVH IP Phone and a Uniden waterproof portable which
can access four lines — Skype, cell, Inmarsat FB150, and Iridium OpenPort.  But he’s sure been doing his homework.  What follows is the longest Panbo entry ever, in which the good Gram details the hardware, the installation, the costs, first impressions of performance, and plans for future testing…

The Iridium OpenPort and KVH Fleet Broadband 150 hardware packages are quite similar, consisting of an antenna dome, connecting via a single cable (carrying power and signal) to a BDU (Below Deck Unit). The BDU has connections for power, antenna, Ethernet LAN, and an analog POTS (Plain Old Telephone System) telephone jack.

The Iridium OpenPort antenna is a 22″ diameter by 9″ tall solid state unit which connects via a heavy duty, shielded Ethernet cable (50m supplied) with a waterproof connector on the antenna end wired via a grounded Ethernet jack to the BDU. There is also one LAN (Ethernet) port and 3 telephone lines as the system supports multiple lines and simultaneous calls. Power and ground connect under a service cover via screw terminals. 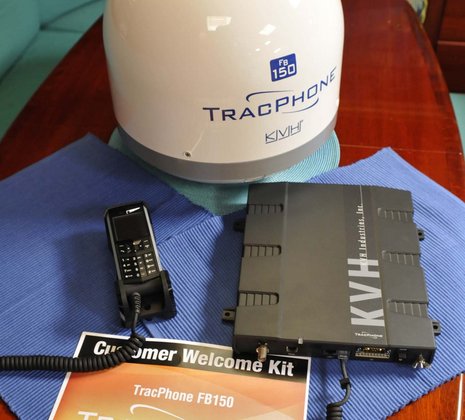 The KVH FB150 antenna (seen above) is packaged within a 13.5″ diameter by 13″ tall stabilized antenna that is also available in a larger dome to match a TracVision TV system if desired. It attaches via a RG223 (.213″ diameter) double shielded coaxial cable (35′ supplied) with TNC connectors on both ends. The BDU connects to power and an optional remote power switch via a specialized cable that looks a bit like a monitor or serial cable jack, but has two larger pins for the power. It also has one telephone jack and two LAN ports, both with POE (Power Over Ethernet) to allow use with the included IP Telephone Handset.

Both OpenPort by Iridium and the KVH Fleet Broadband 150 have similar requirements for antenna placement including a clear view of the sky and separation from radar. For most sailboats, this restricts options for antenna mount locations to the spreaders. Luckily, we were already pulling the rig for inspection and a lower end paint job last spring, so it was fairly easy at that time to add port and starboard spreader mounts. I also ran the two sat com cables and a new masthead AIS antenna cable with the rig down. 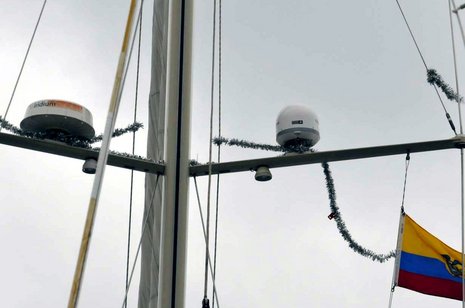 Finally, I decided to design custom stainless steel spreader mounts using 2″ threaded pipe on the spreader mount and a 2″ threaded pipe coupling welded to an antenna base plate that will allow me to match any bolt pattern. This was partially because at the time KVH was still determining the antenna housing and therefore couldn’t give me a bolt pattern, but it also allows easier changes in the future and came very much in handy when attaching the FB150 antenna with the rig up. It is a bit hard to see the details of the custom mounts in this picture due to our Christmas decorations/bird deterrents wrapped around them, but hopefully you get the gist.

Installing the Iridium system was quite easy. The self install kit provided was thorough, with printed manuals, all the hardware and bolts required, and even a plethora of screws, wire-ties, and numerous suppression ferrites that weren’t even called for in the installation instructions. The kit includes a 50m shielded Ethernet cable with a large waterproof connector on the antenna end, and an somewhat unusual shielded Ethernet jack on the BDU end which you are instructed not to cut or splice. As I am familiar with crimping Ethernet jacks, and had located a crimpable Ethernet jack with a grounding shield, I elected to cut the end off in spite of this to ease running the cable through the crowded mast conduits. This also allowed me to shorten the cable length to avoid a large coil of cable down below. I did try a splice connector at the mast base to ease removal of the mast in the future but, as the manual suggested, this caused problems with operation of the system, so I had to remove that splice and run the antenna cable directly to the BDU sans splice. This is a downside of the system as it limits where you can position the BDU if mounted on a mast or other pole that needs to be removed with any regularity. For a boat like ours which doesn’t pull the stick every year, it isn’t too big a deal, but for some, this could be a significant hurdle.

Installing the FB150 was similarly easy. When the rig was down I ran a length of RG223 coax from the antenna base to the Nav station with a TNC splice at the mast base to ease spar removal and crimped TNC connectors on the ends. In September when I received the unit I attached my custom base to the antenna, hoisted it on a halyard, screwed it down onto the spreader mount and connected the previously run antenna cable. Below deck installation was as simple as connecting power (10.5V to 32V acceptable), running an Ethernet cable to the computer, a phone line to our PABX (Personal Analog Business eXchange — allowing 4 lines to be accessed by our waterproof portable phone), or any analog phone, and hooking up the supplied Thrane & Thrane digital IP phone to the second LAN port. I connected the optional remote switch circuit (which shuts the system down when shorted) allowing the unit to be shut down conveniently, as it is on a shared circuit with the OpenPort system.

The only significant difference in installations that I found was in the parts included with shipment. Whereas OpenPort included everything you need (and many things I didn’t), the KVH system did not come with ancillary parts or with a printed manual, coming only with a quick start guide and a CD of PDF’s. Since I did the FB 150 install in Panama, procuring the needed parts was no simple matter. For instance, the FB150 mounting plate required 6 mm threaded bolts, and in the absence of a nearby friendly neighborhood marine store, I found myself wandering the docks at Shelter Bay Marina asking other boats if they had any to spare. Luckily we found some from a European boat and we were able to cut them down to proper length. I also find that installation and operation manuals are helpful during the installation process. The lack of printed materials is a pet peeve of mine, but is also a practice that is becoming more prevalent nowadays. 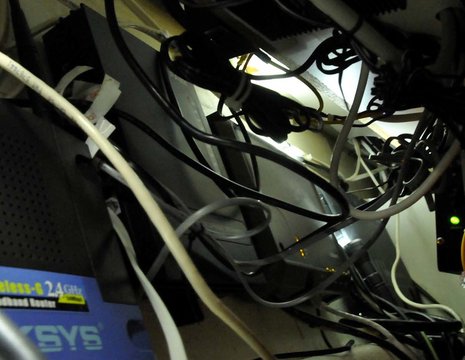 Ultimately, both installs went smoothly with the BDU’s mounted to the hull side below our Nav Desk, now quite full with a wifi network router, phone PABX, Iridium BDU, FB150 BDU as well as a now dormant Globalstar BDU, AIS, & cell phone booster not pictured. Both systems powered up and found satellites without a hitch.

Satellite connections on both units seem to be available most of the time, but both have experienced outages within the last two weeks for an hour or more.

Voice quality is relatively similar between the two units, but FB150 might have an edge – more time will be required to discern any significant (subjective) differences. Overall sound quality is good (similar to a cell phone), and the satellite delay is usually not long enough to interrupt a conversation. Occasionally, the delay becomes great enough and does interfere with conversation, with each person apologizing for walking on the other. Iridium has a bad habit of dropping calls about every 5 to 7 minutes. It doesn’t happen every time, but it happens enough to be frustrating.

Data connections are easy to set up on both systems. KVH adds a step in which you turn on the data connection either on the ip phone or on the web interface. In general, this should be seen as a positive addition, as it makes it a bit easier to control data access. Alternatively, I have each system connected to a different USB network adapter allowing me to shut off each connection to avoid unexpected data charges. The FB150 is certainly a faster data connection (as expected as the OpenPort is limited to 32k), and I plan to explore that difference in the next round of testing in a quantitative manner. So far we are finding that regular connections for light and casual e-mails with 10 to 20 Grib files for weather uses 3 to 4 MB per month. Iridium bills us $13.50/MB or $40.00 to $50.00 per month for data (in addition to a monthly service charge for voice time). We have found this to be reasonably affordable for the convenience it provides.

The Iridium OpenPort system retails for $5800, but has a street price of about $4800. The KVH Fleet Broadband 150 retails for $7500 and has a street price of about $6200, making the real world price difference about $1400 for the hardware. For airtime, we have a contract with our Iridium provider that supplies 100 minutes of voice per month for $73 with no other commitments. Extra voice minutes are billed at $0.73/min and data is billed at $13.50/MB on an a-la-carte basis (limited to 32kbps). Compared to most published fees, this was a bit of a sweetheart deal we got when the unit first came out. The typical OpenPort fee schedule is more like this: 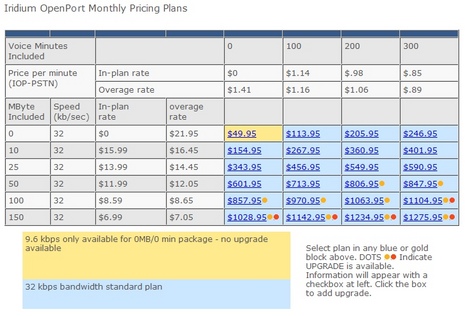 Where a 100min/0MB plan would be $114 and data would bill at $21.95/MB, significantly more expensive than what we pay and what may be available if you do your research. Iridium has been kind enough to offer to reimburse VOJ for some of the more extensive testing we have planned for the next few months, so that will help ease the pain of these moderately expensive megabytes.

The Fleet Broadband 150 has a different sort of billing schedule. If you are on a service plan, voice is effectively billed at 1 MB per 10 minutes of talk time, and then you buy a certain number of MB or voice time equivalent per month. Conveniently, if you sign up for 12 months at a time, you can use those MB at any time during the year, so you don’t have to count your minutes each month. If you only use your boat for part of the year, or spend a month in a place with wifi, you can bank that time and use it throughout the year as needed.

KVH, together with Stratos and Inmarsat, were kind enough to provide Visions of Johanna with 50MB of data to allow us to do our testing. If we were buying time, we could buy a “Season Pass” for $59 per month and get 5 MB of data each month ($11.80/MB or $1.18/min). Their complete package details are as follows:

If you just want to go a-la-carte, data is $13.50/MB and voice is billed at a surcharge of $1.49/min for calls to land lines ($1.89/min to cell phones). Any overages with the monthly plans also bill at the “Season Pass” rates, so it is important to monitor usage if you choose a larger plan. Fortunately, I have found that the web interfaces of both systems make this easy to do.

Plans for future testing include quantitative speed tests, power usage, further qualitative voice comparison, service uptime comparison, and a study of real world data usage. If there are any other specific questions, or tests you would like to see, please leave your suggestions in comments.