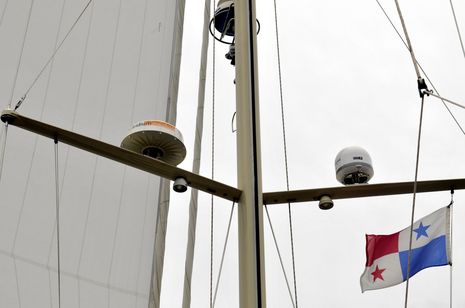 Anyone with an interest in cutting edge satellite communications should get excited about this photo.  You’re seeing the 62′ sloop Visions of Johanna (VOJ) almost all set to compare Iridium OpenPort and KVH Inmarsat FB150 systems in real blue water conditions.  When Bill Strassberg and Gram Schweikert began finalizing plans for The Big Trip from Maine to New Zealand and back, they wanted a voice and Internet system more reliable than the Globalstar set up they’ve used for years, and more powerful than the Iridium handset service I brought along on our Bermuda to Maine passage.  They decided to purchase the OpenPort system themselves, but knowing how able and fair Gram is as an electronics tester, I helped introduce him to KVH, who kindly loaned VOJ the TracPhone 150 above.  Gram just finished the FB install in Panama, where they’re about to transit the canal, and he plans to write up a series of short- and long-term tests as they cruise the Pacific.  You’ll read all about the project here and hopefully in longer articles for Yachting and Cruising World.  In fact, here’s Gram setting the scene:

The dream of surfing the net in exotic ports
around the world is still outside the budget of most cruisers, but this year
several new options have brought us a bit closer.  In a series of articles we will shed light on the two smallest
and most affordable of these new broadband capable satellite communication
systems.
Early this year, Iridium
launched a new phone system called OpenPort, which essentially bundles many individual
Iridium connections together to create a larger pipe. Capable of multiple simultaneous phone calls and always on data
at speeds up to 128 kbps, this new permanently installed Iridium system is
being marketed to commercial shipping as well as us yachties and besides higher
speeds, it brings a new billing system to Iridium where data is charged by the
megabyte (Mb) instead of by the time it takes for your download as it is with
standard Iridium phones.
A few years
ago KVH started offering broadband connections through the Inmarsat system via
their Fleet Broadband systems.  This
summer they launched their newest and smallest Fleet Broadband system, the
TracPhone FB150.  The FB150 brings an
always on internet connection at speeds up to 150 kbps and IP voice connections
to a significantly smaller dome than previously available at only 13″ tall by
13.5″ in diameter.

From what I’ve heard so far about both these systems, I suspect they’ll each provide VOJ an amazing level of communications.  But I’ll sure be interested to hear about the details.  If you too are interested, and may one day purchase a system like this, please speak up.  I say that because, while officials at both Iridium and Inmarsat have expressed interest in supporting this project, I’m not sure either has yet met Gram’s request for a modest amount of air time to try things that aren’t really in VOJ’s cruising budget.
I’m also hoping that Gram will report on some of the other gear he and Bill carefully chose for the Big Trip.  I know, for instance, that they’ve been entering tricky Caribbean anchorages with Gram on the bow with an iPhone running iNavX and charts downloaded via xTraverse (“often the best we can get”).  And when he sent the photo and note above, Gram added: “I am really impressed with our Port Networks wifi
system {which, seen below, I’m impressed with too}.  We picked up someone’s WiFi from probably a mile or more
yesterday, and could see Shelter Bay from at least 2 miles out while
coming into Colon, and this is in a VERY busy port with lots of RF.”  Go VOJ. 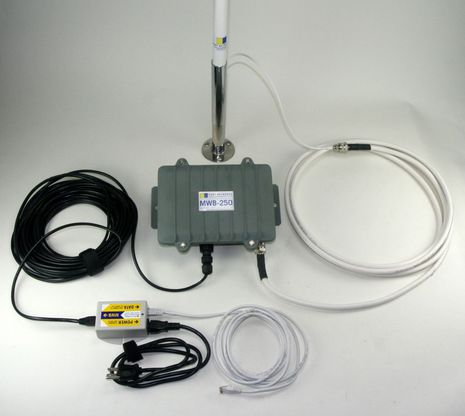