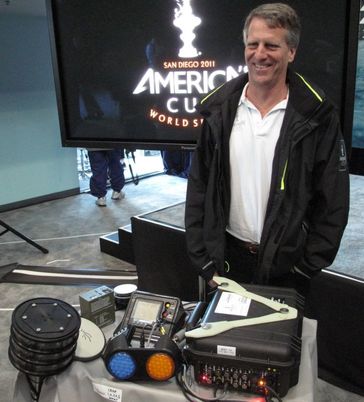 Stan Honey has not always been grinning during the San Diego session of the AC World Series, but it’s staggering what he and the many tech teams behind the scenes have already accomplished. As I had hoped. In fact, while I came mostly to see the technology, I’ve become enthralled by the racing itself, which — almost ironically, and a far cry from previous AC’s — is all about sailing skills rather than competing design and gear technologies. The fleet of AC45 catamarans is nearly pure one design (they have some latitude over the “soft” sail designs) and I understand that the only racing electronics the crews use are GPS speedos. What all the gadgetry and software supports are remarkably agile race management, fast and fair umpiring, and phenomenal audio video broadcast coverage…

If there’s a heart to the multiple systems it might be that light gray NovAtel high precision GPS you can see in Stan’s press conference collection. On the race boats, you’ll see them painted black and mounted at the aft end of the carbon “bumpkins”, and hence on center and right at the boat’s stern. Used with a reference station set up ashore, the NovAtels are accurate to 2 cm — less than an inch! — but added to it in that Pelican case is inertial motion unit (IMU) information accurate to 0.1 degrees of pitch, roll, and heading. So what gets streamed ashore is just every move made by the cats. Which, mind you, weigh only 3,000 pounds while sporting a 70 foot tall, 915 square foot wing mast and sometimes more than a 1,000 square feet of headsail. The AC45’s move easily and quickly!
The mark boats — and all the other vessels in the remarkable support fleet — are also accurately tracked and all this data is sent ashore for processing using familiar Ubiquiti Bullets (though they’re using private channels and tweaked installs). This core data then goes out to the race management and various broadcasting systems, as well as the screen shown below being explained by Director of Umpiring Mike Martin. There are umpires out on the water, some on jet skis (also tracked on that screen), but the calls are made ashore.
In a future entry, I’ll get deeper into the umpiring system, which includes the clever use of those onboard LED signal lights seen above on Stan’s table. I’ve also had a chance to get aboard the committee boat and see how the race manager can modify the marks and boundaries during a race and push the changes instantly to Garmin 7000 MFDs installed on the mark boats. And this afternoon I’ll be in the container farm where the broadcasting teams create the LiveLine overlays and virtual race model, and mix the input of an insane number of microphones and HD cameras.
But I’ll also be paying close attention to today’s match racing finals, which are shaping up to be a battle of crack French and New Zealand sailors. If you can, I highly recommend watching the live coverage on YouTube or TV, link’s at the AC home site.You’ll get a better sense of the racing there than you can on the water next to the course or even from the VIP perch high on the bow the aircraft carrier Midway, though that’s a scene I’ll also try to share. 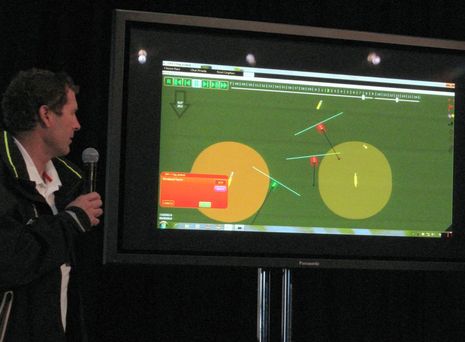