How different are boats, boaters, how we boat, and where we boat? On the very day that Ben Stein despaired about Have Another Day’s South Florida air conditioning addiction, I proudly humped this old Cruisair AC unit off Gizmo with no replacement plan. While I think that not needing AC is a feature of our cold-water marina-free cruising style, the sense of accomplishment actually arose from a challenging extraction process. And that would have been much harder without some particular hand tools that may be useful to a wide variety of boaters. 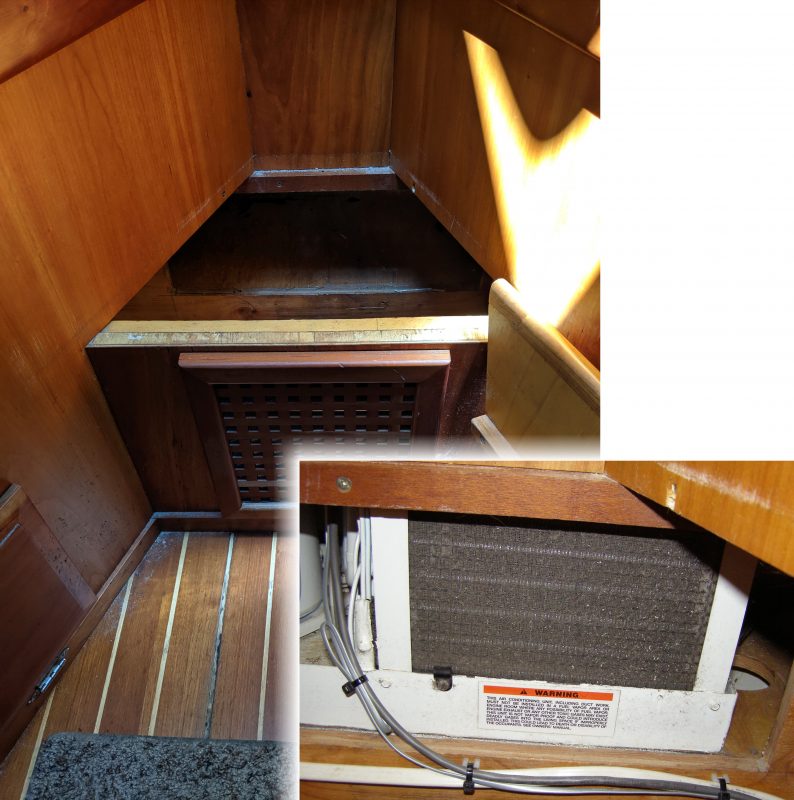 The 12,000 BTU Cruisair was once neatly installed below the vee berth in Gizmo’s bow 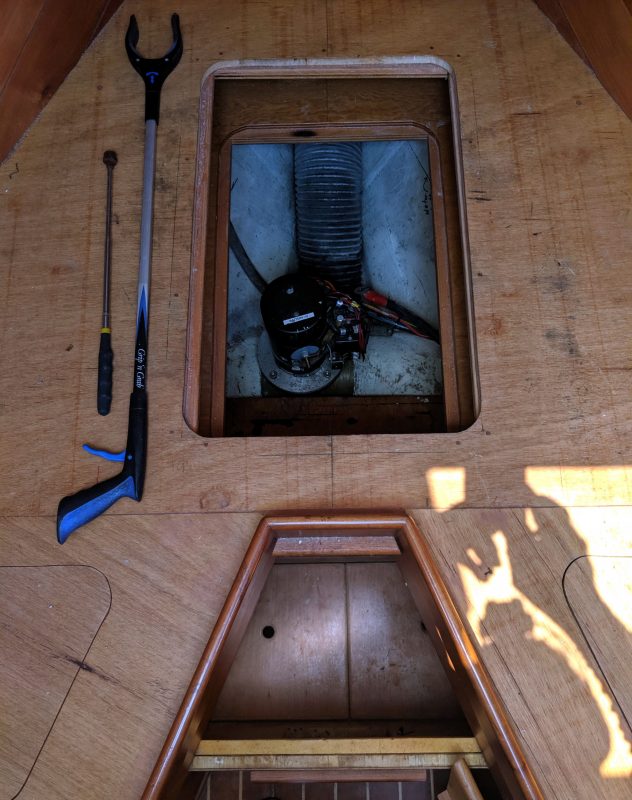 First I’ll explain the problem. I’m fairly sure that the self-contained Cruisair 12,000 BTU SXR12 (data sheet PDF) was installed by Covey Island Boatworks while finishing out Gizmo’s  Duffy 37 hull before her 2000 launch (as the fourth owner it’s hard to be definite, though I’ve acquired install forensic skills). And as I’ve come to expect from those Lunenberg craftsmen, it was neatly fitted deep under the forward vee berth. In fact, the whole unit likely went through those two hatchways visible in the right-hand photo — which also form a sound-deadening chart storage compartment — and was meant to come out that way for repair or replacement.

But at some unknown date, someone substantially blocked the Cruisair exit by installing a Lewmar bow thruster. I greatly appreciate that thruster — and install stuff happens — but how could I remove the AC unit without taking apart the light, strong, and lovely joiner work, or by removing the Lewmar? Well, dissembling the Cruisair in place seemed like it might work, but I didn’t know for sure until it did, and that meant removing all the parts seen in the top photo and also separating the heavy condenser from the base pan (which I reassembled onboard for the move ashore).

The extension magnet and grabber seen at right above were helpful accessories as I often dropped tools and fastenings (and curses) into the bilge while reaching awkwardly, and usually blindly, into the tight AC/thruster compartment. But the critical tool was a somewhat unusual 3.5-inch bit ratchet wrench. The key extraction tool was the little Wera Bit Ratchet included in the Bit Check kit.

Many years ago, looking for help with tight boat work, I splurged on that Wera Zyklop Mini Bit-Check Set with the little ratchet included, and it rapidly climbed high on Gizmo’s most frequently used tool list. And it’s never failed, including the miniature switched ratchet mechanism, though it even has extra fine-pitched teeth so you get more work out of short swing arcs. (As you may know, the ratchet switch is usually the first thing to go with “bargain” level wrenches).

Disassembly of the Cruisair involved lots of little sheet metal screws that I often could not see, even with my head and headlamp in the hole. But with one hand I could feel many out, engage the mini ratchet, and break them free (while two hands and bit extensions worked in other cases). As shown above, I have a set of Tekton nut driver bits with the universal 1/4 inch hex shank that fits the Wera mini ratchet (and many other bit driving tools). The combination, incidentally, is also excellent for hose clamps and many other common boat repair/install tasks.

Come to think of it, the mini ratchet already made Panbo for antenna install heroics. I think that the Wera “Rapidaptor” included in the Bit-Check kit was also my first experience with the quick change bit holders that are now common, and with good reason.  That Wera KK 60 Rapidaptor screwdriver kit is also on my highly used list along with the quick change Milwaukee power driver I favor when there’s room to use it. Also included in the photo is a FireHawk Picquic multidriver because — though bit changes are slower — it has exceptionally good hand feel, has easily survived the Gizmo school of hard knocks, and can also share all the screw bits, nut sockets, and even bit drills a well-tended boat might accumulate.

Note that while some of the bits have shank detents that lock into the quick change mechanisms, the straight shanks still work (though a magnet stick may come in handy). Note too that Milwaukee’s latest M4 cordless driver looks like a possible improvement on the old model that I can’t seem to break, and that there is now a huge variety of Wera Bit-Check kits available —  one indication that I’m not the only one who thinks they’re easily worth the premium pricing.

Now, can I interest anyone in an old but unused-since-2009 Cruisair AC unit? In fact I have two, the other one completely assembled (and working fine) when easily extracted early in my Gizmo stewardship. I’ll bet that there’s a boat (or lake cabin) somewhere that could make good use of them because “different strokes for different folks.”