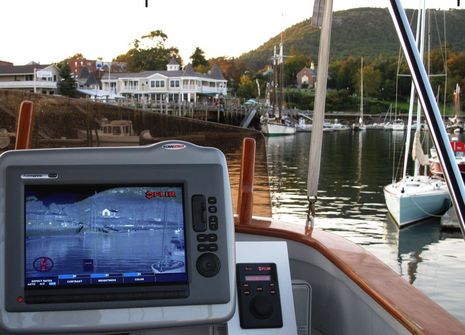 I first saw a working FLIR M-626L thermal camera in Miami last winter, and am keen to try it on my own boat in familiar territory.  Obviously the shot above was taken from my mooring float before the daylight faded completely, but it does hint strongly at what I’ll get at night.  After all, the image seen on the Raymarine C140W above is all about heat, not light. Click on the photo and compare thermal to visible spectrum.  (Note that I added the black marks at top to show the slightly-panned camera’s field of view, and that everything is slightly widened because I used the Ray’s widescreen aspect ratio to fill the screen.)  See how ‘hot’ humans on the docks and even in the distant head-of-harbor park show up clearly, as does the south-facing brick wall of the library and the similarly heat-holding ledges up on Mt. Battie?  When I get a chance to try the FLIR in pitch dark conditions, I hope to see lobster pot buoys — the bane of night running around here — pop out clearly.  In the meantime, here are a couple of neat M-Series installation details…

The M-Series does not deliver video over Ethernet, but it does cleverly use Ethernet to provide a single power and control cable for its Joystick Control Unit(s), aka JCUs.  This FLIR diagram explains a single station install nicely (note: you don’t need to use both video cables, but if you do, you can see the thermal and low light camera images simultaneously, either split screen or on two screens): 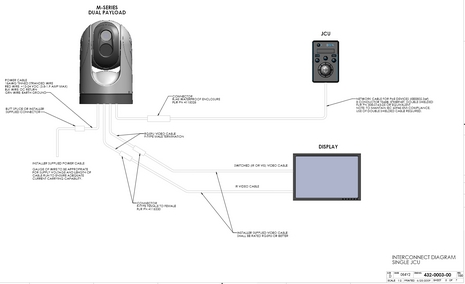 At any rate, to marry the Ethernet cable coming out of the camera to an extension, while leaving the ends easy to snake, FLIR provides the very nicely made waterproof Ethernet splice kit seen below.  I did have to remove the black plug sheaths (one at top) to make everything fit, but was pleased to find that the rubber compression sleeves are so stretchy and strong that I could easily pull them over the Ethernet plugs (this material would be good for the N2K field attachable connector we’ve been discussing).  Once done, this splice felt very solid, and I bet this kit could be useful for many other marine installations, like some Ethernet radars.  FLIR tells me they can sell the kit separately, or maybe a reader knows of another source?  (Ha!  10 minutes after posting, John Gass links to a similar Allied Elec inline connector kit.) 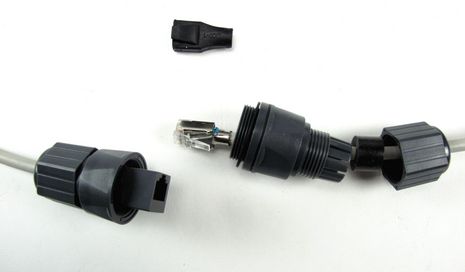 I also liked the “ears” FLIR put on the JCU to make it easy to fasten into a panel.  Below is the backside of the panel seen in the top photo.  The “ear” bottom left is in the hidden position used when you drop the unit into the panel, but as soon as you turn the screw from the outside, the ear swings over to the stop as seen upper right. Keep screwing until all four corners are held down tight.  In other words, you could remove and replace this JCU without getting to the back of the panel, and the ears never need to be separated (and possibly lost). The JCU also has a waterproof Ethernet connector that goes on after you snake the basic plug.  Good stuff. 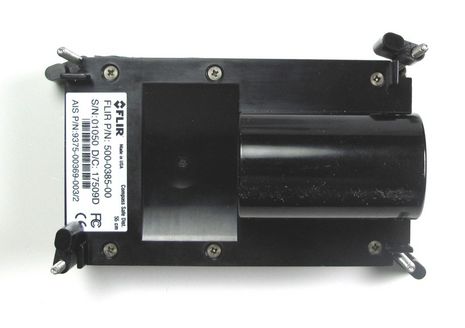