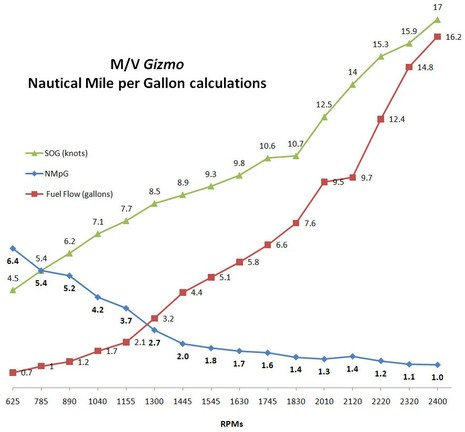 As illustrated above, the fuel cost for cruising Gizmo varies enormously with speed. It’s fortunate that we like poking along at 6 to 8 knots in most conditions because knocking off miles on a 16-17 knot semi-plane is four or five times more expensive. But as suggested by the lumpy lines, those fuel-flow versus boat-speed numbers are not necessarily precise, and since I was only able to collect them on one day, they definitely don’t reflect changes in vessel trim, bottom cleanliness, engine condition, etc. I’d love to have accurate real time fuel flow data flowing around Gizmo’s NMEA 2000 network and thus am excited about Maretron’s FFM100 system, which was recently introduced with bold claims…

According to the press release (PDF here):

Larry Anderson, Maretron VP of sales & marketing, said “the accuracy of the FFM100 is nearly that of commercial vessel systems costing tens of thousands of dollars, yet the FFM100 costs less than existing recreational systems found on the market today.”
Additional benefits of positive displacement metering technology are: elimination of flow conditioning components such as “straighteners” and pulsation dampers, true temperature compensation with embedded temperature sensors, and detection of momentary reverse flow in the fuel lines due to fluctuating pressure caused by the injection pump. 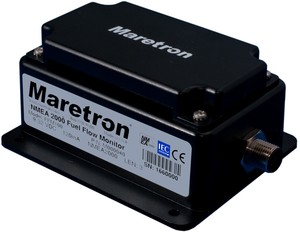 I’d say that’s a shot across the bow of Floscan, which dominates the complicated world of fuel flow monitoring. Unfortunately, I can’t find details on Floscan’s site about the technology it uses to actually measure flow or to compensate for temperature differences between the diesel flowing into and out of an engine, but there’s definitely a calibration process, and I’ve heard mixed reports from boaters with Floscan systems (the negative ones possibly due to poor calibration).
Meanwhile, the Maretron FFM100 manual (PDF here) does a good job of explaining the difficulties of measuring diesel fuel consumption accurately, and purportedly why their MxRSP positive displacement flow sensors with built-in temperature sensors work so well. There are an amazing number of ways to measure fluid flow and Maretron claims a 0.25% accuracy for their sensors though they also explain how that can lead to a worse case 1.75% inaccuracy in a diesel system because typically three times more fuel returns to the tank than is actually burned in the engine. (I never knew the figure was so high, but was not really surprised as I’ve recently learned how fast I can trim Gizmo by taking fuel from one tank and returning it to the other). 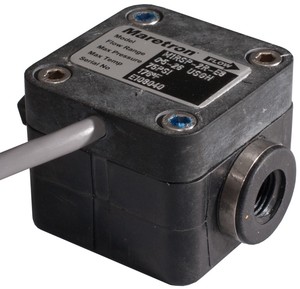 And mind you that accurate fuel flow measurement may be of interest even to skippers with modern diesels that claim to report it. We had a long discussion about this last year, and I came away pretty much convinced that no diesel actually measures the fuel it burns, though some are very good at internally estimating the burn based on engine load and other factors. Bill Parletore ended that conversation with some valuable research he’d done, and I was pleased to find that his eventual Passage Maker article on the subject can be read online. You’ll find that he highly recommends checking fuel flow “totalizers” — a common feature that keeps track of gallons used — against actual fuel pumped into your tanks in order to at least refine your sense of accuracy if not improve calibration. It will be interesting to see how Maretron’s system does in real world tests like this.
At least the issue of calculating fuel flow info with boat speed to get the all important miles-per-gallon figures has been solved nicely using NMEA 2000, as I saw years ago (1-Garmin, 2-FloScan, 3-Raymarine, 4-Maretron, 5-SmartCraft, and 6-Lowrance), and is even truer today. And let’s note that FloScan led the way in bringing mechanical flow measurement to N2K, and has now had a lot of experience with it. I also noted today that the company has introduced new DataLog software for deep fuel management analysis. I wouldn’t be surprised to see screens like the ones below in Maretron’s N2K View, and I wonder what FloScan thinks of positive displacement sensors. 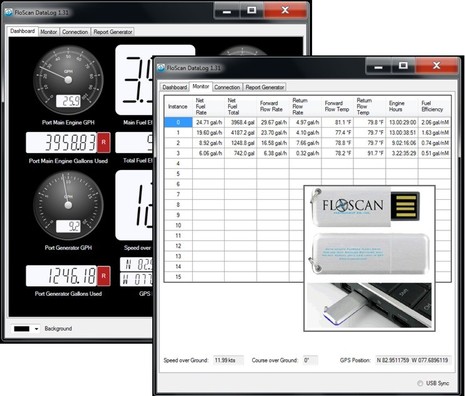