Nebo’s view of the eastern U.S. The boat named “My Boat” isn’t my boat.

Not long ago while talking to another boater he mentioned something about finding another boater on Nebo.  At first I thought he misspoke, but then he repeated the name three or four times.  Now I was curious so I grabbed my phone and searched the app store.  What I found was pretty impressive… think one part Marine Traffic and one part social network.

Nebo is a free app available in both the iOS and Android app stores, and its tagline — “Log. Connect. Share the journey” — does a pretty good job of capturing the core functionality.  It offers strong trip logging, messaging and social networking features aimed at boaters.  Successful social networking takes a lot users and, as seen above, there aren’t many in the U.S. yet. But Nebo’s Managing Director Stephen Winter says they already have about 18,000 vessels registered worldwide and I know that many current Loopers are using it, details below after a hands-on Nebo tour. 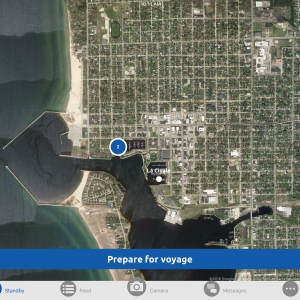 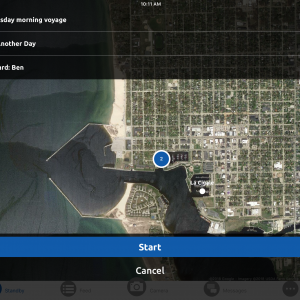 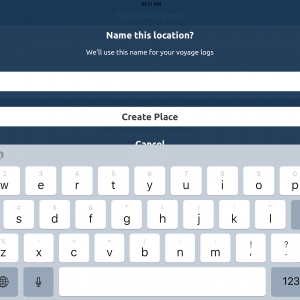 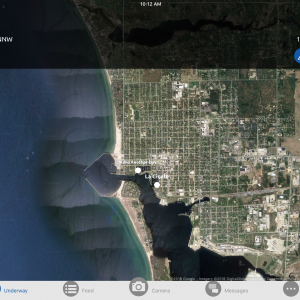 Tracking has begun, summary statistics are displayed and your track will be built on the map

Nebo attempts to make voyage tracking as easy as possible with a few quick questions.  If Nebo doesn’t recognize your starting location it will ask you to name it.   When tracking a voyage Nebo uses their global geofenced library to determine when a vessel leaves one area and arrives in another.  Currently they have constructed this library with extensive coverage of Australia, their home market, Florida and the Mediterranean.  I’ve been using it on the Great Lakes.  While I haven’t been able to take advantage of the geofence library, the tracking still works well, but without some of the pretty names and awareness of geographic landmarks.

The biggest challenge I’ve encountered while using Nebo is remembering to start it when I begin my voyage and end it when I’m done.  A problem I’ve had with other tracking functions as well, though as I’ve used them longer I’ve built them into my routines.  Nebo has a feature where once it notices you’ve stopped moving it asks if your voyage is over and tracking should be shut off.  It’s harder for Nebo to figure out when your trip starts.  Stephen Winter says they are currently evaluating relatively inexpensive hardware that could be installed on the boat solely for the purpose of transmitting tracking data.  Nebo is also evaluating working with existing hardware like FloatHub and building off their ability to send data to AIS tracking services. 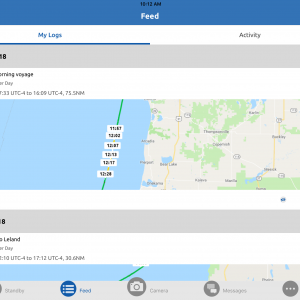 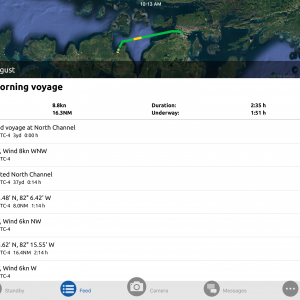 Nebo’s logging is found under the “Feed” section of the application.  The “My Logs” tab displays a list of your trips with a snippet of the section displayed.  Clicking on one of those trips brings up a detailed log with trip summary statistics, individual segment info and weather conditions during the trip.  The lack of geofence library information can be seen in the second screenshot above where latitude and longitude are displayed rather than place names because Nebo doesn’t have that information. 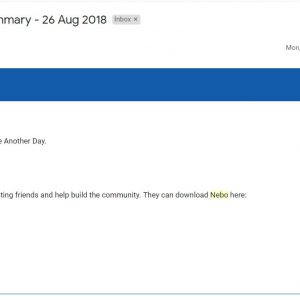 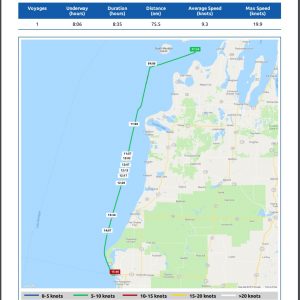 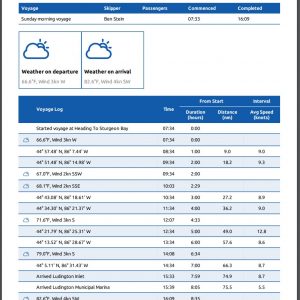 Each day after you’ve logged a voyage an email is sent with summary information about your voyage as well as weather and detailed information about each leg of the trip.  I already use Aqua Map, Navionics Boating HD, and the track function on my MFD to keep track of my trips, but none deliver as clear and easy to read summaries Nemo. 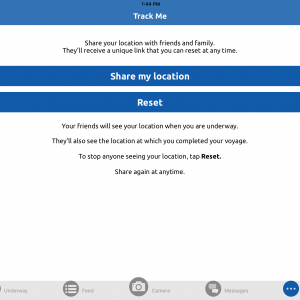 You can share your journey with anyone, even if they aren’t using Nebo 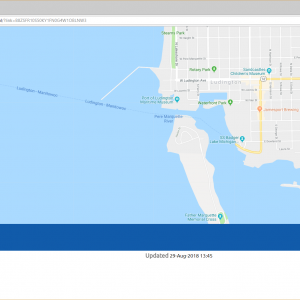 While tracking a voyage you also have the ability to allow a non-Nebo user to follow your voyage.   In the “Other” menu under the “Track Me” option you can use the “Share my location” button to send an email, text, Facebook message, etc. to friends so they can watch your voyage. 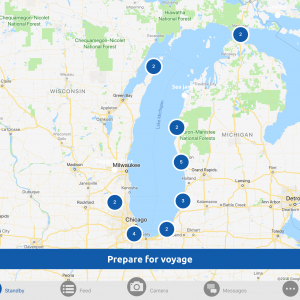 Zoomed out view of all vessels on Lake Michigan 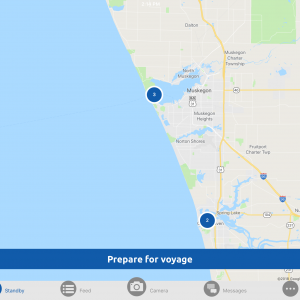 Zommed in to just see Muskegon and Grand Haven 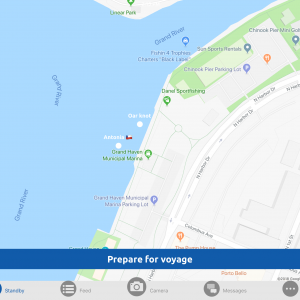 Zoomed in even further to just Grand Haven 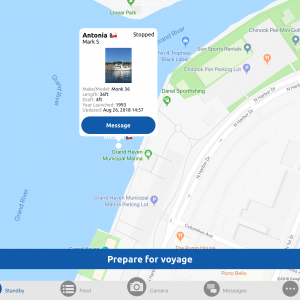 One of my favorite capabilities is seeing all the boats around me.  When you zoom out to cover a large area, vessels relatively close together are grouped as a single blue circle with a number showing the total vessels in that area.  Above, the first image shows all of Lake Michigan and the boats on the lake.  I then zoomed into the Muskegon and Grand Haven area on the east side of the lake towards the middle (shown with a 5 in the first image).  That zoomed in view is what’s shown in the second image; here you can see three of the boats are in Muskegon and two are in Grand Haven.  Further zooming into Grand Haven, as I’ve done in the third image, shows the individual vessels in Grand Haven.  Lastly, clicking on a boat as I did in the fourth image, brings up information about the boat and a picture of the boat if the user has provided one.  From what I’ve observed, Nebo displays all vessels it knows about; not just the vessels with which you’re friends. 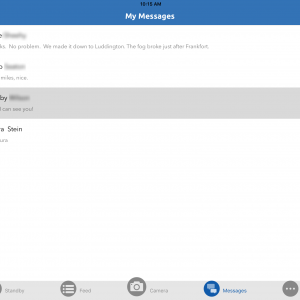 My messages within Nebo 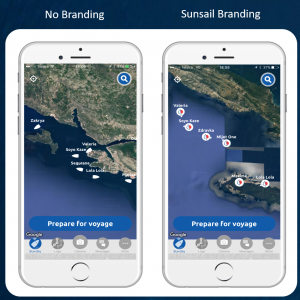 I’m a member of the America’s Great Loop Cruising Association (AGLCA) and that boater I talked about up top is also an AGLCA member.  Loopers, as boaters on the loop are referred to, frequently meet up with other loopers along the way.  Nebo’s ability to quickly show vessels around you is really helpful in finding others in an organization or group.  Nebo has found strong adoption among loopers.  I’ve found this very helpful, as it has meant most of the time when I spot an AGLCA burgee on the bow of a boat I’m able to find them in Nebo.  Friend functionality is built in where you can add other boaters you know are using Nebo or invite contacts to begin using Nebo.  Once added as a friend you will be able to see your friend’s activity appear in the activity feed area as well as being able to message them from the “My Messages” section.  Nebo is already working with Sunsail’s charter fleet in the Mediterranean.   Currently, there’s no functionality to automatically add members of a group, verify membership, or otherwise interact with the memberships of Yacht Clubs, Cruising Clubs, and other organizations but Nebo is working on developing those capabilities. 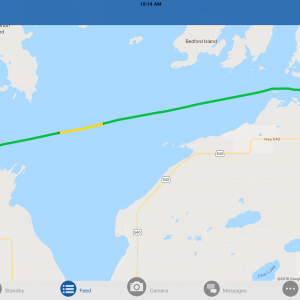 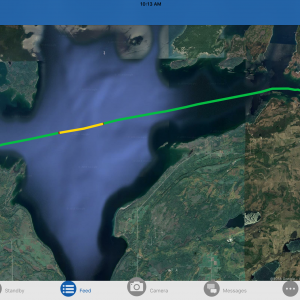 Satellite view, but no labels

The two screenshots above show the two mapping options.  Those are Google Maps with cities, towns, and roads appearing or satellite view with no labels at all.  I’d like to see an option for the satellite view to have some labels present as well as marine cartography.

I’m also concerned that Nebo overlaps with some of the AIS tracking services out there and serves to provide one more app to check to find the boats around you.  If a boat has AIS on board but isn’t using Nebo you would find their position on AISHub or Marine Traffic.  If a boat doesn’t have AIS but is using Nebo you would find their position on Nebo.  Nebo is considering a premium version and perhaps that would offer the ability to overlay AIS data from one of the AIS tracking services.  With AIS data available in Nebo, the user would be able to see both Nebo tracked vessels and vessels tracked via AIS on a single screen.   On the flip side, perhaps Nebo could send updates to those tracking services.  Marine Traffic currently supports something similar via their own OnCourse app.

Nebo presents information in a clear and easy to understand format.  The overall experience is clean, the user interface is intuitive, and it makes figuring out where other boats are pretty painless.  Like any social service, the trick is in getting people to use it.  Nebo’s usefulness goes up dramatically if more boaters are using it.  I’m hopeful Nebo’s adoption will increase over time and that Nebo can find ways to integrate with other sources of data to get as many vessels as possible covered in one app.