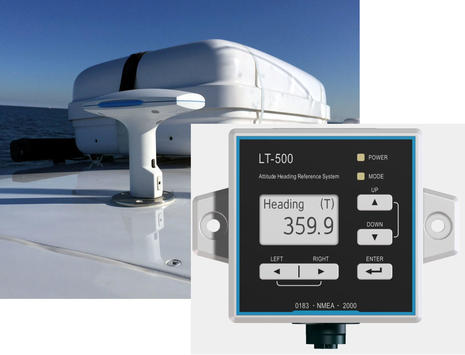 Today I’ve got a smorgasbord of new gear to share, starting with a trio of serious multi-sensors from Lars Thrane A/S in Denmark. The company first came to my attention when they inquired about advertising — thanks, LT — but a little research revealed why their products may well appeal to Panbo readers. The LT-500 AHRS in the foreground is an 11-sensor Heading, Roll, Pitch, Air Pressure and Temperature device; the LT-300 GNSS not shown is a 72-channel GPS/GLONASS/BeiDou receiver; and the LT-1000 Navigation Reference Unit (NRU) shown installed essentially combines the two. Common to all of the current Lars Thrane products is promised high precision, reasonable pricing, simultaneous NMEA 0183 and 2000 output, and an impressive attention to the real boat details involved in installation, calibration, and future proofing… 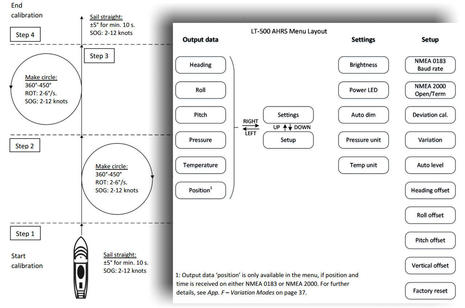 For instance, while it’s common for heading devices to offer automated Deviation calibration when you run the boat through a manuever like the one diagrammed at left above, the Lars Thrane version looks particularly easy and the engineers went one smart little step further: Until an LT-500 or an LT-1000 is calibrated the Heading output (True or Magnetic) is limited to 5 degree resolution and thus it should be obvious if you need to do a calibration maneuver and then if you did it correctly.

For further configuration, the LT-500 has a button and screen interface — its menu layout shown above right — that’s unique for a compass, I’m pretty sure. The LT-1000 has a simpler interface more appropriate to its usual install location, but, then again, I don’t know of any similar device that lets an installer change NMEA 2000 backbone termination mode and/or NMEA 0183 baud rate with dip switches and also shows status lights. Moreover, all three Lars Thrane products can be configured even deeper and updated using a free PC software tool that communicates to the device via the serial 0183 port. 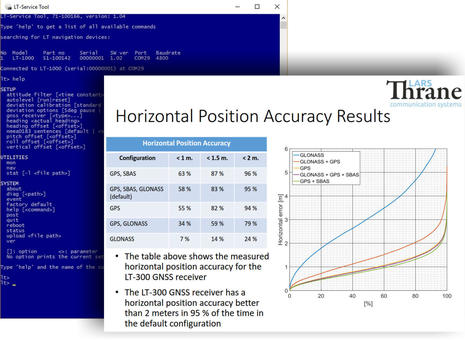 The LT Service Tool software is shown at left above, and though it’s almost DOS-like, I’ll bet that some pro installers and/or DIY boaters who’ve struggled with third party electronic compasses will find it beautiful. Airmar and Maretron, for instance, make good combo NMEA 0183/2000 heading devices — a sign of how many boats need both — but I’m not sure that either offers this level of configuration and flexibility, and they definitely need additional hardware like an N2K gateway or display for any manual configuration, let alone firmware updating. That’s why I think that the LT-1000, which comes complete with a 10m cable and a field installable N2K connector, is reasonable at about $850 retail.

While I may get to test an LT-1000 or 500, the specs already look impressive. Static Heading, Roll, and Pitch, for instance, are all claimed accurate to “<0.5°” (with Rate of Turn at “<1°/s” and dynamic Heading at “<1.5°”). And while Lars Thrane A/S is a new and small company, their boast about putting 40 years of experience into their products seems fully justified. In fact, the company could be called Thrane, Thrane & Thrane, and this profile of the patriarch suggests significant ambitions, as does their partnership with Iridium. 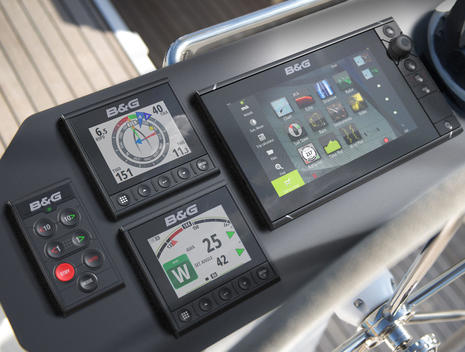 I might have noted that while sensor specialists like Lars Thrane have much to offer, I think, they are also challenged by the big brands that can integrate what are often middling sensors with very sexy screens. But B&G made that point well when the Triton2 Instrument suddenly appeared online this morning. It’s not really a surprise as the hardware seems the same as the Simrad IS42, but B&G has added attractive SailSteer, Wind Plot, and AP-by-wind-angle screens (and maybe more). This video shows them well.

The Triton2 can be paired with the Triton2 Autopilot Controller (like the Simrad OP12), and thus you get the bright, clean, low-profile glass bridge look in a full AP head that’s usefully divided into two parts. I’ve been long testing the original Triton and AP keypad for years now, and while all the majors now have good remotes that usually include some AP control, I think there should be more dedicated autopilot pads like this. 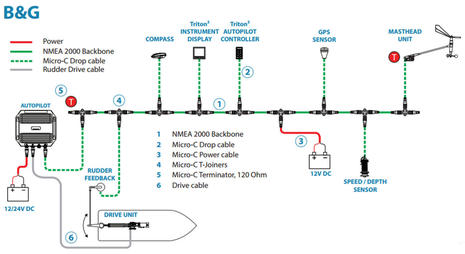 It’s interesting that B&G calls out NMEA 2000 certification as a T2 feature, and the point is evident in this system wiring example from the install manual. The orginal Triton gear on Gizmo is working fine with SimNet to Micro-C adaptor cables but now Micro-C — also known as DeviceNet, and the N2K standard — is everywhere, apparently including the Triton2 sensors. That’s good news — the alternate N2K cabling schemes caused confusion — but the Triton2 also lacks a second port for daisychaining, which might make fitting several into a tight pod harder. I’m not sure that the NMEA should have prevailed in that regard (as discussed here).

It’s also worth noting that in the system above sensor configuration is going to be easy, maybe even graphically slick, via the instrument display. But a firmware update to add new features or fix bugs is , and I believe that’s true of Furuno and Raymarine instrument and autopilot systems as well (unless they too offer something like Garmin’s N2K Updater). {Correction: I learned from reader comments and from B&G that the Triton2 — and the Simrad IS42 — solves this issue neatly with a USB port that allows updates of its firmware as well other B&G devices on the NMEA 2000 network.} That’s more evidence of how clever Lars Thrane’s old school serial connection seems at this point in marine electronics evolution. And while I’m confident that an LT sensor would feed the Triton2 displays well, it can’t update one. The conundrums!

I spotted the Triton2 amongst the new boats and products vying for a Newport Boat Show award, and I figure that one possible winner is the Maine Cat 38. Admittedly I’m a longtime fan of what is possibly Maine’s most unusual boatbuilder, and almost purchased a P-47 power cat. But I got to see the first 38 debut at the Maine Boats, Homes & Harbors Show and suspect that it’s a major improvement on the company’s already beloved 30 and 41 foot sailing cats. Note, for instance, the significant tuck in the hulls, which is how MC founder, owner, designer and chief bottle washer Dick Vermeulen managed to combine the narrow 12:1 length-to-beam ratio that can make a cat really perform with an interior that feels remarkably spacious. 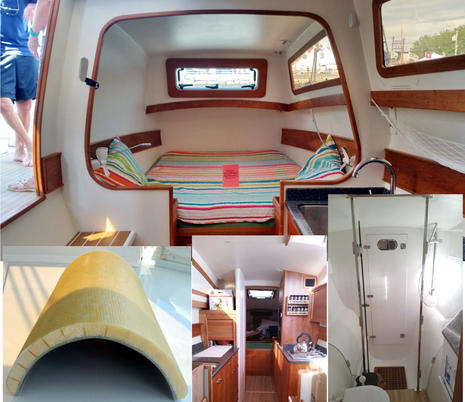 Of course, there are a lot more details like window placement and berth height that make this cat seem particularly livable. And, yes, that is one of the coolest showers I’ve seen on any boat this size, and Maine Cat did dare to build a cat with only one head space (as Charlie Doane enthusiastically noted). But it also takes light construction to float a good accommodation on an efficiently skinny wet surface, and the lower left sample shows how MC is thermoforming Core-Cell to achieve excellent strength to weight. The 38 seemed like a really solid boat, especially given a complete package price currently under $400,000.

I failed to get a good photo of the 38’s immense semi-enclosed main deck and helm, but when I wondered to Dick if this might make a good power cat, he just grinned and pointed at that prototype rendering below. What I didn’t add is how perfect the 38 seems for electric power, specifically a Torqeedo Deep Blue Hybrid integrated propulsion and house power system once that’s evolved to work with the Torqeedo outboards that could replace the gasoline ones that are the 38’s worst feature, in my opinion. Picture fairly quick, nearly silent and redundant electric performance with backup generators and nearly infinite power for the appliances and gadgetry that could make this boat even more comfy (as long as you kept them light). It’s just a thought, but one of many reasons to check out the first MC 38 in Newport next week (or even get aboard for a leg to the Bahamas). 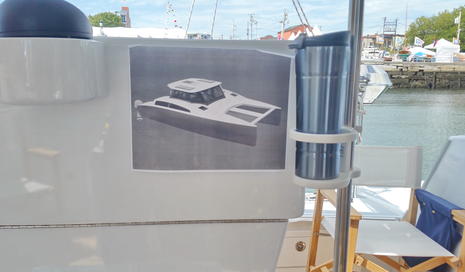