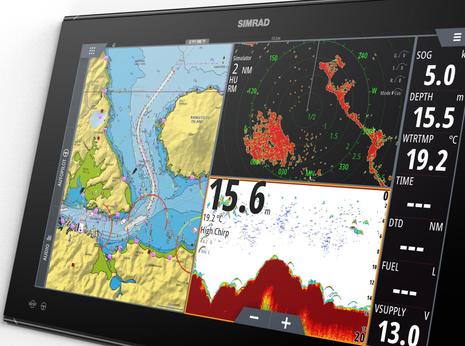 That new 24-inch Simrad NSO evo3 screen must look spectacular with its 1920 x 1080 pixel resolution, 1200 nits of brightness, and IPS-style wide viewing angles. And these big screens — there will be 16- and 19-inch models too — can purportedly be viewed with polarized sunglasses, thanks to the use of combined LCD and polarizer. The new NSO design is also packed with connectivity, including a Simrad-first J1939 engine input, and a black box processor is no longer needed. We’ve got details on the series, and then let’s ponder recent Navico acquisitions… 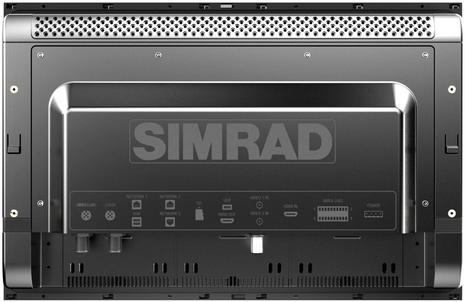 Following the industry trend away from separate black box systems, Simrad has eliminated the NSO evo2 box and integrated all electronics into the displays. While possibly simplifying installation and minimizing space requirements, this change also means an upgrade or repair will require replacing the entire unit.

Now as a high-end MFD, the NSO evo3 display is loaded with inputs and outputs. These include 3 ethernet ports, NMEA 2000, HDMI input, 2 composite video inputs, HDMI output, WiFi, and Bluetooth. Note, too, the 3 USB ports, which can currently be used for keyboard, mouse and mass-storage connections, according to Simrad, and obviously enable future features and functions. But the new NSOs are also the only high-end MFDS without the ability to support IP-cameras, though Simrad says that’s coming.

HDMI input means the NSO evo3s can display content from an entertainment system or PC, and Simrad says they are working on a way to send touch input from the NSO evo3 to a connected PC, possibly another use for those 3 USB ports. New with the evo3 generation of products is a J1939 input. Simrad joins Garmin’s 8400/8600 line in allowing engine data to be integrated for compatible J1939 engines without the need for a J1939 to NMEA 2000 gateway. 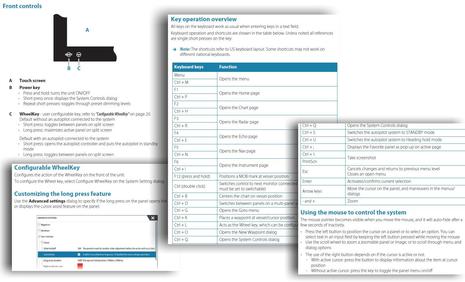 The new NSOs have the user configurable WheelKey first introduced on the NSS evo3. If there’s a Simrad autopilot connected to the system, this key will bring up its controls by default. Alternatively, the WheelKey can be set for two custom actions, one for a short press and another for long press (as shown above). Another interesting detail you can find in the NSO evo3 Operator Manual is the table above that shows all the keyboard shortcuts available when one is connected via USB. It’s easy to see the value of instantly being able to pull up a screen or type a waypoint name (if your helm can accomodate a full keyboard) and mouse clicking a route is another attractive possibility. 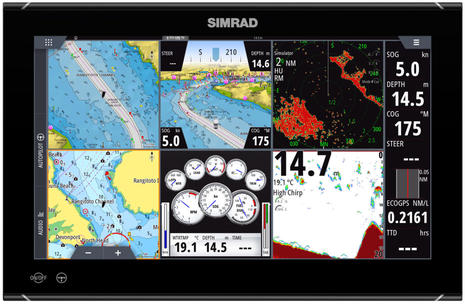 The NSO evo3 displays will run the same HEROiC OS seen on the NSS evo3, but with the added feature of six possible windows on a single screen (also now possible on Garmin 8400 and 8600 MFDs). With the overlap of 16″ units in both the NSS and NSO evo3 series, I asked Simrad about the difference between the two lines. The company explained that the NSO evo3 has higher spec processors and more I/O options. And this series is expected to be installed on larger boats with larger networks of related components like black box sonars, multiple radars, and so forth.

Simrad hopes to begin shipping the $6,999 NSO16 in late January or early February with the 19- and 24-inch models shipping in March. GPS receivers (and sonar processing) aren’t built into these MFDs, but optional kits include the GPS, a panel mount card reader, a NMEA 2000 starter kit, and an OP50 remote controller along with the MFD.

Incidentally, Simrad is more specific about the NSO evo3 processor — an iMX6 quad-core — than I’ve ever seen in marine electronics. Is this simply a response to Raymarine’s Axiom announcement in which much attention was given to its unnamed quad-core processors? Is it an industry trend that some consumers will appreciate? 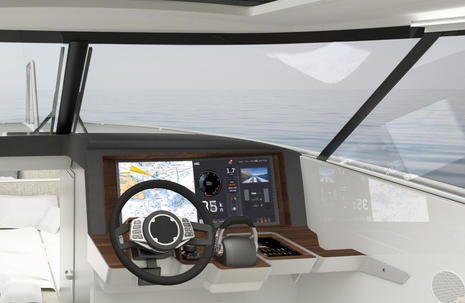 Navico recently acquired an interesting Swedish yacht systems integration company called Yacht Defined along with an interest in HOC Yachts, which is already using a strikingly modern looking navigation and control interface that earned Yacht Defined a Red Dot design award. And it’s not just the super-wide, 29-inch screen seen on the 33-foot HOC Explorer above (and below); the tablet and the wheel keypads seem to work seamlessly with the big screen to control just about everything. Glimpses of the system’s abilites can be seen in HOC videos like this and this (and here’s hoping that we can soon link to an impressive Yacht Defined demo video).

So while the underlying technologies are not clear — Android is hinted at, and some sort of digital switching is obvious — the small and young Yacht Defined team seem to have developed the sort of central boat hub that has long been dreamed of but rarely achieved. A year ago Panbo discussed Navico’s “Full boat integration in one display cluster” concept, and the HOC system seems quite close, except without Navico MFDs at its core.

So will NSS/NSO evo4 or 5 look like Yacht Defined. The problem is clear; anyone who owns more than a small boat — even a new and high quality one — likely knows the mishmash of screens and control panels that seem to cry out for more integration and simplification. A big challenge is getting control of all the possible systems, not just what goes into one small line of medium size powerboats. Only time will tell, but maybe Navico acquired a significant piece of the puzzle?

But perhaps most interesting is Embark’s well-developed crowdsourced cruising guide feature, plus its ability to track and share your location with boating friends. Will good crowdsourced information capabilities make C-Map supported systems like Navico’s and Raymarine’s a viable competitor to Garmin’s ActiveCaptain? And if so, will different crowdsourcing from different brands mean we’re in for messy fragmentation in the whole concept? 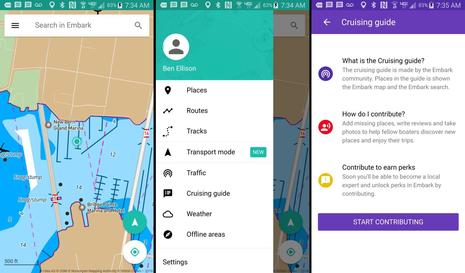 Panbo editors Ben Ellison and Ben Stein usually create their own Panbo entries, but sometimes we write together.