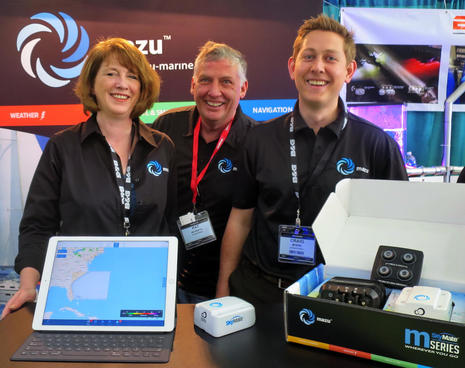 It was good to see SkyMate return to the Miami Boat Show after years focused on commercial fishing, and the company clearly has not lost its touch at squeezing lots of easy utility out of skinny-band satellite communications. Its new Mazu/mSeries marine system promises surprisingly full-featured weather and email using Iridium’s least expensive service, plus texting, SOS, navigation and (optional) off-boat monitoring. And, just around the corner in the Si-Tex booth, I saw a very interesting Android-based touchscreen NavStar MFD nicely interfacing with SkyMate’s existing communications system…

Panbo first mentioned SkyMate in 2004, before I even got here, and in this 2007 “Connected Cruising” PMY article I discussed an ambitious low-cost cellular/satellite project the by-then well-respected SkyMate was working on. That didn’t happen, maybe because the boating world recession did, and so did some problems with the Orbcom satellite service that SkyMate originally used. Nonetheless, SkyMate’s basic tracking and messaging worked well for mandated VMS services, it was acquired by a company with deep engineering resources, and eventually they switched to Iridium’s faster and more reliable Small Burst Data (SBD) technology.

While you can peruse SkyMate’s existing systems here, the recreational marine link will take you to a new Mazu-Marine.com site and the very modern system diagram above. Mazu is specifically the name of the iPad app that lets you manage the whole mSeries hardware system, and also lets users transition smoothly back and forth from the broadband Internet connection they’ll likely have on land, or near it, to the thin data dribble possible with the Iridium 9602 SBD modem fitted into the compact (5-inch) mSeries antenna module (including a GPS receiver).

Iridium SBD tech is highly proven, especially for me after years of experience with various models of the handheld DeLorme inReach. (I’m now testing the Garmin inReach Explorer+ on the island of St Lucia, check our explorations including some crazy 4WD driving here.) So I’m quite confident that the SkyMate mSeries with its dedicated antenna module mounted as designed with a good sky view is going to provide excellent Iridium SBD service anywhere on the planet. Which is good, because SkyMate is doing things with SBD I didn’t even realize possible. 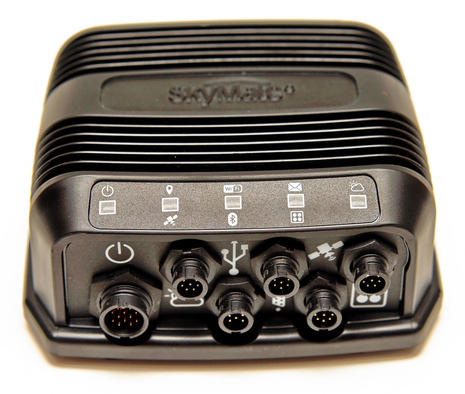 The ISI-2000 is the black box heart of the mSeries hardware system, and, boy, is it connected! In fact, many of those ports above are “future proofing” that, while intriguing, are not useful yet. So let’s first look at what will come with the $995 mSeries package planned to ship soon. On the far right is the cable port that powers and communicates with the four-button LED illuminated keypad that lets you quickly fire off a distress alert to the global GEOS Alliance, see that messages are waiting, or arm/disarm the monitoring option. Then there’s the single cable connection to the antenna module, which is actually Ethernet with POE, meaning that there is no coax signal loss and that extensions beyond the included 10m cable are painless.

Attaching to the big port at far left is a cable for 12 or 24v power (4 Watts normal draw) and also for the Sentry monitoring option detailed below. The ISI-2000 also has a built-in WiFi access point and that’s how you connect the iPad. So the Bluetooth wireless is there for possible future wireless Sentry sensors and there are also ports for an additional weather source (Sirius/XM perhaps?), USB, and CANbus (NMEA 2000?). Even without the future possibilities, this Iridium SBD system integrates more tightly with a boat than the inReach handheld or any other SBD device I can think of. 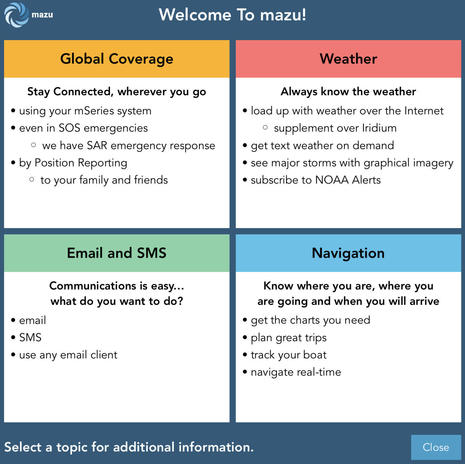 Perhaps the best way to understand SkyMate’s new system, if you have an iPad, is to install Mazu Marine and poke around. The app also has a pretty good System Tour starting with the top menu above (look under Settings/General). It’s an impressive feature array that gets more so as you dig down, I think. (I won’t detail the feature below, but, yes, you can plan routes anywhere on your iPad and use them with mSeries GPS underway, NOAA charts included if you’re in U.S. waters.) 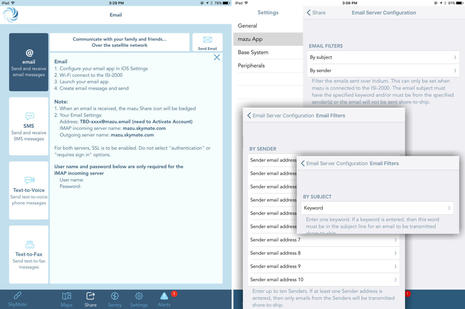 Mazu email, for instance, is designed to work like normal email even though what’s possible via Iridium SBD is quite limited. You do have to set up your Mazu address in your regular email app, but then your conversations will be where you expect them and broadband goodies like big photo attachments will work fine when your iPad is fully online. Also, Mazu’s three other communications methods — SMS to phone, text to (synthesized) voice, and text to fax — also work through your regular email account (and SkyMate’s talented server).

Meanwhile texts to your Mazu “phone” number will get to you fine via Iridium (or regular Internet) and so will emails as long as the sender knows your limits. You set maximum incoming email size in KB and can also set up email subject keywords or allowed sender lists to further filter what gets charged to your Mazu Iridium connection plan. Incoming messages are noted in the app and on the keypad, but again you use your regular email to view and reply. This is a significant contrast to inReach (and similar Iridium messaging), where I can send a text to your email address, but you have to follow a link to a Garmin site to reply and that conversation only lives inside the inReach app, handheld, and website world. 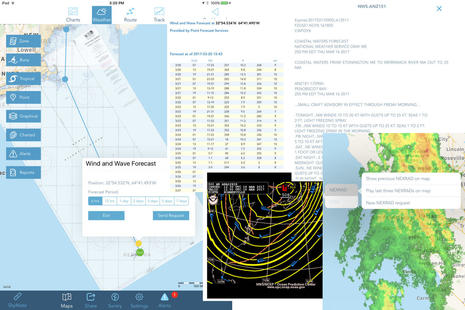 Mazu weather is similar. While inReach can now pack a fair bit of weather forecast into a few short data bursts (details here), Mazu goes a whole lot further, including NOAA resources like graphic analysis, automatic alerts, and NEXRAD radar. You can try all this in the app without mSeries hardware, though you can’t see how many KB of data would be used over Iridium or how long it takes for the ISI-2000 to assemble the bursts into, say, that wet image of the West Coast.

Note how Mazu only lets you download one NEXRAD image at a time, but you can animate the last three downloads. In other words, this weather service doesn’t expect the data volume possible with, say, PredictWind via Iridium GO, but, then again, I don’t know of any easy all-in-one packages based on the GO or the similar Globalstar Sat-Fi (lots of GMN info here). 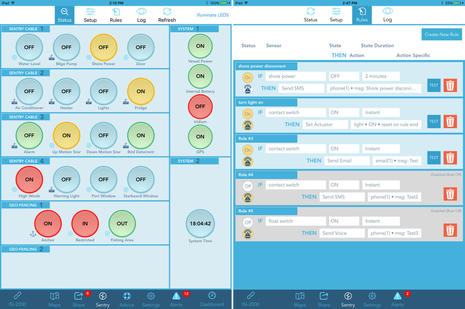 In my view, the cherry on the Mazu/mSeries parfait is the optional Sentry monitoring, which should let a user keep an eye on their boat anywhere in the world, whether they’re just dining ashore nearby (with WiFi or cell service) or they’ve left the dear vessel for months at a time. The $199 Sentry kit will include a water level sensor, a shore power sensor, a contact sensor (typically for a door), a tactile sensor (button under anything), and a DC actuator, but the 16 channels can purportedly be set up for all sorts of sensors and relays.

Sentry, which does necessitate an added-service plan, also unlocks geofencing, an anchor alarm, and Mazu pages like the ones seen above (which I got from SkyMate as they are not available in the app without activation). Note the nifty rules-based alerting and alarming, like “If shore power is disconnected for 2 minutes, then send an SMS text message saying Shore power disconnected to the number xxx-xxx-xxxx.” I’m pretty sure that it would be easy to set up a loud siren so that you’d learn about anchor dragging or high bilge water in your berth like you would ashore (similar to the on and off board beauty of Nautic Alert).

I’m looking forward to testing the Mazu/mSeries system soon, and what I’ll be hoping to experience is a useful array of reliable cruising communications that will be exceptionally easy to learn and use. 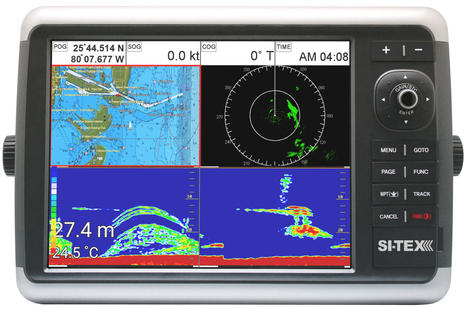 Now let’s look at the new Si-Tex NavStar multifunction display series, which are nicely detailed in this Miami booth video. As Si-Tex VP Allen Schneider makes clear in his demo, this MFD is running Android with full touchscreen and browser capability as well as WiFi and Bluetooth. So while there’s Ethernet, NMEA 2000 and 0183, and dual-range radar and multiple sonar sources are planned, the NavStar can also work with a Bluetooth keyboard and/or integrate fully with the existing SkyMate system. 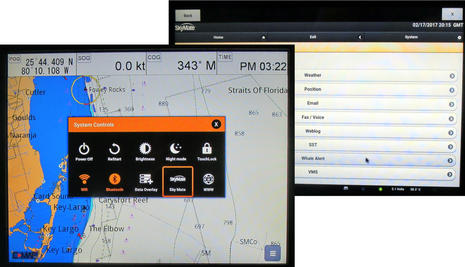 Actually, I did not realize at first that the SkyMate interface I saw working on the NavStar was not Mazu because the functions seemed quite similar. But while the SkyMate ISeries is feature rich and well proven, it doesn’t have all the future proofing built into the mSeries, nor the Sentry option, and its user interface is browser-based, not a dedicated iOS app.

Maybe the mSeries hardware will eventually get an Android app, or a browser interface – I don’t know. But what the NavStar can do right now is still quite appealing and unique for a full-featured 12-inch MFD retailing for about $2,700 (there will also be a 10-inch version available when the NavStars ship next month, and a 15-inch is planned). Note, also, the Sport Fishing service. The overall SkyMate Iridium services may also hint at what Garmin will come up with as they fully integrate all the assets they acquired with the DeLorme purchase, or what Simrad and B&G may offer as GoFree Vessel and Track evolve.

Easy-to-use is key these days, especially in areas as complex under the hood as skinny satellite communications. So it was neat when Allen Schneider quickly sent me an email from the demo NavStar, which could have been installed on a helm pedestal way offshore, and a minute or so later my reply lit up his SkyMate keypad below. Perhaps even neater, but much harder to test, is the GEOS response possible if you hold down those two SOS buttons. I once described the GEOS rescue center in Texas, and a lot of SPOT and inReach rescues have been handled since, many of which made use of Iridium’s two-way messaging. In fact, Steve Mitchell fully documented more than a test, and I’ll write up some boating examples soon. 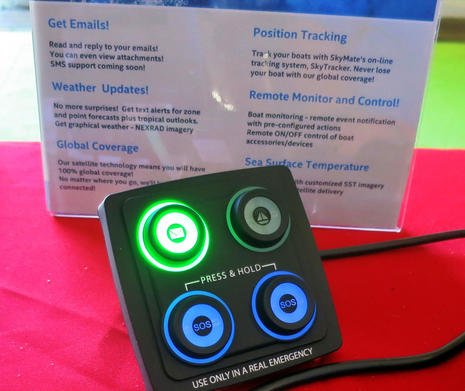