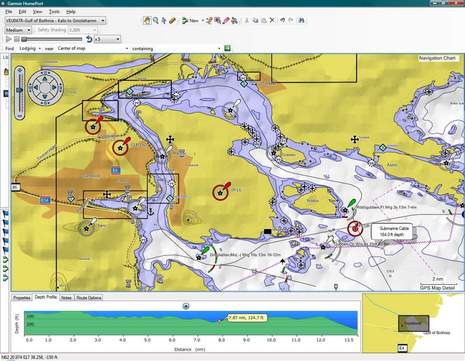 Being a natural born optimist, the longer Garmin took to solve its
route planning problem, the cooler I hoped the solution would be.  We won’t know
for sure until the November release, but HomePort is officially
announced, and judging from the product page and these screen shots, it
looks like a nifty tool for $30.  If you own a G2 Vision card, you’ll
be able to access many of its features right on Windows PC (no Mac
yet), and take the resulting plans to the boat, or just up to the
bridge, on the card.  If you only own regular BlueCharts or G2’s
imbedded in your plotter (the good idea that created the problem in the
first place), you’ll first have to copy them to a blank 2 gig SD card…

HomePort sure doesn’t look like Mapsource, which I found
useful for years, but was getting pretty clunky.  Looking at the new planning screens, I see goodies like Googly view management controls,
a multi-layer search facility, an unusual bottom profile, and a “notes”
function (I wonder if those will travel to the MFD?).  Tide prediction,
POI info, shaded relief, and port photos seem to supported but
I don’t think that’s true of auto route making (aka Garmin Guidance) or
photo maps (though apparently you can view a route in Google Earth). And there are some things on the screen below that I can’t figure out.  What is happening in the lower left window, for instance?  And what sort of vehicle is intended travel along that route or track? 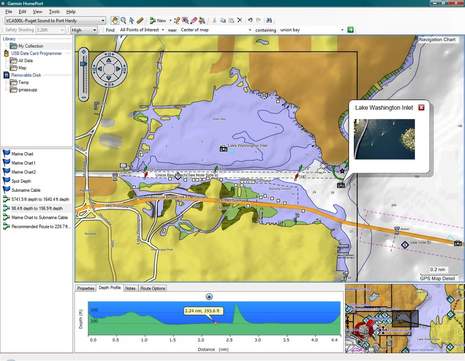