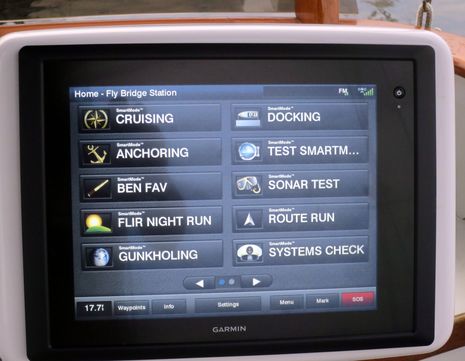 Garmin’s SmartMode station control seemed like an obviously great idea when introduced with the 8000 Glass Helm series in early 2013. The basic feature simply lets you group 8000 displays at a helm (station) and control what the various screens are showing all at once. But the interface designers went a smart step further by naming the default SmartModes after the overall tasks at hand, instead of the conventional specifics about the tools needed, like “chart/radar/cam”. Thus the 8212 now being tested on Gizmo came with CRUISING, DOCKING, ANCHORING, and FISHING modes already suggested, and I’ve been adding my own in the same task-not-tool spirit… 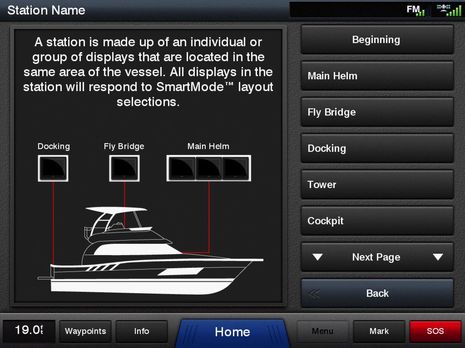 Another sign of Garmin’s interface smarts is the well-done SmartMode explanatory graphic that pops up when you set up a Station. While station names cannot be customized, there are lots of choices, and note that you can use SmartMode on a single display. In fact, that’s the only way I can test it, as the feature does not extend to the Garmin 741xs also installed on Gizmo. That may change, though, as the smaller MFDs have already been given lots of other network integration abilities. (The 741 is already sharing charts and sonar with the 8212 and I can even save screenshots from the big screen to a card on the small display.) 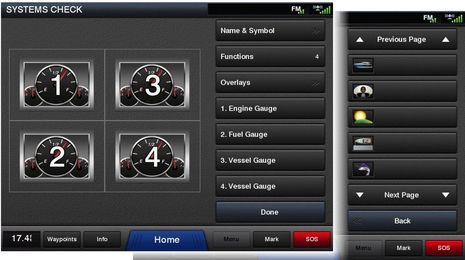 SmartMode on a single display is quite similar to setting up a regular custom screen on the 8000, but you do get to add a graphic of your choice, and by using SmartMode you’ll have two pages of custom screens available from your Home page. Note that the Functions windows would look more interesting if I hadn’t chosen four Gauge windows… 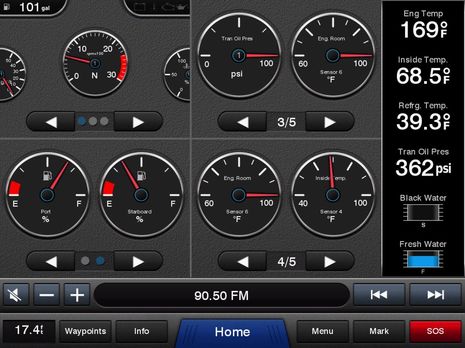 …but then again my Systems Check smartmode is pretty interesting. I had not realized until I tried this that the Garmin can now display some fairly esoteric data from Gizmo’s NMEA 2000 network, like engine room (actually exterior block) and refrigerator temps coming from a Maretron TMP100. They haven’t yet provided automatic or manual gauge configuration for these values, like they have for the tachometer and a few other common gauges, but let’s hope. I also like those tank level graphics you can add to the data bar. And it’s important to note here that whatever I select for the data bar and/or lower and upper bars, plus each window’s gauge selection, are all saved in this SmartMode. 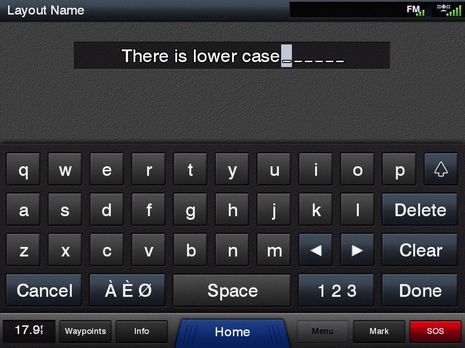 There may also be screen setup features I’ve missed. It was only yesterday that I realized I could use lowercase letters when naming things even though that upper right arrow — which even glows when in CAPS — now seems quite obvious. Note that Garmin has offered a choice of alphabetical or qwerty touch keyboards for some time. 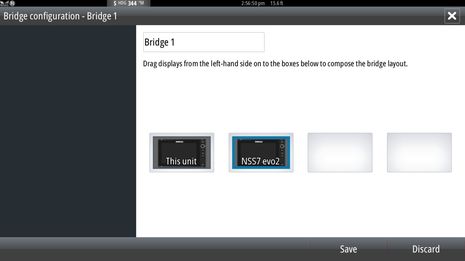 While I’ve been meaning to explore SmartMode for some time, it certainly came to mind when Simrad announced a similar Bridge Control feature in the recent update to evo2 software. A manual addendum about how to use it (and the other interesting new features) still isn’t available, but I found the Networking/Bridge menu easily and was happy to see that I could use both NSS16 and 7 for testing. What I missed (without a help call) was a new Bridge button somewhere on the Home page that will let me choose any screen presets already on each MFD for a Bridge preset. I hope to try it later today. 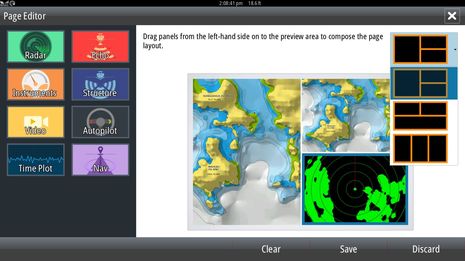 I can’t remember if it was Simrad or Raymarine who first came up with a screen editor where you could just touch slide the functions you want onto draft page, but the evo2 version seems perfected. You don’t have to specify how many windows you want; you just add functions until you’re done or the maximum is reached, and then a graphic drop-down lists shows the different ways you can arrange that many windows. Finally, anytime you’re using the screen you can adjust the window splits with a shortcut found on the menu under the power button. Nice!

In the spirit of building on your competitor’s good ideas, check out the spectacular wind gauge page that recently came to both the Garmin 8000 and 7×1 displays in a recent update. Everything you see there is by default, but you can do a fair bit of customization, like which value to chart, right from the menu button. Who would be surprised if Furuno and Raymarine have a feature similar to SmartMode and Bridge Control on their software road maps? But speak up if you want it, because there’s lots of features and improvements still possible. In the meantime, I think that many MFDs will already let us try the idea of naming preset screens for their use; maybe some of you already do? 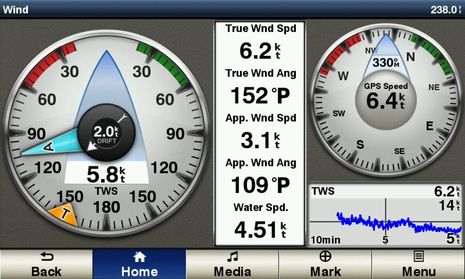