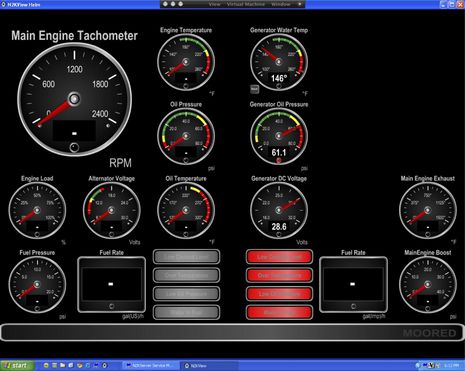 What follows is a first time guest entry by regular Panbo commenter Adam Block, who is planning a 2011 Pacific
crossing aboard his Nordhavn 47 Convexity.  Adam says “he had no idea what he was getting into when he started a recent electronics upgrade,” but he did manage to convert analog (generator) engine data into NMEA 2000 for display in the N2KView software above and elsewhere.  He’s also written a clear explanation of the options available for this tricky task, and the specifics of the NoLand RS11 he used…

Having completed the primary electronics refit on Convexity,
I’m deep into the secondary projects – nice-to-haves
like external IP
cameras and
centralized systems monitoring. I’m using Maretron N2KView
software for monitoring, but any modern NMEA 2000 digital gauge —
Maretron’s own
DSM250 or the Garmin GMI 10, Raymarine ST70, or the “coming
soon” Furuno RD33 — can display a wide range of data about onboard
systems
ranging from engines to battery banks.

Today
I’m thinking about engine data. Though Convexity
has a single primary engine, we actually have three diesel motors on
board. The
other two are a wing (get-home) engine and a 12 kW generator. Getting
engine
data onto the NMEA 2000 bus (and from there onto one of those displays)
can be easy
or hard, depending on the kind of motor you have. Owners of larger
outboards
have it easy: Mercury, Suzuki, Yamaha, Evinrude, and Honda all output
lots of
engine parameters in NMEA 2000 format, though you may need a funky
wiring
harness or digital gauge to make the backbone connection.

In general the same can be said for modern
electronically-controlled diesel prime movers; most support an engine
data
protocol called J1939 that runs over the familiar industrial CanBUS
(which
happens to be the same wiring and communications standard on which NMEA
2000 is
based). J1939 can be used to exchange data between two engines (to
synchronize
RPMs on a twin-engine vessel, for example) or to drive physical gauges —
Convexity’s
analog-looking engine gauges actually receive digital signals via
CanBUS. J1939
engine messages aren’t the same as NMEA 2000 engine messages, but
Maretron
offers the J2K100
converter box to bridge the two networks together. (It’s a one-way
bridge: the
J2K100 passes J1939 data from the engine network to the NMEA 2000 bus,
but no
information flows the other way).

That’s all fine for folks with brand new boats, you
say, but
what about the thousands of sail- and powerboat owners with older
engines that
lack electronic fuel injection and the engine computer needed to output
digital
performance data? Or in my case, what about my Lugger wing engine and
Northern
Lights generator, neither of which supports digital gauges? If I’m
adding a
complete monitoring system to the boat, it seems wrong to exclude them.
(This
is especially true of the generator, as its gauge package is in a
hard-to-see
location near the top of the stairs to the staterooms.)

It took some research, but I came up with three
possible
solutions for getting NMEA 2000 data out of my analog engines:

Based on price and capabilities — my gauges are
voltage-based
— the RS11 seemed a good fit. I ordered direct from the NoLand web site,
and
the unit arrived about a week later. In the box was a small circuit
board with
a terminal strip on one side and an attached NMEA 2000 drop cable, a
serial
cable (the RS11 needs to be programmed before use via Windows PC), a
somewhat
flimsy-feeling plastic circuit board cover, and one of those business
card-sized CD-ROMs that only work in slot-loading drives.

You can wire the RS11 directly to your engine, but I
found
it much simpler to connect to the back of the engine gauges themselves;
all of
the pickups are in one place, and I prefer to work in the comfort of the
pilothouse than the confines of the engine room. I started on the
generator
first. All of the gauges have standard male disconnects on the back. The
quick
and dirty approach for small gauge sense wires — I used a short length
of
8-conductor 18-gauge Ancor data cable — is to just bend the conductor
over the
disconnect tab and then press the female connector on the engine wire
down over
the tab. This approach won’t pass any good electronics installer’s
muster,
though, and probably violates half a dozen ABYC regulations; the right
way is
to use a standalone
piggyback
adapter, or a female
disconnect
with a piggyback connector as shown in the photo below. The RS11
needs only a single sense wire per gauge, which normally connects to the
‘S’
pin on the gauge body; as a ground reference it uses the ground pin of
the
attached NMEA 2000 cable. The NMEA 2000 bus supplies power to the unit. 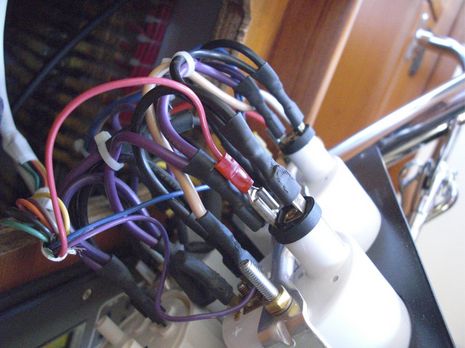 Engines and their gauges vary widely, so before it
will
output accurate data you have to calibrate the RS11 using the somewhat
rudimentary Windows application shown below. The terminal strip has two
tachometer inputs and four analog inputs. With some limitations, the
analog
inputs can be used to monitor any of the following: oil pressure; oil
temperature; engine (coolant) temperature; coolant pressure; fuel
pressure;
alternator voltage; turbo boost; and tilt/trim. Not all engines will
output all
of this data, and with only four inputs you’ll have to choose which of
these
are most important. (The RS11 can also be connected to two separate
engines, in
which case you divide the four inputs between the two engines.) 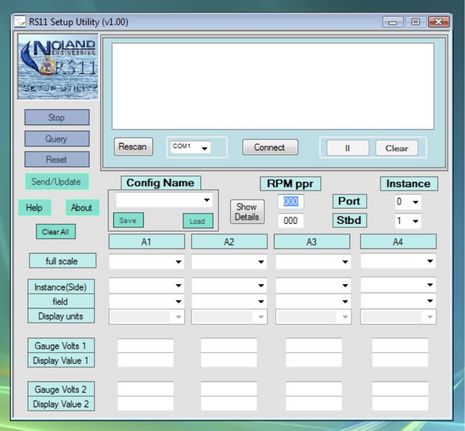 Monitoring RPM requires knowing the number of
“pulses per
revolution” output by the engine. This varies depending on the engine
type, and
the RS11’s manual does a pretty good job explaining what information you
need
to properly calibrate the unit. In my case I needed to know the number
of teeth
on the flywheel; a quick inquiry to Lugger provided the answer (126),
which I
entered into the configuration utility.

Analog calibration is a bit more complex. The RS11
operates
on the principle that there is a direct straight-line relationship
between
voltage at the back of the gauge and the actual value being monitored.
In order
to determine this relationship, you enter two voltages and actual values
into
the calibration software, which then derives the proper formula (in the
form value
= m � voltage + b,
where m
and b are constants) from the supplied data. For example, in the
case of
engine coolant temperature my measurements were as follows:

Collecting these numbers can be a bit of a chore,
especially
if they are changing as you measure them. In the case of the engine
temperature, I assumed that “actual temperature #1” was simply the
ambient
temperature of the engine room before I started the engine (it had been
shut
down for a few days). I turned on power to the engine and probed the
back of
the gauge with my multimeter to determine “measured voltage #1”. For
“actual
temperature #2” I started the engine and waited for it to warm up enough
to
show a reading on the analog gauge. I probed the voltage at the same
time as I
read the temperature off the gauge, and entered the second set of
numbers into
the configuration utility. Needless to say, analog gauge accuracy,
parallax, and
timing all contribute to the quality of the calibration. Values that
don’t
change much over time, such as oil pressure, are easier to calibrate.

With the calibration data entered into the
configuration
utility, it was time to download it to the RS11. I had some trouble
here: the
RS11 refused to accept the new settings. NoLand’s head engineer
suggested that
a reboot or two (disconnect the NMEA 2000 cable to cut the power, then
reconnect) should fix the problem, and it did. Seconds later my
generator’s temperature,
oil pressure, and output voltage popped up on the Maretron N2KView
screen (seen at the top of the entry).

As you can see, my calibration was pretty good, as
the
displayed values closely track the analog gauges: 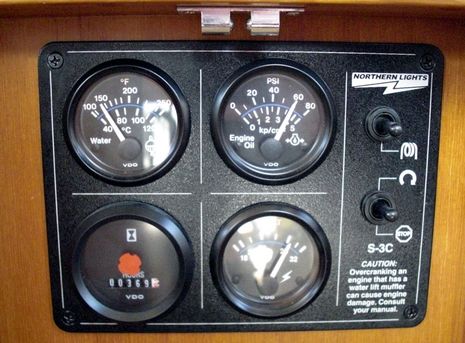 Final mounting of the RS11
interface was easy due to its
small size (3″ x 3.75″)
and light weight; I simply mounted it to the back of the breaker cabinet
and
cinched down the cables: 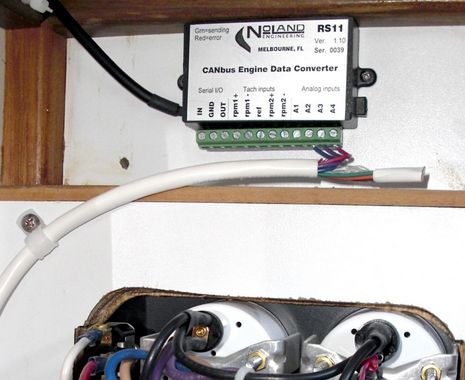 With
a little patient calibration, the RS11 is easy to install and works as
promised, though I did have a couple of issues. First, on at least one
occasion
the RS11 seemed to lose its sensing capabilities. After I left the
engine shut
off for a few days (but the NMEA 2000 network, and thus the RS11, still
powered
up), when I restarted the engine the unit sent no engine data. Rebooting
the
RS11 cleared up the problem but it’s something I’ll be keeping an eye
on.

My
other issue arose from the nature of the algorithm the RS11 uses to
calibrate
analog voltages. Some analog gauges use inverse voltage; that is, when
the
voltage from the engine’s sender drops, the value displayed on the gauge
increases. This is the case for our generator’s coolant water
temperature. When
the RS11 is calibrated, the formula it derives for this kind of gauges
has a
negative slope (that is, in that equation above, y is negative).
The
problem arises when the engine is turned off, and the voltage measured
by the
RS11 is zero. This zero voltage is spurious – it’s not a true output
from the
engine, but an artifact of the engine being off – but based on the
formula in
the RS11 it appears that the temperature is very high. In our case the
N2KView
gauge reads 254� when the engine is shut down. I spoke to NoLand about
this
issue, and suggested that the unit sense when it the attached engine is
off.
Their chief engineer confirmed they would like to add that feature – one
I
believe the ALBA-Engine does have – but that working within the
limitation of
the small amount of memory on the RS11’s circuit board was a challenge. 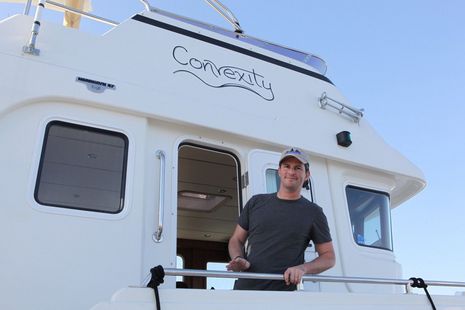 How about a Panbo round of applause for Adam Block {ed}