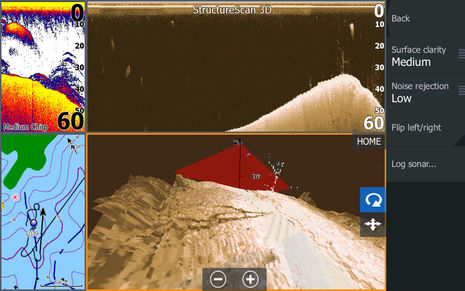 The competition around sonar burns hot on many fronts and the more the merrier, I say. At the recent iCast show Lowrance introduced StructureScan 3D, which displays in many ways like the Garmin Panoptix Down looking sonar which I saw demonstrated last February in its Forward looking version. Trade Only’s Chris Landry noticed the similarity too and reports that SS 3D will also be supported on Simrad NSS evo2 displays. The necessary StructureScan 3D transducer and module are due out in December and purportedly improve on SS HD’s standard down and side views as well as enabling the new 3D mode… 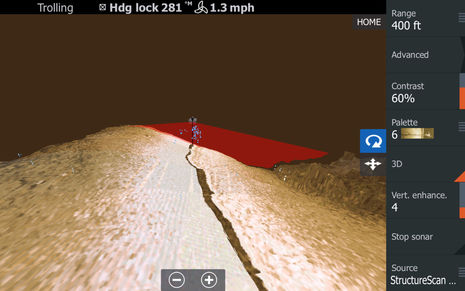 I’m a longtime fan of StructureScan as a cruising tool — and have been glad to see Garmin and Raymarine join the side-scanning fray that Humminbird started, Panbo links all — but it’s true that few Gizmo visitors easily understand the normal top-down display that I tried to explain here. Reprocessing the 2D bottom imagery into a 3D view from behind the boat (or from any other angle) with the “Leading Edge” beam pattern shown in red may well make both the technology and the bottom structure easier to comprehend. SS 3D also introduces new features like Vertical Depth Enhancement to highlight drop-offs and SelectScan to add color contrast to suspended targets like fish. We may soon see positive reports on Garmin Panoptix in actual use, but jealous Navico users may find comfort in this promising StructureScan 3D beta testing video. 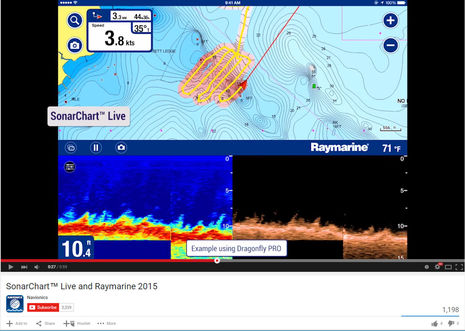 Meanwhile, Raymarine’s Dragonfly 4/5 PRO and Wi-Fish got support for Navionics SonarChart Live, and that’s true now if you’re running the iOS Boating app with Android coming soon. Users of the $199 Wi-Fish get a CHIRP DownVision window on their app charting, and with the Dragonfly Pro plotter/FF models (start at $300) you get both DownVision and CHIRP fishfinding windows, as seen in this video. Either way, this looks like a slick SonarCharts Live integration, and given the availability of both Dragonfly/Wi-Fish device and transducer RAM mounts, it would be easy to set up a tender as a survey vessel (like I did with the Vexilar T-Box).

Finally, Navico also announced the GoFree Hooked fishing app at iCast and is looking for beta testers with an iPhone 5 or above. Now, you could say that this app has nothing directly to do with sonar, but hear me out. I too was a bit surprised that the first inhouse GoFree mobile app (aside from the MFD Controllers) stands apart from all the GoFree WiFi data streaming features built into Navico electronics, but then I realized that — duh! — the ambition is bigger. Hooked begins as a free app that any fisherman can use to document his or her catches and engage in friendly competitions, regardless of electronics. Thus, it’s easy to picture a pro version that could be used to manage and/or document an entire tournament via GoFree’s cloud servers. It’s also easy to imagine how Hooked users who do run Lowrance and Simrad gear might eventually get their catch histories integrated with their Insight Genesis sonar records and even downloaded to the boat via GoFree WiFi to provide a resource that fishermen with their scribbled notepads have only dreamed of!

And can’t we assume that Raymarine, Garmin, Humminbird, etc. are anxiously minding the same GoFree Hooked possibilities? That’s what makes the fierce sonar competition so intriguing and productive, I think (though I hope that the patent part — news here and here — doesn’t dominate). I also like to contemplate how much Navico is banking on its GoFree brand and what a tight integration of apps, cloud servers, and streaming boat electronics could do for cruise logs, planning, monitoring and more. Let’s hope that battle gets hot too. 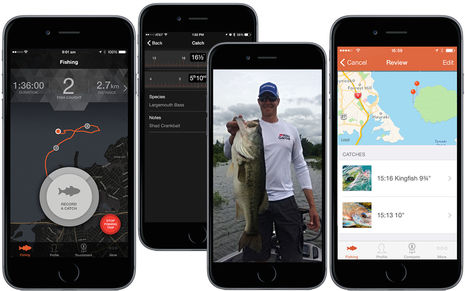