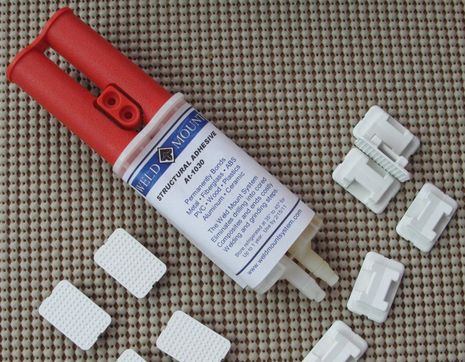 I’m especially pleased to have discovered the Weld Mount system of glue-on cable and hose mounts because much of Gizmo is balsa cored and thus I’m darn hesitant about penetrating a fiberglass skin with screws. But the Weld Mount adhesive is so easy to use, and the results so strong, that these mounts might be appropriate to many projects…

Weld Mount makes all sorts of adhesively bonded mounts that will attach to most any surface on a boat, including stainless steel studs they’re willing to hang significant weights from (videos here). But I just tried their most basic AT 1050 Wire Tie Kit, available at Defender, some of which is shown in the top photo. You can see that the nylon mounts have a large nubbled base designed to interface with lots of the acrylic glue, as well as a slight saddle for a firm fit to wire bundles or small hoses that you can cinch in with even large size cable ties.
But the magic is the 1030 structural adhesive. It’s easy to portion out and then hand mix using that double plunger syringe (Weld Mount also offers auto mixing systems), and it has a jam consistency that does make the light mounts stay wherever you put them, even on vertical or upside down surfaces. And though it starts to get thicker after a few minutes it doesn’t do a fast kick like epoxies can. But once it’s thoroughly set up, it’s wicked strong. In fact, if I pulled really hard on one of those water pipes seen below, I think it or the cable tie or the inner skin of Gizmo’s hull might fail before the Weld Mount bond.
And note my use of the Cobra low profile cable ties I wrote about it 2009. If anything I’m more fond of them than ever — there’s not a skin cutting snag to be accidentally found anywhere in this install — but I still think they’re little known. In fact, both Weld Mount and Cobra, which go together like “a horse and carriage,” seem to be relatively small New England companies that deserve more attention. I did find that Jamestown Distributors offers Cobra ties as well as many Weld Mount parts, though apparently not the little kit I tried. 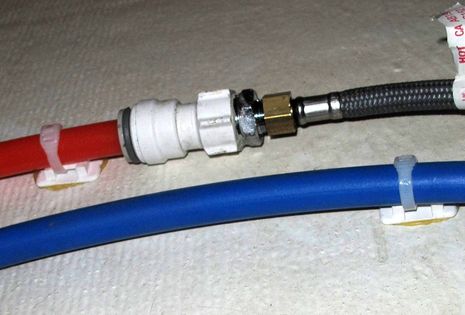