Wreck of the Lady Mary, so many lessons 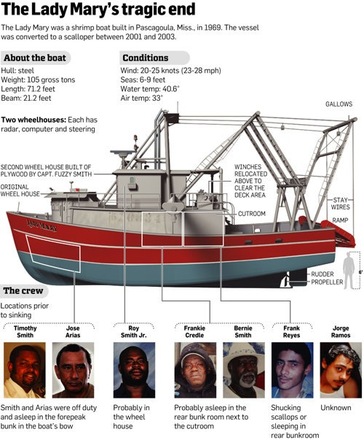 When I came across the New Jersey Star Ledger’s finely reported series on the sinking of the scallop dragger Lady Mary, I didn’t stop until I’d finished all five chapters, watched the video, and done some further research.  It may not sound like a story in the holiday spirit, but aren’t we about to gather during the darkest days of the year to celebrate light and love?  You’re not apt to forget the loving extended family at the center of this dark tragedy.  And you’ll certainly be reminded about how so many SAR gadgets and systems might and might not work… 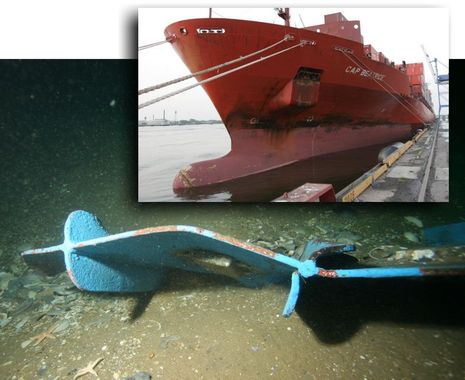 The mystery of the Lady Mary is how she sank so quickly, but I bet many of you will conclude as I have that it’s very likely she was struck from behind by the container ship Cap Beatrice.  While I have no particular expertise in ship wreck forensics, I tend to agree with the experts quoted in the article that damage like that mangled rudder above — not to mention the bent down 5-inch prop shaft — could only have been caused by the ship’s bulbous bow moving at 20 knots.  There are more photos of the Lady Mary’s damage here, as well as similar damage to another run-down dragger here.
Unfortunately this sort of story feeds the skepticism of those who think ships don’t care about running into boats, and therefore anti-collision gear like Class B AIS transponders aren’t worth the cost.  Which seems especially true as it looks like the captain of the Cap Beatrice may get away with what looks like a hit, run, and cover-up operation.  But note how his own AIS incriminated him, and that he may in fact have turned it off in his efforts to escape responsibility (all conjecture, mind you).  If the Lady Mary had had a transponder would the collision have been avoided, or at least been more easily investigated after the fact?
And there are other questions.  Would a DSC VHF alert have gotten the notice of nearby fishing vessels and saved a few lives?  How about if the Lady Mary had had a GPS EPIRB instead of a standard issue model, which takes longer to geolocate?  And if the mistaken registration number really did delay the search, isn’t that why through-satellite testing is so valuable?  My hat is off to Amy Ellis Nutt and Andre Malok for their efforts covering this story, and my heart is out to Fuzzy Smith and all the other family members involved.