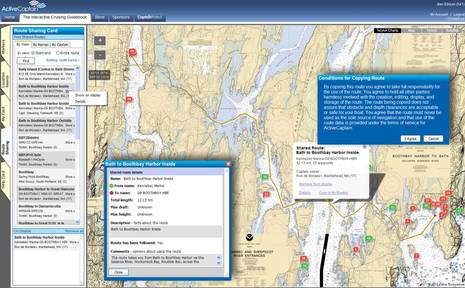 When I first heard about ActiveCaptain’s plan to enable route sharing amongst it users, it was via a group email from a very experienced bluewater cruiser “in absolute shock that a boat owner/skipper navigating a boat through unfamiliar waters would use somebody else’s waypoints.” I posted the whole note for discussion in the Forum, but only AC developer Jeff Siegel and I participated. Well, now route sharing is fully enabled at the ActiveCaptain site, as illustrated in the screen shot collage above, and I still don’t understand why anyone would object, particularly given AC’s careful implementation…

What you can see in the top image is how I searched a particular area of midcoast Maine for available routes by chart view and “start/end” — there are several other search methods — and then chose to display one called “Bath to Boothbay Harbor Inside.”  I also chose to see the Details box, and I zoomed in to check the work of the creator. In fact, I made this tricky passage many times in my youth — even in a 35-foot schooner without auxiliary power, as I once bragged about in an entry citing the strong currents thereabouts — and I could see that Ron de Moraes had paid close attention to the nav aids and the dangers. Then I right clicked on the route so I could copy it to my own folder (My Card), and that’s when I got that blue-background Conditions warning. I thoroughly agree; one does not copy routes without taking responsibility for the consequences.
I also experimented with importing one of my own routes into AC for sharing, and that’s when I discovered a fairly significant limitation. I like to name waypoints in a useful way, especially when using a PC charting program where that’s relatively easy work. AC, however strips those names out. There may be a technical explanation for this limitation, but I did notice recently that EarthNC’s new routing feature exported .gpx files to Coastal Explorer and Memory Map with custom waypoint names intact…. 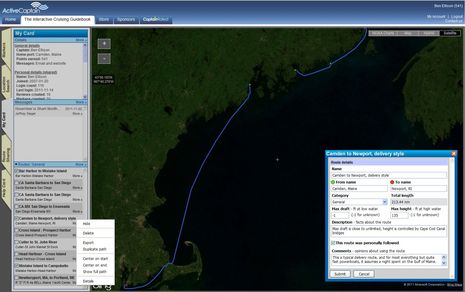 On the screen above is my “Camden to Newport, delivery style” route that you can check out on AC (along with a couple of others that I’ve copied into my own folder and exported for further checking and possible use in the various programs and MFDs I test). But below you’ll see the route’s waypoint details that I created in CE which did not get to AC. You can download that Cam-Newport.gpx file here. It would also be nice to pass waypoint notes around — so, for instance, you could warn a fellow Captain about where the serious current whirlpools can pop up along that Bath-to-Boothbay trip — but I’m not even sure the GPX format includes notes.
At any rate, I think that ActiveCaptain’s route sharing feature is pretty slick, and that it makes you treat the act of copying a route seriously, but I would like to see sharing of even more details if possible. Have any of you tried it, and what do you think? 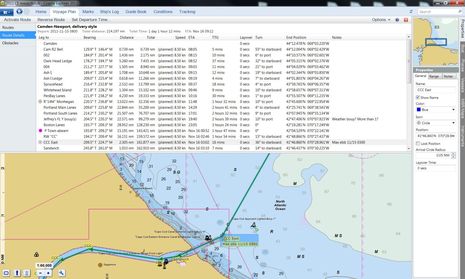