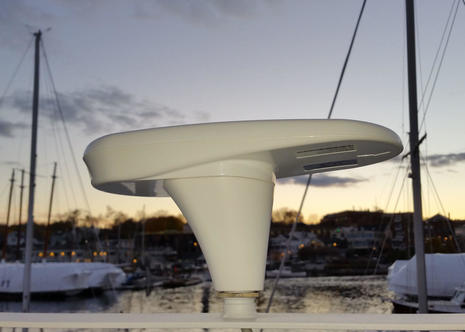 There’s lot to report from the Fort Lauderdale Show, but the calendar dictates that I first write about this Seapilot satellite compass. That’s because a startling 50% show discount is still available this week, so you can buy the Vector Compact-N NMEA 2000 model seen above for $500 simply by applying the code “FLIBS2015” in the shopping cart. The Compact seemed like a relatively good value at twice the price when I first discussed its features last November, and since then I’ve seen it perform pretty well on Gizmo…

I don’t know why Seapilot is selling the Compact at half price — and all its Class B AIS transponders, too — but maybe it’s because many boaters don’t yet realize how much a GPS (GNSS) compass like this can do. It not only supplies a fast Heading source for autopilots and radar overlay, regardless of a vessel’s magnetic disturbances and without calibration; it also provides precision GPS positioning and Attitude information like Roll and Pitch. Except for Depth, all the nav data seen on the Simrad NSS7 evo2 charting screen above is coming from the Compact, and the Heading is very accurate even though Gizmo is tied up and therefore the Course over Ground (COG) is random.

And you can see even more Compact data output on the diagnostic list the NSS can show for any N2K source (though I don’t know what Simrad means by Attitude Yaw, which is the same as Rate of Turn, I think, and not mentioned by Seapilot). The sensor data seems reliable in all conditions, too, even with the test Compact mounted on Gizmo’s port spreader with lots of other antennas around and above it. In fact, I have often used it to provide smooth “gyro stabilized” Heading to Gizmo’s Simrad autopilot since I installed it in North Carolina last April. 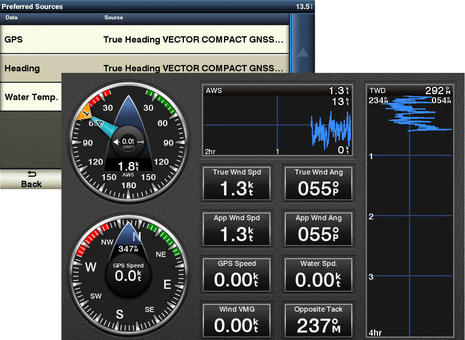 But I did sometimes test the Compact on the boat’s other N2K network, and you can see it here chosen as the preferred GPS and Heading source for a Garmin 741. And if I had thought to set up that Garmin 8212 screen better, you would see the Compact helping to calculate Ground Wind (because on most marine electronics, Heading is a component of Ground Wind but not True Wind, though that’s a different story). 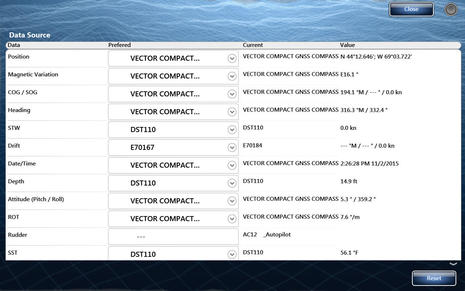 This Furuno NavNet TZT screen reveals Vector Compact data output details particularly well, but also seems to show a glitch. The Magnetic Variation here in Maine is West 16°, not East, and the mistake is not simply a poor translation of binary data that’s used for internal math, not for normal navigation display. The main TZT data boxes show a Magnetic Heading 32° different — 16 times 2 — from the Simrad, Garmin, and Raymarine screens all listening to the same Compact compass. So it looks like a Furuno problem, but then again Variation correction can be a tricky area of NMEA 2000, especially on a mixed brand network, and Furuno is one of the few vendors that even lets a user choose a source if there are multiple available. (And the same TZT will display accurate True Headings, so the glitch is not insurmountable.) {11/15: What I missed is that the Furuno TZT itself supplies Variation by default, and so the error seen above may be coming from the Seapilot Compact. See comment below.} 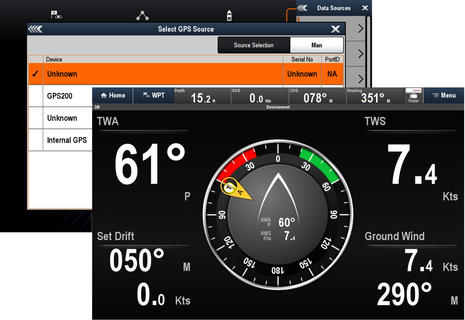 Meanwhile, Gizmo’s test Raymarine a77 could not specifically identify the Vector Compact as a GPS source, but Ray’s Lighthouse operating system has long been weak at NMEA 2000 utilities (though getting better with every software update). Most networks don’t have four different brand GPS sources, and the a77 used the Compact data fine once I picked the right “unknown” source (or automatically). In short, the Seapilot Compact seems to offer solid GPS and Heading performance, but the complex data set in the background may not be understood perfectly by every N2K device. In fact, Seapilot updated the Vector Compact firmware to correct some minor issues since sending me the test unit, though updating requires returning the unit because no display with an SD card can apply it.

You also can’t calibrate a Seapilot Compact from a different brand display, because that just isn’t done over NMEA 2000 (except for some cases where the calibration values are kept within the display instead of the sensor, like Furuno). But there is generally no calibration needed if the sensor is installed well, and the Compact hardware makes that easy. Note in the top photo, for instance, the thin lock nut which lets you precisely align the Compact instead of messing with tape or thread adhesives. Note, too, that the last step is screwing the compass to the pole mount adapter from above, so there’s no twisty cable issue. The Compact can be flush mounted, too — and will practically disappear on many boats that way, because it’s so small and low profile — but precision first time alignment, or an intermediary plate, will be needed.

But maybe you don’t want a GPS compass, and I’ll add that an even more inexpensive Simrad GS25 can provide sufficient Heading and GPS info to Gizmo’s autopilot, etc. How about a top-of-the-line Seapilot CTRX Graphene+ AIS transponder with NMEA 2000 and a built-in antenna splitter for $550? Note that Seapilot is the recreational brand of the AIS experts at True Heading. The 50% discount code “FLIBS2015” is purportedly good until Nov. 15 and also applies to the SeaPilot app, which recently got a weather routing module. 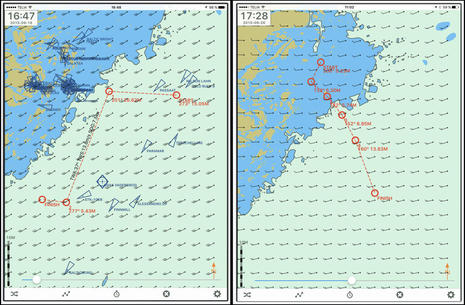